Virgil Hickox (1806-80) was a Springfield merchant, mill operator and bank and railroad investor. He also was a close friend of Stephen Douglas and managed Douglas’ successful 1858 U.S. Senate campaign against Abraham Lincoln. 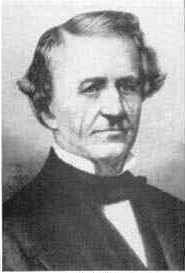 Hickox, a New York native, arrived in Springfield in the early 1830s. With his brothers, Horace and Addison, he owned a general merchandise store and operated the Hickox Mill, located on Spring Creek near the modern intersection of Veterans Parkway and Jefferson Street.

In 1851, he was among the organizers of the Chicago & Alton Railroad, and he remained on the railroad board until 1871. He also served as president of the Springfield State Bank starting in 1871. The bank ultimately failed, partly because of the national financial panic of 1873, although the owners, including Hickox, vowed that depositors would not lose any money. Hickox’s other investments, notably in real estate, suffered at the same time.

Hickox was a Democrat politically, although his views might justifiably be described as libertarian today.  In a biography he dictated, reprinted in the Hickox entry from findagrave.com, Hickox described his beliefs:

He believes that the United States should not own any property except what is necessary for forts and arsenals, and for the transaction of business at the seat of government. He also holds that the whole postal system should be abolished, and that the laws of trade should regulate the transportation of what is called mail matter in the same manner as such laws regulate all other transportation. He thinks that if men and women were as careful to obey the scripture injunction, “six days shalt thou labor,” as they are to rest on the seventh, there would be less suffering from want.

The writer of his Illinois State Journal obituary (published Feb. 3, 1880) agreed that Hickox was “a man of peculiar views, in many respects, and somewhat opinionated, but withal possessed of an innate sense of justice that frequently led him to apologize to those whom he had offended.”

About his own adopted home town, the obituary added, “He had an abiding and unfaltering faith in the future of Springfield….”

Hickox’s home on Capitol Avenue, known also as the site of the Norb Andy Tabarin, has been designated a city landmark by the Springfield Historic Sites Commission.

This entry was posted in Historic Sites, Mills, Prominent figures. Bookmark the permalink.