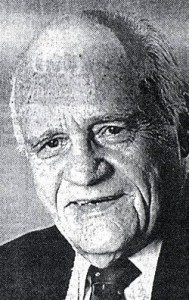 In 1945, Hall joined with fellow teacher Les Nimmo to create Horace Mann (originally named the IEA Mutual Insurance Co.). The firm at first offered only automobile insurance and did so only to Illinois teachers, but it quickly expanded into other states and other financial products. Hall retired from Horace Mann in 1963.

Hall’s involvement in a variety of civic and historical organizations earned him the title of Springfield’s First Citizen in 1987. Hall chaired the Springfield Historic Sites Commission, worked to limit commercialization of the Lincoln Home area, was president of the Sangamon County Historical Society when the Old Capitol State Historic Site was restored, and served as vice president of the Illinois State Historical Society.

He also was involved in the Friends of Lincoln Library, the Vachel Lindsay Association and the Commission on International Visitors, among other activities.