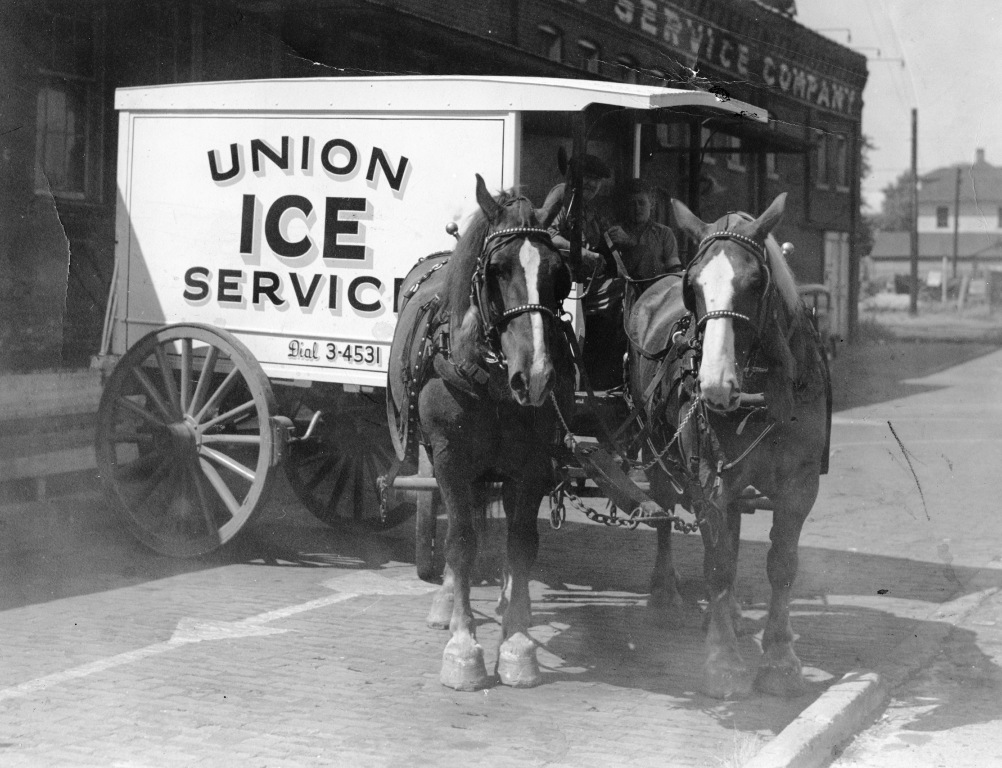 Before artificial refrigeration was invented, ice was cut from rivers, ponds, and lakes during the winter and sent to storehouses, businesses, and homes.

Cutting, storing, and delivering ice was big business. The Illinois State Museum reported  ice companies in Illinois employed between 2,600 and 3,500 people in the late 1800s.

One of the first icemen in Springfield was Enoch Payne, according to the 1931 Journal article. He opened an ice house in 1862 on the Sangamon River at Carpenter’s Mill, near where Peoria Road crosses the river.

The ice business was so profitable, Payne soon had competition, the newspaper said. Ice also was cut and stored at Koke’s Mill near Koke Mill Road and Washington Street;  Spring Creek, west of the city; other sites on the Sangamon River; Reservoir Park (now the site of Lanphier High School); Mud Lake, just west of Riverton; and off Clear Lake Avenue. The 1876 Springfield City Directory lists two ice dealers:  J.M. Striffler, whose ice house was at 128 W. Jefferson St., and S. P. Townsend, whose office was at 216 S. Fifth St.

Joseph “Shucker” Buckles told the University of Illinois Springfield’s Oral History Project that icemen worked on a pond in his home town of Pawnee when he was a child in the early 1900s.

“When the weather got around zero for four or five days, that ice would thicken to where the block of ice would be eight to ten inches thick. That’s when they started to harvest it, and they’d try to fill their ice house at that time.”

In the early 1900s, horses pulled saws to cut the ice, according to the Illinois State Museum. Buckles said the Pawnee icemen used hand saws.

“It’s a little bit different saw than the crosscut saw that you use to cut wood with, because the teeth are longer,“ he said. Workers cut ice chunks about three square feet in size and floated them down the river or hauled them to ground and loaded them onto wagons.

Ice harvesting provided temporary winter jobs, but it was hard work and could be dangerous. Underwater springs, floating ice chunks, and weak ice made the job hazardous. “Not a winter passed that did not exact its toll of human lives…” said August Striffler in the Journal article; his father was in the ice business.

Ice houses varied in size, but they all served as large deep freezes to keep ice through warm weather.

Sawdust was in big demand. “They would mix sawdust and put it on this ice to keep it from thawing, and that would go practically all summer and supply the whole town,” Buckles said about Pawnee’s ice house.

“A lot of people had a little icebox (in their homes) you could put twenty-five pounds (of ice) in. Some of them was bigger — fifty pounds,” he said.

Artificial ice was being offered by companies in Illinois by the late 1880s, according to the Illinois State Museum.