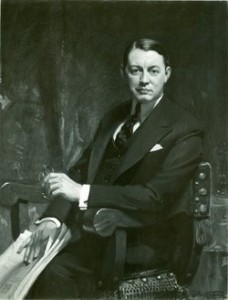 Robert C. Lanphier (right)was the engineering genius behind the creation of Sangamo Electric Co., which was incorporated in 1899. In his section of a privately published booklet,  Sangamo: A History of 50 Years (1949), Lanphier related his first meeting with electricity pioneer Thomas Edison.

Mr. Edison himself was very pleased with the amperehour meter, and promptly had one put on Mrs. Edison’s electric car, and also wrote a number of his friends in this country and abroad, strongly recommending Sangamo meters. One day early in 1911 we had a letter over his own signature saying that the meter on his car needed some repairs, and asking where to send it. At that time we had no service department at New York, so I wrote him to send it to Springfield.

He sent it, and asked us to hurry it back, so, as I happened to be going to New York, I took the meter with me to East Orange, and thus met Mr. Edison for the first time. His son Charles took me up to see his father, whom we found in his laboratory, with his head against a phonograph case, for, owing to his deafness, this was the only way by which he could hear, or rather, sense records. When his son introduced me as “the fellow who makes those Sangamo meters,” Mr. Edison looked up and said, “Young fellow, Mrs. Edison can’t run her electric without your meter, so why couldn’t you fix it up nearer than out there near Alaska! You must have a service department at New York.” So we started one there.

Then followed a most interesting talk about his early work on meters, not only his famous chemical meters, but others with which he had experimented. I went to see him several times in later years, and always found him kindly and interested, but that first meeting with him stands out as one of the great experiences of my life.