The Northern Cross Railroad, the first railroad in Illinois, briefly operated from Springfield to Meredosia, giving central Illinois long-coveted access to the Illinois River and then the Mississippi.

The line was one of eight railroads called for in the state’s Internal Improvements Act of 1837, a $10 million construction plan that H.J. Stratton, writing in 1935 for the Journal of the Illinois State Historical Society called “more than bold; it was foolhardy.” (State Rep. Abraham Lincoln voted for the Internal Improvements Act, apparently in a trade for other legislators’ votes to move the state capital to Springfield.) 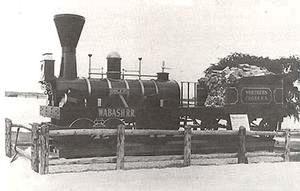 The Northern Cross originally was planned to run across Illinois from Quincy to the Indiana state line. In the end, however, the Springfield-to-Meredosia segment of the Northern Cross was all the state had to show for its abortive railroad investment — and even that ultimately became a fiasco.

“The first rail laid in the state was at Meredosia, on … May 9, 1838, on what was called the Northern Cross Railroad,” John Carroll Power wrote in his History of the Early Settlers of Sangamon County (1876). “The first locomotive arrived at the same place September 6, 1838, on the steamboat Chariton, and was put on the track and first turned its wheels on the 8th of November following.

“It required more than three years to complete the road to Springfield. The first locomotive was run in to Springfield, February 15, 1842. …”

The Illinois State Museum’s “Harvesting the River” website describes the experience of riding on the Northern Cross.

Passenger cars were the size of buses, with a row of seats down either side. Even though the trains ran at a comparatively slow speed, passengers slid down the seats because the train’s link and pin system of adjoining cars caused jerks on starting and stopping. In the engines, water hoses could freeze in the winter, and passengers may have had to help crew load wood at refueling stations. None of the signals, specialty cars, telegraph, and amenities known today existed on early rail lines.

The rolling stock consisted of a locomotive made by Rogers, Grosvenor, and Ketchum of Newark, New Jersey. “The Rogers” was shipped in pieces to Meredosia by riverboat, accompanied by the engineer in charge of assembling it. Locals were taught to run the engine.

The train “operated on a leisurely but regular schedule,” Stratton reported, going westward on Mondays, Wednesdays and Fridays and returning eastward on Tuesdays, Thursdays and Saturdays. Freight and riders then could reach St. Louis by steamboat. When the road operated at peak efficiency, the entire trip from Springfield to St. Louis took 23 hours.

But it wasn’t always possible to operate at peak efficiency. Frequent stops for water and wood lengthened the journey, and farmers were even known to steal rails for use as sled runners. An added danger was “snake heads,” rails that had an unsettling tendency to come unspiked at the ends and curl up, potentially piercing a train’s floorboards. Stratton repeats a story about one such incident (originally told by Samuel Willard).

Presco Wright of Springfield, told me that he and a friend were about to start on the same car. While awaiting its coming, the friend said, ‘Come, Press, let’s go and take our last drink together.’ The car had gone but a few miles when a snake-head came up through the floor, struck his friend under the chin, and pushed to his brain, carrying him up bodily, a quivering horror.

The need for ongoing maintenance, however, became the railroad’s biggest problem. By the time the state leased operations of the Northern Cross to Col. John Taylor in 1843, tracks and locomotives were in such bad shape that steam-powered speed was limited to six miles an hour, down from an average 15 mph the year before.  Taylor was even allowed to use mules rather than locomotives to pull the trains — “while,” as Stratton put it, “the stagecoaches dashed by in a cloud of dust.”

Fed up, state officials sold the Northern Cross in 1847 to Nicholas Ridgely and Thomas Mather of Springfield, who paid $21,000 for infrastructure that had cost Illinois more than $750,000 to build. Ridgely and Mather soon sold the railroad to “Eastern capitalists,” according to Paul Angle. They rebuilt it and reopened the old Northern Cross in 1849 as the Sangamon and Morgan Railroad Company. (The line eventually became part of the long-lived Wabash Railroad.)

Farmers saw benefits almost immediately.  The week before the S&MRR began running, “corn in any quantity could be had in Springfield for 15 cents a bushel,” Angle wrote. “(A) week afterward it was scarce at 25 cents. … The railroad was a success.”