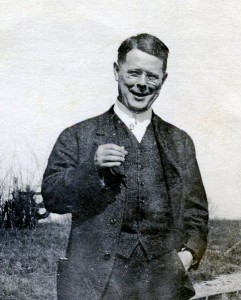 Dr. George T. Palmer was a lifelong advocate for better public health and social services, with a special interest in therapy for tuberculosis.

Palmer (1875-1943), the grandson of Gov. John Palmer, began his medical practice in Chicago, but moved to Springfield in the early 1900s. He was named the city’s first public health officer in 1908 and started the Springfield Tuberculosis Association in 1911.

Palmer established Springfield’s first tuberculosis sanatorium, in a remodeled farmhouse on 10 acres of land at the west end of Lawrence Avenue (then outside Springfield city limits) in 1913. More land was acquired and new buildings constructed in 1923.

Fresh air and bed rest were then the standard treatment for tuberculosis, and the sanatorium was originally called the Springfield Open-Air Colony. The name was later changed to Palmer Sanatorium, and Dr. Palmer continued to operate it until his death. (First Presbyterian Church later converted the property to a home for the aged, the Illinois Presbyterian Home; as of 2021, the expanded facility was the Fair Hills Residence of the Illinois Presbyterian Home, 2005 W. Lawrence Ave.)

Palmer was appointed Illinois’ assistant public health director in 1917 and served as chairman of the state committee on tuberculosis during World War I. He wrote extensively on medical issues, again especially on tuberculosis, in both professional and lay publications, and he preached sensible approaches to health and illness prevention whenever he could.

Palmer expressed his belief in the value of medical science, open air and exercise in a speech he gave to the Illinois Farmers Institute’s Department of Household Science in 1911.

Signs and omens and charms have no more to do with health than with raising corn and breeding cattle, and the sooner we realize this, the better men and the better corn and the better cattle we will raise. Our health, our corn and our cattle are very much what we make them.

There are thousands of such superstitions, some of them with a grain of truth to back them — most of them with no more foundation of fact than there is to a nursery rhyme. In a great book of three volumes, devoted entirely to bad signs and charms to prevent calamity, I found one sign that is worth remembering: If you lose your garter there is apt to be a calamity! …

Open your windows and raise your shades. Suppose the sun does fade the carpet and suppose a little dust is blown in. There is more health in one open window than in a thousand bottles of Peruna or a thousand barrels of Piso’s Cure for Consumption. …

Let us encourage our girls to go without their hats, to abolish parasols and to destroy their veils. Let them be tanned and sunburned and healthy. … Let’s have our girls as brown as berries if need be; so freckled that the freckles overlap; strong; agile; bubbling with health and reflecting back the sunshine and fresh air they have absorbed. Encourage them to sing and shout and run and whistle. …

Don’t follow fads with your children. Don’t give a little one cold baths unless you are sure they agree with him. Don’t believe all you read on breakfast food packages and don’t get the idea that bran under another name will take the place of bread and butter and meat and eggs. … Create in your children a desire for good health rather than a fear of sickness. Impress upon them that proper living and avoidance of hurtful things will make them strong and big and effective. Don’t attempt to frighten them into good habits by gloomy promises of sickness, medicine and doctors.

Let your boys and girls join in the chase after the spirit of well being and they will enjoy the game. Don’t cause them to cringe in fear before goblins and demons of disease .

Palmer also helped design the 1914 Springfield Survey, a groundbreaking citywide study of social conditions in the community. He was a member of the 24-person organizing committee, and Palmer was one of those asked to evaluate the effort for the survey’s summary volume in 1920.

In his summary, Palmer suggested Springfield had been attacking many of the evils the survey identified well before the survey was undertaken. “The very fact that a community realizes the need for a survey indicates that that community has (already) experienced a considerable degree of social and civic awakening,” he wrote.

Palmer cited several reasons behind that awakening, but gave the lion’s share of the credit to a single factor. “More important, women are voting in all municipal elections and are serving on the board of education. The voting of women goes further in altering the social and civic complexion of a community than any other living thing.”

Palmer described his life’s work in a single, lengthy sentence in his unpublished autobiography, as quoted in his obituary on June 15, 1943:

“I taught diseases of children, established a pioneer infant feeding charity, engaged in communicable disease work, had charge of the last old time yellow fever quarantine the world will ever know, served as municipal health officer, conducted one of the earliest sanitary surveys, did amateur work in almshouses and with paupers, dabbled in housing, taught public health nurses, conducted tuberculosis conferences and clinics, inspected tuberculosis sanatoria for the federal government with sideline adventures in sewage disposal and the tuberculin testing of dairy cattle and established my own sanitarium for tuberculosis.”