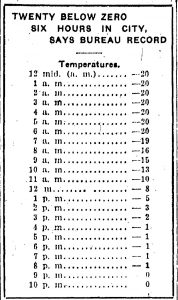 A massive blizzard, carrying heavy snow, powerful winds and temperatures as low as 20 below, struck the city on Friday, Jan. 11, 1918. Springfield already was under a blanket of snow, and when the new storm was over, the accumulation on the ground came to more than 14 inches, the Illinois State Journal said.

Never before, in the memory of the present generation or in the memory of the generation preceding it, has Springfield experienced a more complete stifling of activities, business, social and religious, than that which the blizzard and the snow brought with it yesterday. Deprivations and suffering here were the common lot of all of Sangamon county, and of the entire central Illinois.

Getting around – more accurately, not getting around – was the key factor in the emergency. Trains couldn’t move into or out of the city, and Springfield’s streetcars simply stopped running.

Setting a new precedent, the Springfield Gas & Electric company (the streetcar operator) at 7 o’clock last night gave in to the weather and withdrew all its cars.

Lacking mail trains, if it had not been for telegraphy and the telephone, the city would have been isolated. Neither automobiles nor horses could encounter the gale.

Residents sheltered in their homes, but many were without food or, worse, with no coal for heating.

Streetcars were Springfield’s lifeblood in 1918. Even despite a falloff in ridership the year before, when a strike by streetcar workers turned violent, somewhere between 10,000 and 20,000 people appear to have ridden city streetcars every day. (See “Ridership note” below.)

Even a dusting of snow on the rails could bring a streetcar to a stop, but the company usually coped with snowfalls by running “sweepers” – streetcars fitted with what essentially were revolving brooms – along the streetcar tracks. City government workers, meanwhile, tried to clear streets using scrapers, blades pulled by horses or gas-powered vehicles that normally were employed to level ruts in unpaved roadways.

In the 1918 blizzard, however, both approaches fell short. The Journal explained the problem in a Jan. 12 story.

Then the vehicles and automobiles fell in behind the sweeper and had easy running, but the poor street car motormen for whom the path was cleared were left behind to stamp their feet and say things between their teeth.

“On the Rutledge street line,” Mr. (A.D.) Mackie (Springfield Gas & Electric general manager) said, “fifty-one wagons and automobiles followed the sweeper out, and a dozen or more have followed it on every other trip. This is just the time the city scraper should be out.

“If orders could be given to have snow scraped a wagon’s width each side of the car tracks, conditions for both of us would be greatly improved.

“But as it is,” he continued, “… yesterday the city scraper started and scraped snow back on our tracks. Then our sweepers threw it off the track again. Traffic follows the sweepers and our cars are stalled.”

City Streets Com. Frank Hamilton had tried to get ahead of the snow. On Tuesday, Jan. 8, according to the Journal, he placed an order with Springfield-based Baker Manufacturing Co. for “an 8-foot snow plow to be attached, when in use, to the front of one of the waterworks motor trucks. The plow is to be delivered today.” 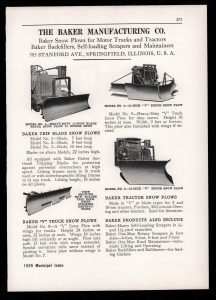 Hamilton said the plow would clear a path a mile long in a half-hour. “(I)t is believed that the snow can be cleared from the streets in such a way as to allow unimpeded traffic in a comparatively short time,” the Journal reported.

Baker Manufacturing, however, was missing an important piece for the plow, so delivery was delayed until Tuesday, Jan. 15. The blizzard, however, didn’t wait. As a result, for a day or two, the city resorted to clearing streets downtown in time-honored fashion: gangs of men shoveled snow and threw it into horse-drawn wagons. The snow then was dumped into the Town Branch sewer via a manhole at First and Adams streets.

Following a test around the courthouse square Jan. 15, the plow finally went into full operation Jan. 16, the Journal reported.

(City garbage superintendent Robert) Goodwin stated yesterday (Jan. 15) that the main streets will be attacked first and when thoroughly cleaned, those further out will be gone over until the entire streets of the city will have been cleanly swept of snow.

Twenty wagons worked yesterday cleaning snow from street crossing, and while a great deal was accomplished by the teams, it is expected the newly acquired plow will do the work in a much shorter time and without tying up the city’s entire force of men and horses.

Both the city streetcar system and intercity railroads were back in full operation by Jan. 16 as well. For the next several years, the city of Springfield seems to have used its new plow only in the worst of snow conditions, but Baker Manufacturing saw a market: by 1929, it sold a variety of snow plows to cities and other road agencies.

This is a very rough estimate, based on a figure the streetcar company provided in 1919, when the company asked to increase its basic fare from six cents a ride to seven.

The company said then the extra penny would bring in $60,000 a year, which suggests the company expected to provide six million rides per year. That averages to more than 16,000 rides per day. That calculation, however, doesn’t consider people who used discount passes, as many regular commuters no doubt did, and it also makes no allowance for the fact that ridership probably was lower on weekends than during the workweek.

This entry was posted in Disasters, Local government, Transportation, Weather. Bookmark the permalink.