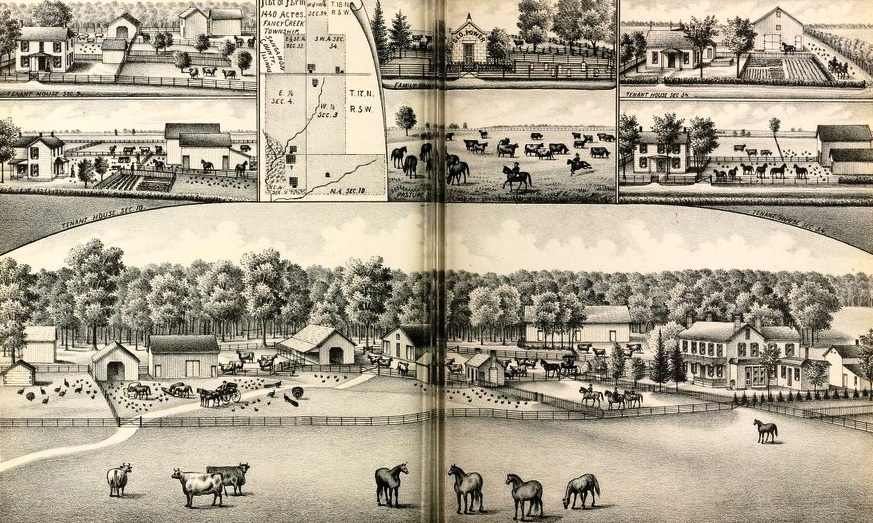 Kentucky-born George “Squire” Power (1798-1886) and his wife Nancy emigrated to Sangamon County in 1821 and built a log cabin on the current farmstead site. “He commenced business in Sangamon county with a total cash capital of five dollars,” John Carroll Power reported in his 1876 History of the Early Settlers of Sangamon County. “He has now a stock farm in one body of two thousand acres.” 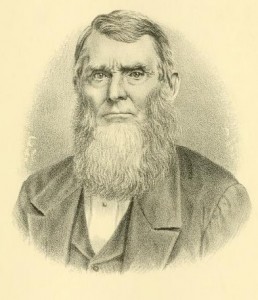 In 1828, George Power built a two-room frame house, the first frame building in the county north of the Sangamon River. The Power family lived in the building, but Power — who had been named a justice of the peace the same year– also held court there.

Tradition says Lincoln presented his first case there before Power in 1836. No records exist of Lincoln’s first case, whether or not it was argued before Power. But longtime Illinois State Register editor V.Y. Dallman once reported a probably apocryphal version:

According to (Sangamon County attorney) Clayton Barber, there is no definite record as to this first lawsuit, but Mr. Barber believes it was the suit involving the killing of a dog in which Lincoln defended the man with the shotgun who killed the dog! The owner of the dog insisted that the man who shot the dog should have used ‘the other end of the gun,’ to which Mr. Lincoln replied, “that would have been all right if the dog had come at him with the other end.”

Power became wealthy raising cattle and his own line of Morgan horses, bred specially to pull wagons or buggies.  In July 1835, for instance, the Sangamo Journal reported in an item titled “Riches of Sangamo” that Power had dispatched a herd of 816 cattle to the Philadelphia market. “They were in fine condition, and it is said, were a better lot than were ever collected in this county. This country is particularly well calculated for the raising of stock, which find a ready sale at good prices (emphasis in original).” 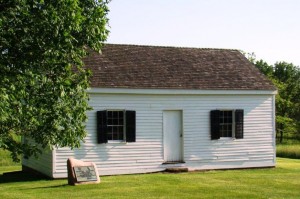 Power built a new home, a brick mansion, in 1850. The old courthouse is still on the farm, although it was moved closer to the main house sometime before 1870 to protect it from cattle damage. It is the oldest remaining Illinois building associated with Lincoln, according to the application filed when the Power Farmstead was nominated to the National Register of Historic Places.

The National Register listing for the Power Farmstead, approved in 1989,  includes 11 contributing buildings and 98 largely unchanged acres on the site.  (The Power farm took in 1,500 acres as of 2013.)  Even the privy remains, the application said.

“This cohesive unit of immaculately preserved structures represents an outstanding example of the farmstead layouts typical of 19th century county farms,” the National Register application said. There is ” no other Sangamon County farm with as many remaining 19th century buildings and structures, most in the same location as a century ago,” it added.

George Power remained active until late in life. When nearly 80, according to the National Register application, he was awarded a gold-headed cane  for the “most skillful feat of horseback riding by an elderly gentleman” at the Sangamon County Fair.

George and Nancy Power and several of their descendants are buried in a small cemetery on the grounds of the farmstead. (Among other burials there are several slaves who Power freed in the 1830s. They remained on the farm as employees after emancipation. )

The farm continues to be owned by descendants of the Power family. Neither the cemetery nor the property in general is open to the public.

More information: National Register of Historic Places application, available in Sangamon Valley Collection at Lincoln Library. See also Power Farms: The Story of George Power and the Illinois Farm He Developed, a booklet by Harry Estill (one of the farm’s later owners), published by the Sangamon County Historical Society in 2011. The booklet is available from the society.