John Carroll Power on the founding of Springfield 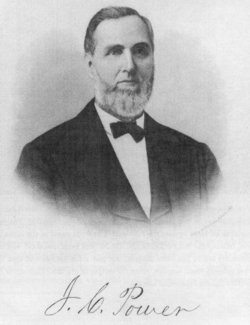 John Carroll Power (1819-94), custodian of the Lincoln Tomb from 1874 to 1894, also wrote several books, including two important early histories: History of Springfield, Illinois, its attractions as a home and advantages for business, manufacturing, etc. (1871); and History of the Early Settlers of Sangamon County (1876). Both books benefited from the fact that many of the early settlers Power wrote about were still alive or, if not, their children were.

Power did not explain how he obtained information for his uncharacteristically lyrical description of Elisha Kelly’s decision to stop in the Springfield area. However, it’s reasonable to assume his sources either had known Kelly or themselves had experienced the bounty of Spring Creek in the early years of European settlement.

The “Kelley cabins,” centered around what now is the intersection of Second and Jefferson streets in Springfield, were the nucleus of the early Sangamon County settlements. That led to Springfield being named the county seat in 1821. Here is Power’s summary of those events, included in his 1876 History of the Early Settlers.

“Towns and cities are born, live, and die, subject to the contingencies of birth, life, and death, analagous to that of human beings. About the year 1818, an old bachelor by the name of Elisha Kelly emigrated from North Carolina to this State, stopping first in Macoupin county. Mr. Kelly was exceedingly fond of the chase, and in prospecting for good hunting grounds, wandered in between two ravines, a couple of miles apart, running in a northwesterly direction, and emptying into Spring creek, a tributary of the Sangamon river.

“The deer with which this country abounded before the advent of civilization, made their homes in the timber along the larger water courses. In the morning they would leave the heavy timber, follow up the ravines, along which the trees became smaller, and finally ran out on the open prairie, They would pass the day amid the tall and luxuriant grass, roaming about and grazing at pleasure, and as nightfall approached, return down the ravines, to the places they had left in the morning, each to seek its lair for repose. The deer in passing down these ravines, gave Mr. Kelly an opportunity for the full gratification of his ambition for game.

“It seemed to him so much like a hunter’s paradise, that he returned to his old home and induced his father, Henry Kelly, and his four brothers, John, older than himself, and Elijah, William and George, younger, to emigrate with him, those who had families bringing them. He induced other families among his acquaintances to emigrate also.

“More families continued to move into the country, and generally settled at long distances from each other, but the principal settlement clustered around the Kellys. When the commissioners came to locate the county seat, it was discovered that the Kelley settlement was the only place in all the county, large as it was, where enough families could be found in the vicinity of each other to board and lodge the members of the court and those who would be likely to attend its sessions.”