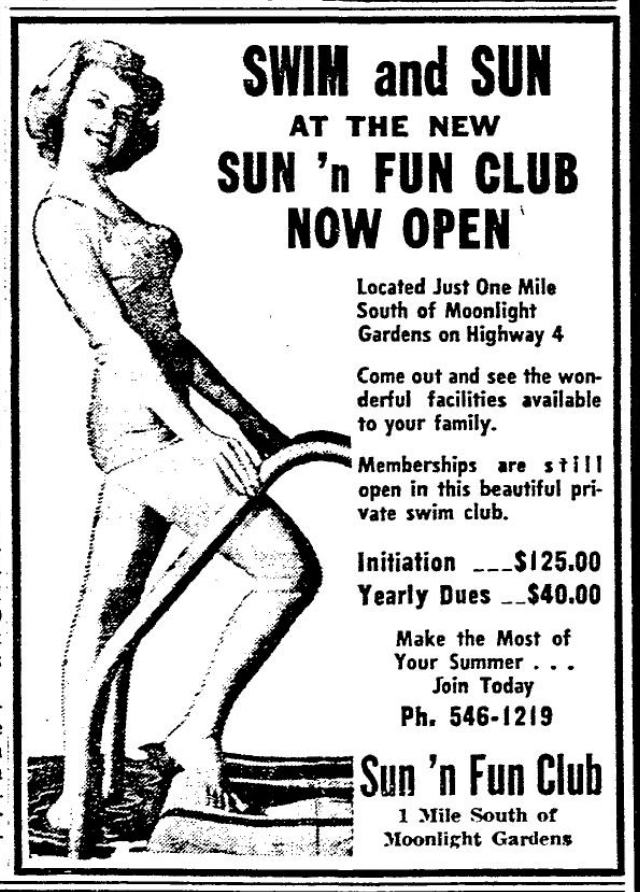 There was a time after World War II when swimming pools in the U.S. were built not just for recreation, but as investment opportunities. The Sun ‘n Fun Swimming Club was one such place in Springfield.

Sun ‘n Fun opened in the summer of 1962 on farmland along Illinois 4 (Chatham Road) that formerly had been part of the old Southwest Airport. The club’s financial backers included trucking company owner William “Billie” Cox, Walter Wagner, manager of the Springfield Association of Commerce and Industry, Springfield Mayor Lester Collins, and others.

Cox, who headed the development group, had a variety of business and political interests. He served as a Springfield Airport Authority commissioner, at one point owned the Lake Springfield Tavern, and ran for state senator in 1966, state representative in 1968 and U.S. representative in 1970. Cox, who styled himself a “maverick” Democrat, lost all three races.

The Sun ‘n Fun investment group hoped to build fee-based swimming complexes in Springfield and then take the plan nationwide.  In addition to the Chatham Road club, the group also built a pool on Ely Street in northeast Springfield.

Sun ‘n Fun was organized as a nonprofit entity, and construction of the Chatham Road club began in the winter of 1961. Originally, developers hoped to take advantage of a proposed Springfield Park District bond issue to build additional swimming facilities. District voters rejected the bond plan in April 1962, but the Sun ‘n Fun investment continued.

The Chatham Road Sun ‘n Fun was outfitted with a kid’s wading pool, a mid-sized training pool, and a diving pool.  Construction of the initial pool came in at a reported $88,000 – about $1.1 million in 2022 dollars.  Memberships were $40 a year with a $125 initiation fee. 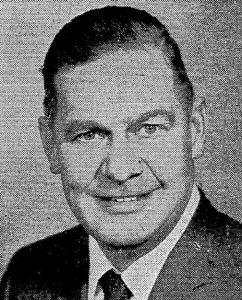 Long-time city swimming coach (and former alderman) Irv Smith commented that Cox was “a good guy” but that he had financial trouble when it came to running the club. When Cox put the Chatham Road Sun ‘n Fun up for sale in 1971, “we had a group buy it, and I was part of that group,” Smith said. Smith and the new owners renamed the complex the Olympic Club.

“A big reason we bought the Chatham Road property was so it could sit next to the Racquet Club,” Smith added.  The Racquet Club, a tennis center, was built shortly after the Olympic Club opened, and the combination of swimming and tennis in one location proved very popular, Smith said.

In addition, the Westchester subdivision was under development just to the north, which helped attract members to the Olympic Club.

A teacher by trade, Smith had coached swimming at Illini Country Club and at Springfield’s YMCA and YWCA.  He also developed and coached a winning swim team at Colony West subdivision before being instrumental in building the Olympic Club team. (Despite its name, the Olympic Club did not have an Olympics-sized pool. The pool’s L-shaped configuration was “25 yards in both directions,” Smith said.)

Smith later also bought the northend Sun N’ Fun; it had a 50-meter pool, at the time the largest in the city. Smith ran the two pools jointly for a while, but the double operation wasn’t profitable.

Smith sold the Olympic Club in the mid-1980s to what was then the Racquet Club and Fitness Center, but the swimming operation didn’t last.

“It’s hard to maintain swimming pools and have a continual group of club members, and to manage it all,” Smith said. “Since the racquet club did not preserve the swim team, they got limited clientele using the pools.”  The Olympic Club building and pools stood unused and vacant, lounge chairs stacked inside the club’s old entrance, in summer 2022.

The park district bought the Ely Street pool in 1997 and renamed it Veterans Memorial Pool. However, it also was closed in summer 2022 – “temporarily,” the park district web site said, “due to mechanical issues.”

Billie Cox (1924-2005) moved to Port Richey, Fla., where his political fortunes improved, at least for a while. He was twice elected mayor of Port Richey, but faced impeachment proceedings involving alleged meddling in police affairs when he resigned in 1980.

This entry was posted in Amusements, Business, Social life, Sports and recreation. Bookmark the permalink.