The Springfield race riot of Aug. 14-15, 1908 was unique in that more whites died than blacks. “This was due no doubt to the armed blacks, defending themselves and their interests in the Levee,” reported Carole Merritt in Something So Horrible: The Springfield Race Riot of 1908, a catalog that accompanied a 2008 exhibit of the same name at the Abraham Lincoln Presidential Library and Museum. (“The Levee” was the city’s red-light district just east of downtown. Many bars and other businesses in the area were operated by blacks.)

Seven people are generally said to have died in the rioting, but at least four other deaths before and after the violence also can be said to have been riot-related; those are included in this list.

The incident was one of two that helped inspire a white mob to carry out the Springfield race riot of Aug. 14-15, 1908.

An all-white jury later convicted James of the crime, largely on circumstantial evidence, and he was executed on Oct. 23. 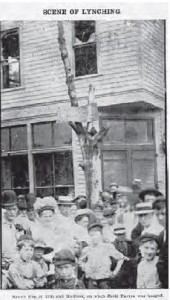 Burton had operated a barbershop at Ninth and Jefferson streets that catered to whites. On the night of Aug. 14, Burton, armed with a shotgun, attempted to defend his home at 322 N. 12th St. from the rampaging white mob. However, the rioters dragged him from the house and beat, shot and stabbed him before his dead body was hung from a tree at 12th and Madison streets. There, members of the mob continued to riddle the body with bullets.

A photo of the tree, surrounded by a white crowd and hacked up for souvenirs, is one of the iconic images of the riot.

John Colwell, a white coal miner, was shot and trampled during the Springfield race riot on Aug. 14, 1908. Colwell, 42, who had been injured when a white mob invaded the largely black “Levee” district east of downtown Springfield, died Aug. 15 at St. John’s Hospital.

He is buried in Oak Ridge Cemetery.

Delmore is believed to have been an active participant in the riot, based on a statement he reportedly made to a doctor who was treating him: “I had the satisfaction of seeing one n—– shot and if I live to get out with the bunch I will see some hung.”

Delmore is buried in Calvary Cemetery. 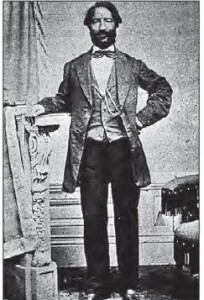 William Donnegan, an elderly black man who was lynched on the second night, Aug. 15, 1908, of the Springfield race riot, had been a prominent member of Springfield’s African American community since before the Civil War.

According to an Aug. 21, 1908, story in the weekly version of the Illinois State Register, Donnegan (spelled “Donnigan” by the newspaper) “was beaten almost to insensibility; his throat was slashed from ear with a razor and a small clothes line rope was tied about his neck, then he was hanged to the limb of a small tree” across from Donnegan’s home at Spring and Edwards streets.

The attack was broken up by police and state militia, but Donnegan died the next day at St. John’s Hospital.

The paper said the gang that attacked Donnegan’s home amounted to about a dozen men, apparently led by Abraham Raymer, a 20-year-old restaurant worker and peddler who had immigrated from Russia. (Raymer later was tried three times for Donnegan’s murder and other serious crimes, but ultimately was convicted only of stealing a sword.)

Donnegan owned an estimated $15,000 worth of property at his death, a substantial amount for the time. Although he had been a cobbler and real estate investor, Donnegan also had made a pre-Civil War trade of importing slaves from the South and hiring them out as laborers in free-state Illinois. Whites resented his wealth and the fact that his third wife, Sarah Rudolph Donnegan, was white, the Register suggested.

Donnegan’s age at his death is open to question. Most accounts say he was either 76 or 84, but the Register’s reporter, who interviewed Donnegan’s family, gave an exact date for Donnegan’s birthday: March 16, 1828, making him 80 years old when he was killed. He is buried at Oak Ridge Cemetery.

Lewis Hanen, a white railroad worker, was shot in the groin, shoulder and chin as a white mob attacked black businesses in the “Levee” district east of downtown during the Springfield race riot on Aug. 14, 1908.

He died while undergoing lung surgery in December in Chicago.

Kate Howard (1866-1908), a rooming house operator who allegedly goaded white mobs to arson and lynching during the Springfield race riot, took poison and died while  being arrested 10 days after the riots.

Howard, called by sympathetic whites “the Springfield Joan of Arc” because of her riot activity, had admitted being in the crowd at Loper’s Restaurant, 223 S. Fifth St., when a mob destroyed the building.

“What the hell are you fellows afraid of?” witnesses reported Howard saying. “Come on and I will show you how to do it. Women want protection and this seems to be the only way to get it.”

Howard was released on bond in the Loper’s case, but was rearrested Aug. 26 on charges that she had helped lynch barber Scott Burton. Before being taken to jail, she asked to be allowed to use the bathroom. There, she apparently swallowed the poison — possibly cyanide or strychnine. She collapsed and died as she entered the county jail. 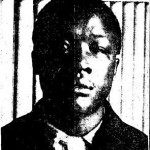 Joe James (??-1908) was a black man convicted of attacking and killing a mining engineer, Clergy Ballard, in Ballard’s home early July 5, 1908. The attack was one of two incidents that helped inspire the Springfield race riot of Aug. 14-15, 1908.

An all-white jury in Springfield later convicted James of Ballard’s murder, largely on circumstantial evidence. Despite his mother’s statement that James had been born in 1890, making him too young for execution, he was sentenced to death. (James himself estimated during his  trial he was 19 or 20, and police testified that he had told them he was 22 or 23.)

James was hanged in the Sangamon County Jail on Oct. 23, 1908. More than 7,000 people viewed James’ body at the funeral home – something local newspapers later called “morbid” and a “shocking spectacle” – after which the body was transferred to Birmingham, Ala., his mother’s home, for burial.

A co-worker at the Desnoyers Shoe Factory, Roy Wilson, claimed in coroner’s testimony that he and Johnston were onlookers when a white mob attacked Harry Loper’s restaurant on North Fifth Street the evening of Aug. 14. The two were swept by the mob into Loper’s basement, Wilson said, and two shots were fired from the restaurant barroom. One apparently struck Johnston, whose body was found in the ruins of the building.

Johnston is buried in the Mechanicsburg Cemetery.

The youngest victim of the riot was the three-week-old daughter of Mr. and Mrs. Lawrence Payne.

The child – whose name was  not reported in contemporary newspaper articles – died “as the result of the terrible heat of the flight” at Pittsfield, where her family had fled to escape the rioting.

Thomas Jefferson Scott, 72, a real estate agent, was shot as a white mob attacked black businesses in the “Levee” district east of downtown during the Springfield race riot on Aug. 14, 1908. He died on Aug. 17.