Even the most necessary tasks were a struggle for the first European residents of Sangamon County. Take baking bread, for instance, as described in the History of the Early Settlers of Sangamon County (1876) by John Carroll Power (1819-94); the book’s title page adds that J.C. Power was “assisted by his wife,” Sarah Harris Power (1824-91). 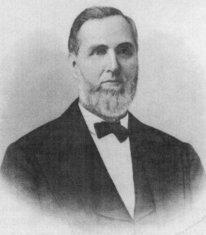 Before mills were built here, the settlers had to go to Edwardsville for grinding; but sixty or seventy miles was too far to take a grist (a “grist” was a load of corn or wheat – ed.) every day, and it was necessary that something should be more readily obtained. A piece of tin that can now be had anywhere for a few cents was then an object of great interest. Every old tin vessel was saved, torn in pieces, cut to a suitable size, punched full of holes, and nailed to a board for a grater. While the corn was soft, meal could be grated in a very short time, sufficient to make bread for a whole family, by rubbing an ear of corn back and forth on the grater. That implement is always pronounced by the old settlers “gritter.”

Mr. William Drennan (1797-1876) remembers that the first mill in Sangamon county was built by Daniel Liles on the farm where Daniel G. Jones (1822-99) now resides, near Horse creek, and on the line between Ball and Cotton Hill townships. It was erected in the fall of 1819, and was made on the plan known as a band mill. That was a horizontal wheel, with arms fifteen feet or more in length, and of sufficient height for the horses to pass under the arms. Several holes would be bored near the outer end of these arms. One wooden pin was placed in each one of the arms. A band of rawhide stretched around those pins and the trunnel head would communicate the power to the burrs, which were usually made of any loose stone picked up on the prairies. A mill of that kind would grind eight or ten bushels a day.

Liles’ mill never had any roof, and when it rained the track became very muddy. If his customers complained, he would assume an air of injured innocence and ask if they expected him to work in the rain. If they said no, but that he should do it when the weather was fair, his invariable reply was that they did not need it then.

The people came to this mill thirty or forty miles, and although it was kept running day and night, sometimes they would have to wait several days for a turn at the mill. One man told me that when he was a boy his parents started him to the mill, supplied with an extra quantity of feed for his horses and some meat for himself, with the understanding that he was to parch corn (see below) as a substitute for bread. He had to wait so long for his turn that when it came he had nothing to grind, himself and horses having consumed all the corn, and he would have been compelled to lose his turn, but the miller kindly loaned him a grist, which he repaid the next time he went to mill.

The earliest mills were only intended for grinding corn, and at first no effort was made for bolting flour, but those who raised the first wheat would cut it with the old fashioned reap hooks, called sickles, thresh it on the ground with a flail, separate the chaff and wheat by a man taking a measure of wheat, standing on an elevated place, and pouring it out slowly, with a shaking motion, while two others stood below with a common bed sheet, folded double, and taking hold of each end and giving it a quick motion toward the falling wheat, would thus blow the chaff away, while the wheat, being heavier, would fall perpendicular. The wheat thus cleaned would be taken to the corn mill and ground, of course very imperfectly.

The next point was to separate the bran from the flour. At first this was done by making a light frame, three or four feet long, and one and a half by two feet wide, and stretching a piece of the thinnest cloth and the frame shaken from right to left, after the manner of a sieve or meal sifter, and the finest part of the wheat meal would go through. That was made into bread, usually biscuit. That implement was called a search, usually pronounced “sarch.” Some of the eariest settlers will tell you that the sweetest morsel they ever tasted in their whole lives was the first piece of wheat bread thus made, after having been a whole year, and sometimes longer, living on the coarsest of corn bread.

Parched corn is kernels of dried sweet corn or field corn (not popcorn) cooked until they soften and crack open, making them edible for humans. Parched corn provides a lot of energy in a compact, lightweight form.