Joseph McCoy and the McCoy brothers 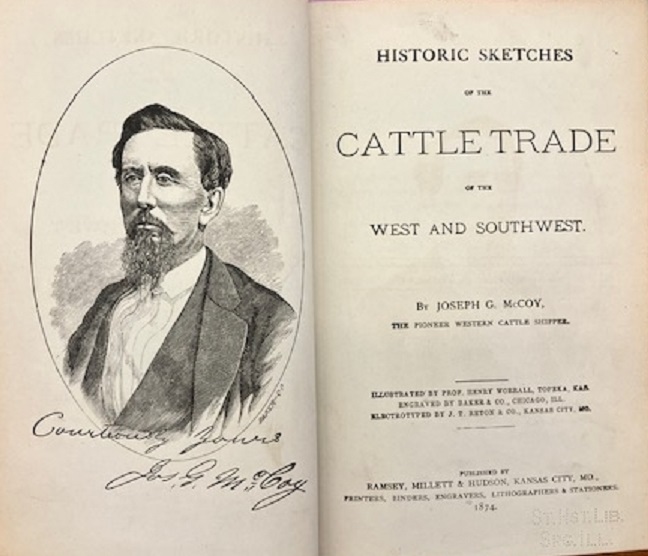 The title pages of Historic Sketches of the Cattle Trade of the West and Southwest, signed by the author, Joseph G. McCoy. This copy is in the possession of the Abraham Lincoln Presidential Library.

Joseph, William and James McCoy, in a sense, created the Wild West.

The McCoys, three brothers from Cartwright Township, organized the original cattle drives and turned Abilene, Kansas, into the West’s first great cow town. A giant segment of American culture – the mystique of the cowboy, gunfights, Western movies and “Home on the Range” – might have been much different if it wasn’t for these three sons of Sangamon County pioneers.

Their parents, David (1790-1868) and Mary (1800-48) McCoy, immigrated to Sangamon County in 1819, eventually settling in Cartwright Township (the Pleasant Plains area). David and Mary had 11 children, nine of whom survived to adulthood.

The youngest, Joseph Geitling McCoy (1837-1915), is the best known – he usually is given total credit for coming up with the idea of driving longhorn cattle from Texas to the railhead at Abilene. That’s probably because Joseph wrote colorfully about his days in Abilene in his 1874 book, Historic Sketches of the Cattle Trade of the West and Southwest. Joseph, however, didn’t work alone.

As a young man, Joseph joined his older siblings William (1829-98) and James (1832-86) in a Springfield-based livestock trading business, William K. McCoy and Brothers. Shortly thereafter, Joseph took the lead in the brothers’ foray into trading wild Texas cattle. Findagrave.com’s article on William McCoy (which is based largely on Joseph McCoy’s memoir) gives a brief, clear description of the brothers and their cattle-drive brainstorm.

The McCoys were known for the entrepreneurial spirit. It was said they “were of that sanguine, impetuous, speculative temperament; just such dispositions as always look most upon the bright side of the picture and never feel inclined to look at the dangers or hazards of a venture, but take it for granted that all will end well that looks well in the beginning.”

During the Civil War, while many Texans were away fighting for the Confederacy, the cattle multiplied, so that by 1866 they were only worth four dollars a head in Texas. Being of so little value the cattle were running wild, and with cessation of hostilities it became an enormous task to round up the many thousands adrift in the scrub and brush country of the Texas plains. William McCoy and Brothers were rounding up the cattle and Joseph set out to find a suitable shipping point east.

Joseph McCoy lighted on Abilene as the best site for the firm’s cattle pens. It wasn’t much of a town, McCoy wrote in Historic Sketches.

Abilene in 1867 was a very small, dead place, consisting of about one dozen log huts, low, small rude affairs, four-fifths of which were covered with dirt for roofing; indeed, but one shingle roof could be seen in the whole city. The business of the burg was conducted in two small rooms, mere log huts, and of course the inevitable saloon, also in a log hut, was to be found. 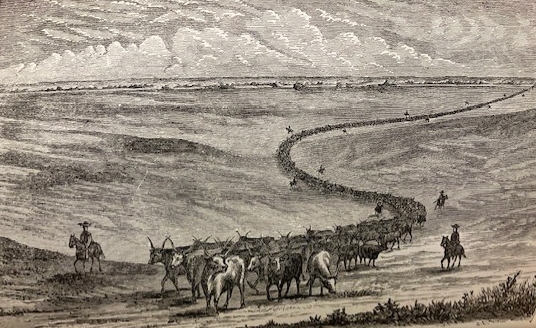 Joseph had lumber hauled in and a pen built to hold 1,000 head of cattle. He also constructed a hotel (the Drover’s Cottage) and a bank, office and livery stable. Findagrave continues.

Agents were sent south to acquaint Texas cowmen with the plan to receive the fall drives.

After several years of tremendous profits, the bubble burst for a variety of reasons. By 1871 the firm of William McCoy and Brothers left Abilene.

One of the big causes of the burst bubble was a brutal winter that killed off thousands of cattle. The McCoy brothers also struggled with quarantines aimed at quelling “Texas fever,” a disease to which Texas longhorns were immune, but other breeds were not (of course, the quarantines also helped protect Midwestern beef producers from cheaper western competition).

Historic Sketches, however, blames a cabal of municipal officials for bringing about the end of Abilene’s cattle boom. Joseph McCoy spends a considerable part of the book settling scores with them and others who impeded the McCoys’ businesses. 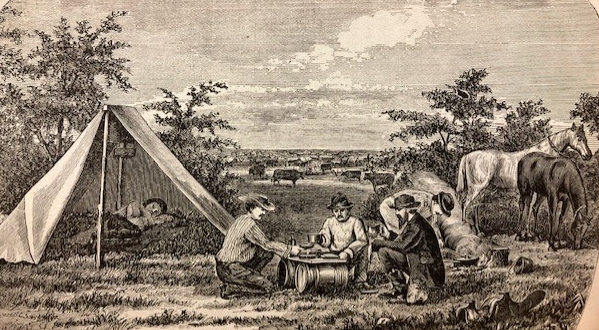 But the best parts of Historic Sketches are Joseph McCoy’s descriptions of ranchers, cowboys, their lives, and cattle towns in the late 1860s and early ‘70s, the period when the Old West was new. Here is part of McCoy’s description of the “cow-boy”.

If any one imagines that the life of a ranchman or cow-boy is one of ease and luxury, or his diet a feast of fat things, a brief trial will dispel the illusion, as is mist by the sunshine. True his life is one of more or less excitement and adventure, and much of it is spent in the saddle, yet it is a hard life and his daily fare will never give you the gout. …

They do their own cooking in the rudest and fewest possible vessels, often not having a single plate or knife and fork other than their pocket knife, but gather around the camp kettle in true Indian style, and with a piece of bread in one hand proceed to fish up a piece of “sow belly” and dine sumptuously, not forgetting to stow away one or more quarts of the strongest coffee imaginable, without sugar or cream, indeed you would hesitate, if judging from appearance, whether to call it coffee or ink. …

The life of the cow boy is one of considerable daily danger and excitement. It is hard and full of exposure, but is wild and free, and the young man who has long been a cow boy has but little taste for any other occupation. He lives hard, works hard, has but few comforts and fewer necessities. He has but little, if any, taste for reading.

He enjoys a coarse practical joke or a smutty story; loves danger but abhors labor of the common kind; never tires riding, never wants to walk, no matter how short the distance he desires to go. He would rather fight with pistols than pray; loves tobacco, liquor and women better than any other trinity. … He enjoys his pipe, and relishes a practical joke on his comrades, or a corrupt tale, wherein abounds much vulgarity and animal propensity. His clothes are coarse and substantial, few in number and often of the gaudy pattern. The “sombrero” hat and large spurs are inevitable accompaniments. … The most rude and primitive modes of life seem to be satisfactory to the cow boy.

Joseph McCoy served a term as mayor of Abilene, during which he reportedly hired Wild Bill Hickok as town marshal. After the cattle business, he promoted refrigerated rail cars and worked at jobs including U.S. Census agent and revenue agent for the Cherokee Nation.

McCoy eventually settled in Wichita, where he invested in real estate. He is buried there. McCoy was inducted into the Texas Trail of Fame in 2011.

Hat tip: To Illinois Heritage magazine, a periodical of the Illinois State Historical Society, for reminding SangamonLink of the remarkable career of Joseph G. McCoy.

This entry was posted in Agriculture, Business, Prominent figures. Bookmark the permalink.

1 Response to Joseph McCoy and the McCoy brothers