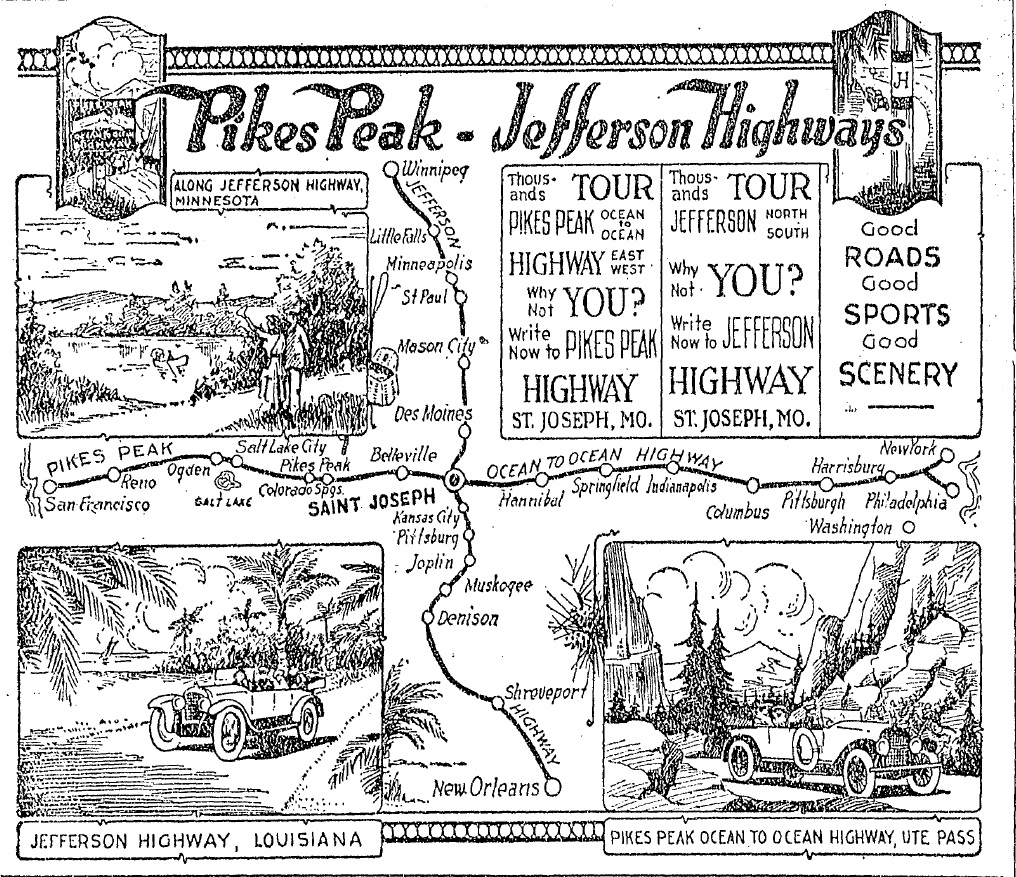 Back when Illinois highways had names, not numbers, the Pike’s Peak Trail brought tourists, and their dollars, to central Illinois.

The trail (full name “Pike’s Peak Ocean to Ocean Trail,” often abbreviated PP-OO or PPOO) was cobbled together from bits of roadway connecting New York City to Colorado, then on to California, starting in 1914.

“Trail” probably described the route better than the word “highway” anyway. Roads were often unpaved, rivers sometimes unbridged (Pike’s Peak Trail travelers had to take a ferry to cross the Illinois River at Valley City) and amenities unlikely. A cross-country automobile tour was an adventure, not a vacation.

Shorter trips weren’t much better, as the Illinois State Journal noted in March 1921.

Motorists, both local and those from surrounding territory, have been fighting mud during the last week. The sunshine of Thursday and Friday resulted in passable but rough highways, and the use of the road drag this week will whip them into good shape, if the weather is fair.

The hardest problem presented to the (Springfield) auto club last week was the establishment of a passable route to Decatur. The Sangamon River levee and the Ocean to Ocean road near Clear Lake were the scenes of distressed motorists, who were stuck in the deep ruts.

The Pike’s Peak Ocean to Ocean Trail was one of a half-dozen “trails” and “ways” that intersected in Springfield in the late 1910s and ‘20s. Others (some of which also went by more than one name or which changed names from place to place) included the Alton and Burlington Ways (both followed railroad lines for at least part of the routes); the Logan-Lee Trail (Metropolis to points north); the Waubaunsie Trail (Quincy to Decatur); and the ungainly named East St. Louis-Springfield-Chicago Trail. The Cross State Trail covered some of the same roads as the Pike’s Peak Trail, entering Sangamon County at Illiopolis and leaving it on the west at Ashland. 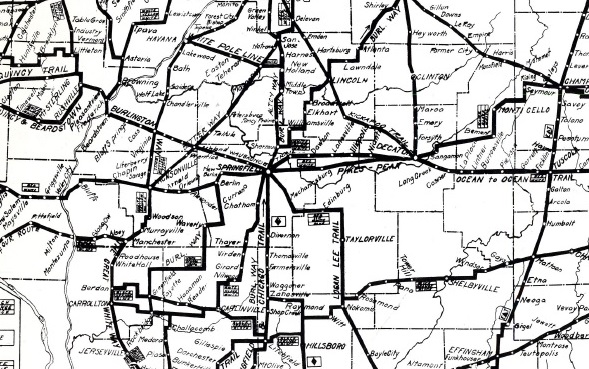 “Trails’ and “ways” came through Sangamon County from every direction. (Illinois Department of Transportation)

The routes were marked by primitive road signs. Signs along the Pike’s Peak Ocean to Ocean Trail were red on top and white on the bottom, sometimes also including the PP-OO abbreviation. The Black Diamond Trail, which went through Illinois coal country from Murphysboro through Hillsboro to Springfield, was marked, naturally, by signs carrying a diamond-shaped black symbol on a white background. (All sorts of symbols were used around the state. The Swastika Trail – a name chosen well before that symbol was adopted by Adolf Hitler’s political movement – ran from Wapello, Iowa to Galva in northwestern Illinois.)

The Pike’s Peak Trail, however, had something the others lacked: marketing.

Sangamon County joined the planning effort in July 1914, when trail advocates wrote Sangamon County Highway Commissioner Edward White that a group of enthusiasts would be driving through Springfield on a publicity tour from Terre Haute, Ind. to Colorado Springs.

“Let us join together in one big effort to show the world that the Pike’s Peak Ocean to Ocean highway is the most practicable and the most attractive transcontinental route that is open for traffic today,” wrote A.W. Henderson of Colorado Springs. (Henderson was one of the trail’s original organizers, along with other businessmen and public officials from smaller towns in Colorado, Kansas and Missouri.

A few days later, the Illinois State Register published a two-thirds page layout, with five illustrations showing scenic spots on the trail (“Like a bit of Swiss scenery,” one caption said), that almost surely was provided by the PP-OO trail’s promoters.

It took Springfield until 1921 to formally join the PP-OO association. The Springfield Commercial Association, the trail’s main local backer during the entire period, signed up more than 300 charter members at $7 a head. 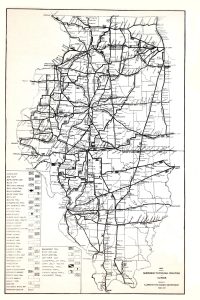 Springfield, however, was always a mainstay of the trail.  When Illinois issued its first road map in 1917, the city was clearly marked as being along the PP-OO.

Joining the association did make it possible for Springfield to host the association’s national convention, which the city did in February 1922. Keynote speaker was Gen. John J. Pershing, commander-in-chief of the American Expeditionary Forces during World War I.

Pershing had been in town anyway, along with then-Vice President Calvin Coolidge, as part of Abraham Lincoln’s birthday ceremonies, but he already had connections to the PP-OO. For starters, the road ran directly in front of his boyhood home in Laclede, Mo. And in 1918, trail backers, arguing the PP-OO could be the backbone of U.S. military infrastructure, co-designated the Pike’s Peak Trail as the “Pershing Transport Route.”

“There is no doubt that a great part of our success in bringing the war to a successful conclusion was the excellent roads we found and our system of keeping them repaired,” Pershing told the convention. “I am strong for good roads.”

During its relatively brief existence, the PP-OO relied primarily on local governments, cities and counties along the trail, to pave roads or, where portions still had dirt or gravel surfaces, at least maintain the route. As state authorities began to take over road construction and upkeep, however, the need faded for efforts like that of the Pike’s Peak Ocean to Ocean Trail Association.

The trail’s name disappeared starting in 1926, when the federal government instituted a numbering system for highways. Today, U.S. 36 generally follows the old trail’s path through much of the Midwest.

Several web sites cover the history of the Pike’s Peak Ocean to Ocean Trail. As of fall 2021, Alan Ferguson’s us36guidebook.com probably provided the fullest historic presentation.  But what amounts to an obituary for the PP-OO was on another site, ppoo.org.

Begun by roads boosters who arranged with cities and towns along the route to participate in this form of civic advertising, the route was probably determined more by which towns would offer money and road improvement than any logical routing design.

Competing with its more famous cousins the Lincoln Highway and the National Old Trails Road well before the national numbered routes existed, the PP-OO, as its markers labeled it, has fallen into obscurity, virtually unknown even to residents of the cities and towns along the old route.

Why? One look at the municipalities it visited tells part of the story; if you had to design a cross-country road which avoided any major city, it would be hard to do better than the PP-OO. After leaving NYC, the biggest city it hit in the northeast was Harrisburg, PA. Studiously avoiding Columbus and Indianapolis, the route wound through one small town after another in the midwest, with Springfield, IL its major stop.

On the other hand, such relative obscurity has left the old route more pristine than its former competitors. …

Re-tracing the old Ocean to Ocean road, one travels through the countryside, towns less impacted by urban and commercial sprawl, and comfortable smaller cities. It is not so hard to imagine what travel might have been like in the teens and twenties, following a narrow, roller-coaster road through north central Missouri, a winding mountain road in eastern Pennsylvania, an arrow-straight two-lane through the cornfields of central Illinois, or an abandoned gravel segment in western Kansas.

The road takes you through the forested hills of the northeast, the agricultural heartland, the back country mountain and desert west. Some of the best of America.

More information: The Illinois Department of Transportation has images of state road maps from 1917 through the present.

This entry was posted in Business, Maps, Transportation, Uncategorized. Bookmark the permalink.