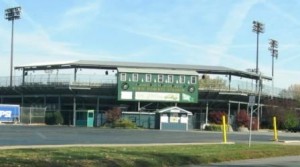 Robin Roberts Stadium, then named Reservoir Park, opened on May 12, 1925. About 12,000 people watched a Three-I League baseball game between the Springfield Senators and the Terre Haute Hottentots.

The Senators remained a Three-I team until 1949, then switched for a single season to the Mississippi Valley League. The Senators went out of business in 1951, and the city had no professional baseball until the 1970s.

In 1976, the park was renamed in honor of baseball Hall of Fame pitcher Robin Roberts, a graduate of Lanphier High School, and in 1978, the AAA-level Springfield Redbirds began play in Springfield.

After the Redbirds moved to Louisville, Ky., following the 1981 season, the Class A Springfield Cardinals became the city’s home team through 1993. The Springfield Sultans played two seasons in the park, followed by the Frontier League Capitals for six years. No professional baseball was played in the city for the next six seasons, until the Springfield Sliders were formed in 2008.

The Sliders remained Robin Roberts Stadium’s professional home team as of 2014. Benedictine University at Springfield also plays at the field.

Recent improvements include a resurfaced playing field (2008) and an electronic scoreboard (2011), but the State Journal-Register in 2010 said the park was showing its age. “Robin Roberts Stadium at Lanphier Park (the ballpark’s formal name) is more relic than treasure,” sports editor Jim Ruppert wrote.

This entry was posted in Buildings, Sports and recreation and tagged baseball. Bookmark the permalink.