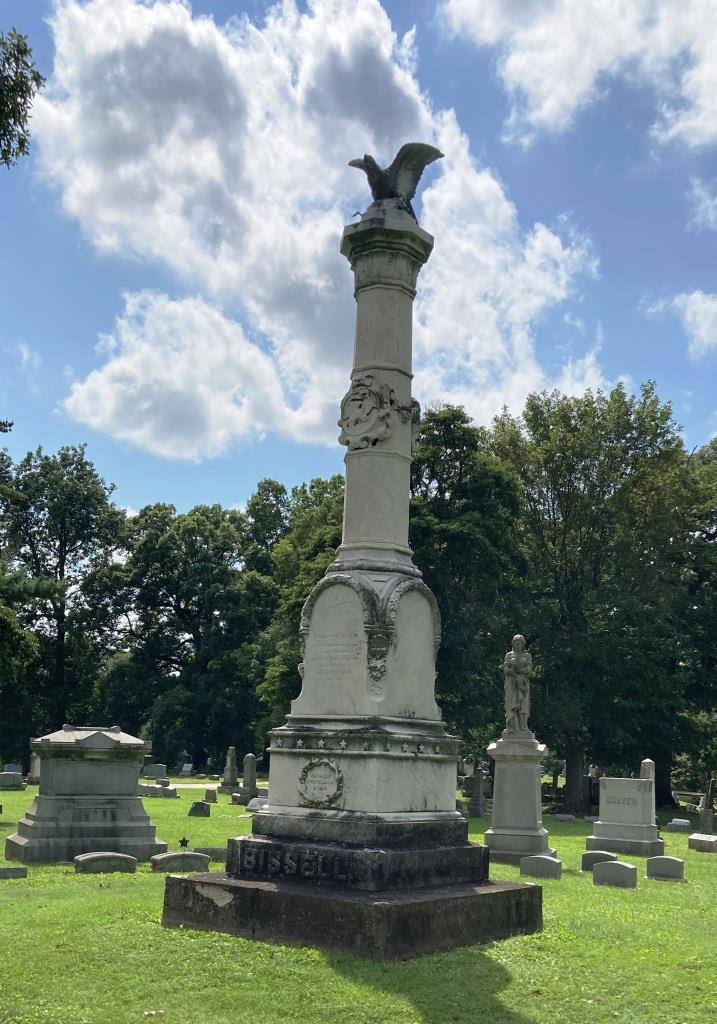 When Gov. William Bissell was reburied in 1871, the crowd may have been bigger than at any Springfield funeral since that of Abraham Lincoln.

Bissell was the first Republican, first college graduate and first disabled person elected governor. He also was the first to die in office.

Bissell rose to political fame due to his service in the Mexican War and due to the fact that, while in Congress in 1850, he accepted a challenge from Jefferson Davis, later the president of the Confederacy, to fight a duel.

Bissell (1811-60), born in New York state, actually had two college degrees, one in medicine and a second in law. Robert Howard wrote about Bissell’s conversion to politics in Mostly Good and Competent Men: Illinois Governors from 1818 to 1988 (1988):

After coming to Illinois from upstate New York, he quit medicine for the law and politics when he discovered that he had rare talent as an extemporaneous speaker. One contemporary described his style and diction as “elegant” and his use of satire as “cutting and effective.” 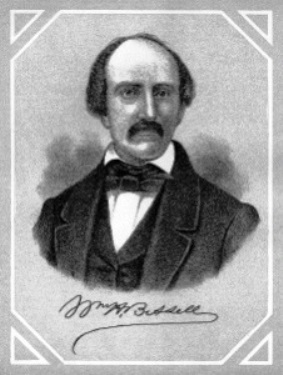 “In stature he was somewhat tall and slender, and with a straight, military bearing, he presented a distinguished appearance. His complexion was dark, his head well poised, though not large, his address pleasant and manner winning.” Portrait and Biographical Album of Champaign County, Illinois (1887)

Bissell had already served in the Illinois House (where he met Abraham Lincoln, who would be an important connection for Bissell later) when the Mexican War began in 1846. Bissell recruited a company of volunteers from Belleville, who elected him captain.

Bissell was colonel of a full regiment, the 2nd Illinois Volunteers, at the Battle of Buena Vista in 1847.

“While under fire his regiment executed a parade ground maneuver that allowed them to change front and help turn back the Mexican army,” Howard wrote. “On his return to Belleville, he was welcomed as a hero and rewarded with election to Congress in 1848 for the first of three terms.”

While in Mexico, however, Bissell contracted a disease that eventually cost him the use of his legs. Although never publicly diagnosed during his lifetime, it apparently was syphilis. Bissell even acknowledged that to a friend, according to Howard:

The ailment, which he described as rheumatic or neuralgic, was diagnosed as syphilis by Dr. John F. Snyder, a personal friend who was both a doctor and a historian. “He died of the secondary effects of syphilis – he told me so himself – he contracted in Mexico.”

Bissell, however, was still physically active in 1850, when he got in a wrangle with southern congressmen over the relative roles of Northern regiments versus Southern ones during the Battle of Buena Vista. Wikipedia describes the controversy:

Bissell true to his anti-slavery convictions, held a very definite dislike for his Southern colleagues, whom he described collectively as “insolent, overbearing and bullying beyond all belief.” A nearly hour-long speech on the House floor, in retaliation for distortive comments made by James A. Seddon (D-VA), regarding the Battle of Buena Vista, in which Bissell fought, won approval from Bissell’s fellow Illinoisans, but inflamed Jefferson Davis, who felt personally slighted by the speech. Davis challenged Bissell to a duel, which Northern Congressmen were known to refuse. Bissell not only accepted the challenge, but in his rights as the party challenged, specified army muskets, loaded with ball and buckshot, at close range.

Davis, his bluff called, decided he was satisfied by Bissell’s explanation of the supposedly offensive comments. Davis lost face, while Bissell’s reputation got a boost.

Bissell’s paralysis got worse, forcing him to give up his Congressional seat and return to Belleville. In 1856, however, Lincoln convinced Bissell to join the fledgling Republican Party and run for governor.

Bissell by then had to use crutches to walk, so he barely campaigned. Nonetheless, he won a narrow victory in a three-way race (a Know-Nothing candidate was on the ballot along with Bissell and Democrat William Richardson).

The Illinois Constitution, however, included a clause requiring state officeholders to swear they had never fought or accepted a challenge to fight a duel. Bissell obviously had accepted Davis’ challenge, but he finessed the Illinois oath: the state constitution didn’t apply, he said, because the challenge had been issued in the District of Columbia.

Because of his paralysis, Bissell never entered the state Capitol during the entire three years he was in office. He was inaugurated in the Executive Mansion and did all the state’s business from a room on the second floor of the mansion.

Bissell’s administration was a mixed bag. The state established the first rail connection between the Mississippi River and the East Coast while he was governor, but Bissell was embarrassed when he signed a Democratic reapportionment bill that he meant to veto – he apparently thought the measure was an appropriations bill.

“Bissell then reversed his action and vetoed the bill with a message that is in Lincoln’s handwriting,” Howard wrote. “The return of the bill to the legislature was greeted by a scene of what contemporaries called ‘great confusion.’”

Bissell died of pneumonia on March 18, 1860. Lincoln was among the last visitors to his deathbed.

Bissell had converted to Catholicism in 1854 at the request of his second wife, Elizabeth Kintzing Kane (1826-65). Springfield’s Catholic pastor, Rev. W.F. Fitzgibbon, conducted Bissell’s funeral Mass at the mansion, but a Jesuit priest from St. Louis, identified only as “Rev. Smarius,” delivered the eulogy at Springfield’s old Hutchinson Cemetery. Whatever Smarius said, the Journal didn’t like it.

Were it customary to criticize performances of this nature, the Reverend gentleman’s discourse would furnish ample scope for remark. As it is, we feel constrained to say he appeared to take advantage of the occasion to thrust upon the assembly many things which the great majority of his hearers doubtless regarded as in bad taste, and decidedly inappropriate. But let this pass. 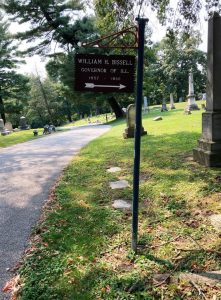 (The Diamond Jubilee History of the Springfield Catholic Diocese (1928), by contrast, reports that Smarius’ “funeral oration … was for many years referred to as a discourse of unusual eloquence and power.”)

Most people buried at Hutchinson Cemetery (which was on the site of today’s Springfield High School) eventually were reburied at Oak Ridge Cemetery. Bissell’s remains were transferred on May 31, 1871.

“The procession was one of the largest and most imposing which has been seen in this city since the obsequies of the lamented President Lincoln,” the Journal said. The Register estimated 6,000 people attended the cemetery service.

Bissell’s monument, funded by the legislature in 1867, is a 22-foot-tall monument of Italian marble, topped by an eagle, with the inscription “Patriot, Statesman and Hero.” Nothing on the site says so, but Elizabeth Bissell also is buried there.

For a time in the 1840s, William Bissell was a law partner of James Shields (1806-79), who once challenged Abraham Lincoln to a duel. (The dispute involved letters teasing Shields that were published in the Illinois State Journal.) As in the Bissell-Davis argument, that duel never took place.

But it leaves the law firm of Bissell and Shields with a grim distinction: its partners, years before the Civil War, might easily have killed the presidents of both the Union and the Confederacy.