The Who at the Illinois State Fair, 1968 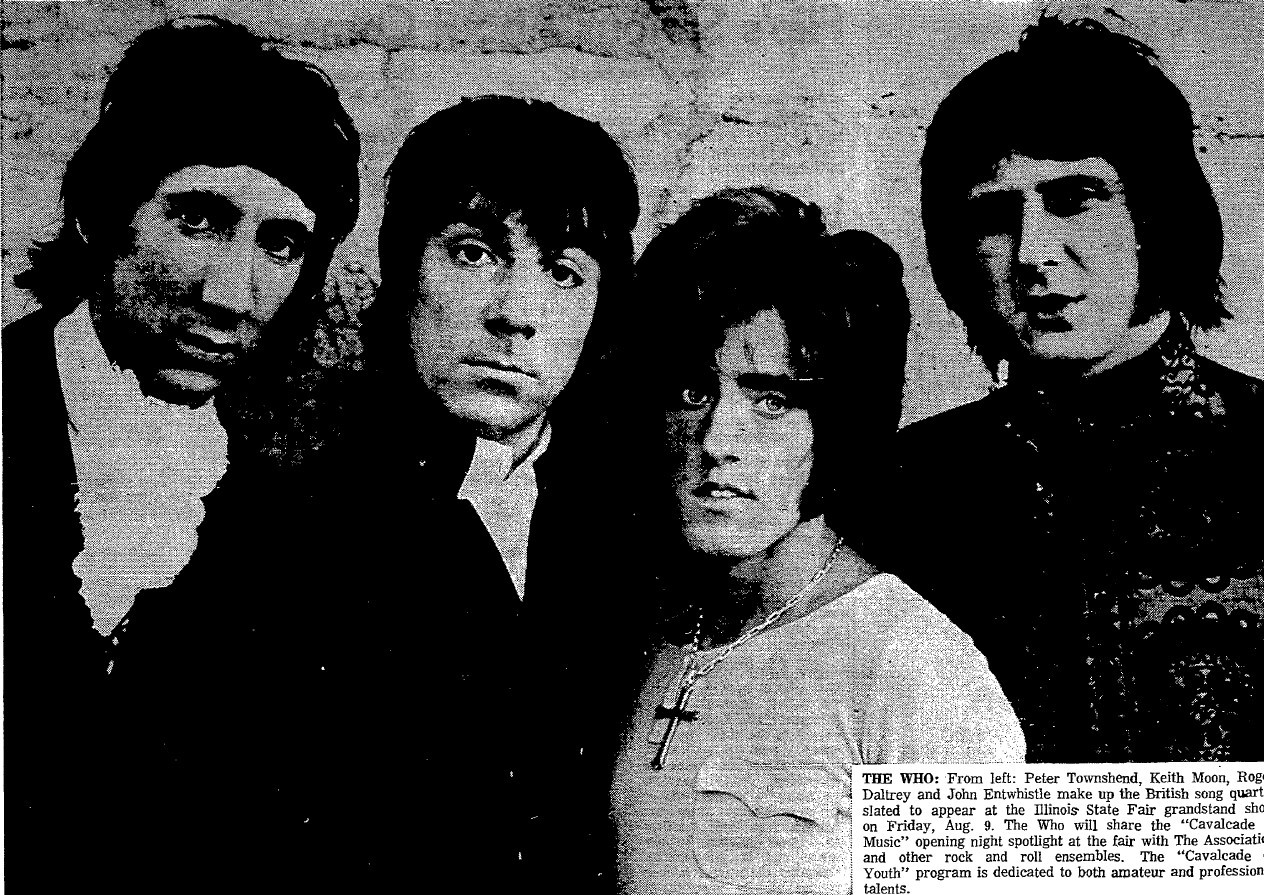 The Who in a publicity photo, July 1968 (Courtesy State Journal-Register)

The amplifiers were set to top-end at the Illinois State Fair Grandstand on the evening of Aug. 9, 1968. Performing that night were Pete Townshend, Roger Daltrey, John Entwistle and Keith Moon, better known as the Who.

From their dressing room under the Grandstand, they headed up to the large plywood stage outside. A summer wind blew freely as the group belted out hits from their latest album, “The Who Sell Out.”

The band had a single on the charts (“Magic Bus”) that summer, and they had a loyal following. But other British pop bands – the Beatles, the Rolling Stones – were better known, so the Who didn’t get top billing at the fair.

Instead, the headliner was the Association, a U.S.-based, easy-listening vocal band whose hits included “Windy,” “Cherish” and others. In August 1968, the Association had four albums to its credit while the Who had three.

The Who’s performance did get some advance coverage as early as March, and in July, an Illinois State Journal article about the upcoming show mentioned their “unusual costumes” and “’fuzz tone’ sound.” The article added that the band was known for “busting up” instruments, but that was “only when they feel compelled to do so.”

At any rate, the Aug. 9 double bill was an awkward combination. Having the Who open for the Association was like inviting a blacksmith to hammer out a horseshoe before a choir performance.

Because they were the opening act, the Who did a short set – there is no recording or review of the show, but based on other stops on the tour, the band probably performed for 30 to 45 minutes. They made up for lost time by raising hell, musically speaking.

Concluding an explosive set, the Who left the stage in tatters. Keith Moon’s custom-made “Pictures of Lily” drum set careened downstage as pieces of Pete Townshend’s electric guitar, violently smashed during their final song “My Generation,” lay scattered about. Townshend’s guitar reportedly splintered across the faces of the front-row audience as fans grabbed at its remnants.

Aug. 9 was Youth Day, as part of which the fair also held a contest (the Cavalcade of Music) in which local stage bands and baton artists competed for cash prizes and the chance to perform in front of the Grandstand crowd that night.

Other Grandstand acts during the 1968 fair included Ray Price, the Ed Ames Revue, Frankie Masters and his orchestra, Lawrence Welk, the Elkins Sisters with their “Symphony in Motion” balancing act, the Kids Next Door, and two stand-up comedians: Don Adams, star of the “Get Smart” TV show and Flip Wilson (billed as “the negro comedian”). Tractor pulls were another Grandstand favorite that year.

After their state fair show, the Who played a one-night stand in St. Charles, Ill., and then went on to play the Fillmore West in San Francisco alongside the Grateful Dead and Creedence Clearwater Revival. The Who’s U.S. tour concluded on Aug. 30 in Arizona.

9 Responses to The Who at the Illinois State Fair, 1968