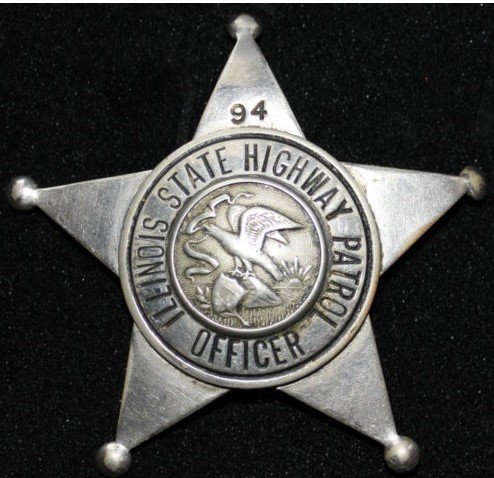 When officers of the fledgling Illinois Highway Patrol lined up in full regalia in 1923, J. Frank Nuckolls of Auburn wore one of the patrol’s brand-new badges on his chest. He had a big job ahead of him.

The highway patrol, ancestor of the Illinois State Police, had been in existence less than a year at the time – a history on the state police website dates the agency’s founding to the appointments April 1, 1922, of commander John J. Stack and eight patrol officers.  “The equipment consisted of surplus World War one motorcycles and uniforms for the eight officers,” the history says.

It isn’t clear if Nuckolls (1883-1954) was one of those first eight, but he definitely was on the force by the time the patrol assembled in Springfield on Jan. 31, 1923. The Illinois State Journal recorded the event the next day.

Seventeen highway patrol officers … assembled in the city yesterday, dolled up in their new O.D. uniforms, passed inspection before state officials and departed in search of law violators. The delegation of riders assembled in the highway department and discussed plans for activity, after which each was presented with a new outfit, including a shining star.

The patrol officers are assigned to various sections of the state. J. Frank Nuckolls of Auburn has been assigned to duty on the hard road between Carlinville and Mason City.

East to west, Nuckolls’ district ranged from Springfield to Jacksonville, and at first he was the only officer deployed to the area.

Unlike today’s state police, the original highway patrol did not have full law enforcement powers. Officers’ authority was limited to traffic offenses; in particular, they were concerned with protecting paved roads from damage by overweight trucks and farm tractors with lug wheels.

John Goveia of Springfield joined Nuckolls in the central Illinois district later in 1923. In September, the two announced a crackdown on speeders and motorists who failed to dim their headlights. The Journal quoted Nuckolls.

“Speeding will not be permitted on the roads,” Nuckolls said yesterday. “For some time we have tried to be lenient with offenders, but some of them do not heed warnings, and it has been necessary to make arrests. Many drivers do not obey the law which provides for the dimming of lights. This law also will be enforced.”

Highway patrol hiring was based on political affiliation (as was the case later for state police; merit hiring of officers didn’t begin until Gov. Adlai Stevenson forced the issue in 1949). Nuckolls, hired under Gov. Len Small, presumably was a Republican. However, he had a law enforcement background.

Nuckolls was night marshal in Auburn in August 1914, when two “yeggs,” as the Illinois State Register called them, tried to blow open the safe at the Auburn post office.

Nuckolls, attracted by the shock of the explosion, which wrecked the safe, hurried to the post office building. … where one of the men who had stationed himself on the outside of the building while his partner was at work attempting to rifle the safe. The man immediately fired on the officer. Two shots were fired. Neither struck its intended mark.

When the officer reached the place, one of the men on the inside of the building was reaching into the safe to get what money was there. The robbers left immediately after the attempt to take Nuckolls’ life was made, without getting any of the money.

As the highway patrol/highway police grew, Nuckolls rose to the rank of sergeant in a district that eventually ran from Quincy to Decatur.

He was relieved of duty, allegedly for conduct unbecoming an officer, on Jan. 14, 1933. The actual reason probably was patronage; a Democrat, Henry Horner, had taken office as governor only five days earlier.