Blazing-hot weather killed two people, one an infant, in July 1954, and Springfield recorded its highest temperature ever – either 112 or 113.8 degrees, depending on which thermometer you followed  – on July 14, 1954. 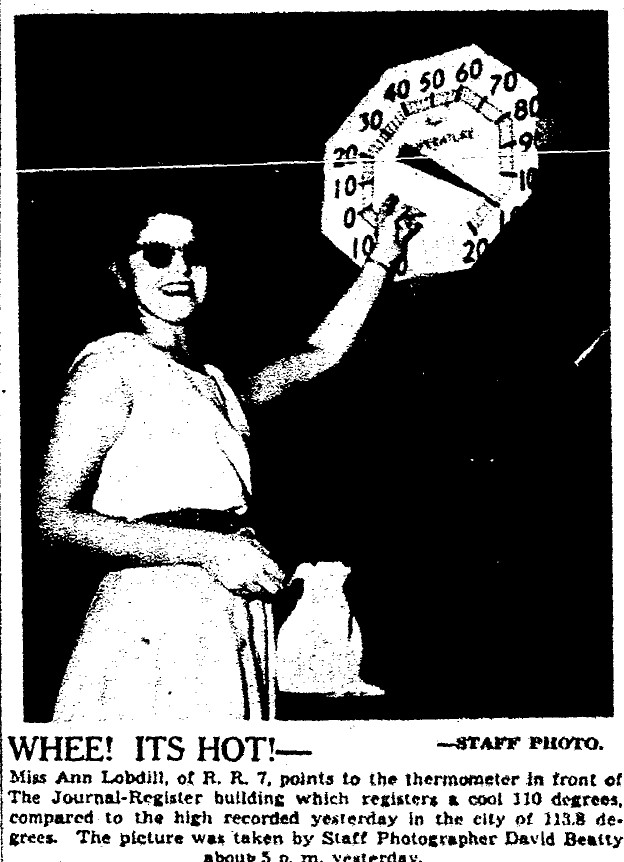 The Illinois State Journal illustrated its coverage of the record-setting temperature of July 14, 1954 with this photo (Courtesy State Journal-Register)

The heat was compounded by a three-year drought that hit its height in 1954. Before rainfall finally resumed in 1955, Lake Springfield fell almost 13 feet below full pool.

Wednesday, July 14, was the second day in a row of 100-degree temperatures in Springfield. The Illinois State Journal explained the two different temperature readings on the 14th:

Weatherman Paul F. Sutton reported a temperature reading of 113.8 degrees on a thermometer on the postoffice lawn at 3:55 p.m.

The weather station at Capital Airport recorded 112 degrees at 3:45 p.m.

The airport reading probably will go down in the official records, but in any case the old all-time record of 109.5 degrees was decisively smashed. The old mark also was set on a July 14, 1936.

The National Weather Service does indeed recognize the airport figure.

The hot weather even brought out a bit of wry humor, the Journal reported.

After the sun went down the temperature began to inch downward and thousands found relief from the heat in cool backyards, on porches or in the city’s parks.

But it was rough during the day.

“Is your office air conditioned?” was a conversation started at noontime lunch counters. Employes on some state, city or private firms that lack air conditioning were excused early because of the heat.

William B. McKenzie, vice president and treasure of the Illinois National Casualty Co., added a humorous twist. He placed a notice on the bulletin board of the firm’s air conditioned offices which read:

“Anyone wishing to do work overtime tonight may do so by paying the company time and one-half of their hourly rate.”

Luckily, July 15 saw a return to more moderate temperatures – the high, a relatively balmy 87 degrees, was hit at 2:45 p.m.

When the heat was on, however, it was deadly to two people. Lester Lee Cantrall, the eight-month-old son of Mr. and Mrs. Donald Cantrall of Clear Lake Avenue, died the morning of July 13 in his crib. Alfred Ward, about 40, a garbage collector, became ill at work July 14. He was pronounced dead several hours later at St. John’s Hospital. 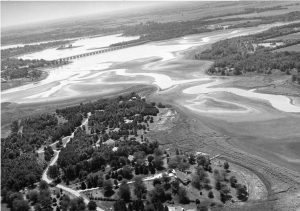 Meanwhile, Springfield city officials were working on ways to get more water into Lake Springfield, the depth of which had been dropping steadily since 1952. The lake level, just above 550 feet in July 1954, hit its lowest point, 547.63 feet, on Feb. 17, 1955. At 546 feet, engineers said, City Water, Light and Power might not be able to draw cooling water into its electric generating station at the lake.

To forestall that emergency, the city council implemented a plan to draw water from the South Fork of the Sangamon River. The lake benefited somewhat from a rebound in precipitation starting in February 1955, but it was still 10 feet low on April 14, 1955, the day Utilities Com. George Oliver pressed a button to start pumping from the South Fork.

The coldest day in recorded Springfield history was Feb. 13, 1905, when the temperature fell to 24 degrees below zero.