When William “Buck” Hinrichsen took office as Illinois secretary of state in 1893, he appointed his sister, Savillah Hinrichsen, as assistant state librarian.

The term “assistant,” however, was misleading – the secretary of state is also titularly the state librarian, but Savillah Hinrichsen (1853-1917) actually ran the library. With her brother’s firm support, she oversaw a significant expansion of the library’s collection and staff. 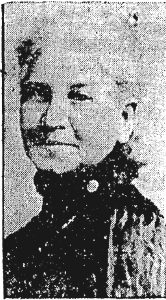 Under her administration, according to the website of the Illinois State Library Heritage Project, “The library mission began its shift from primarily serving the legislature to becoming a resource for the public.”

Savillah Hinrichsen also was one of her brother’s most influential political advisers. Buck Hinrichsen (1850-1907) ran for Congress in 1896 on a free-silver platform (“free silver” would have inflated the money supply and made it easier for farmers and other creditors to pay their debts). He won the election.

In a newspaper interview while visiting Denver, Colo., in 1895, Savillah Hinrichsen said she had been the one who convinced her brother to endorse free silver. According to the story:

She has the family love for politics and is thoroughly in touch with the situation in Illinois. In her conversation last evening, Miss Hinrichsen was not in the least guarded and said what she thought in an outspoken manner. Among other things, she said: “There is not the least doubt in the world that the rank and file of the people of Illinois are in favor of the free and unlimited coinage of silver. I believe I was the first one to talk with my brother on the subject, and mother gave him no peace until he became convinced that free silver was the issue. … The fight over a congressman in the Eighteenth district in Illinois to fill a vacancy is going to be a great struggle. The free silver issue is to cut some figure.”

Despite her knowledge of politics, Hinrichsen was unable to cast a vote herself. Probably as a result, she was a fierce suffragist. When a quirk in state law first allowed women to vote for trustees of the University of Illinois in 1908, Hinrichsen was one of only 12 Springfield women to register to do so. (The women voters were to be given special ballots, since U of I trustee was the only vote they could cast; according to the Illinois State Register, “the board was undecided last night whether they would be printed on pink or lavender tinted paper.”)

Hinrichsen, who served for a time as president of the Sangamon County Equal Suffrage Club, told the club in a 1909 speech that the biggest obstacle to votes for women was other women.

Who is the active anti-suffragist? Is she the producing woman, or does she belong to the parasite class? … I do not mean wives and mothers, or wives who are home makers, but a vast number of women who marry to be supported, seekers after ease, good clothes and excitement. The mass of these women do not want to vote, but why should they object to the placing of the ballot in the hands of thoughtful women who feel that the ballot is their due and lawful right as wage-earners and tax-payers. …

When our forefathers fought and bled rather than to submit to be taxed without representation, did they hand a blood-bought right down only to their sons? Were the daughters disinherited? We too are heirs of the glory of the conflict and of its hard-won privileges.

If the anti-suffragists do not desire a share in this heritage, let them join the army of non-voting men and shirk their political duties, as so many of them avoid all domestic duty.

Hinrichsen’s reference to the American Revolution’s slogan of “no taxation without representation” was personal – she was a charter member of the Springfield Chapter National Society of the Daughters of the American Revolution. She also was a charter member of the Authors Club – following her term as assistant state librarian, she listed her occupation on census forms as “writer” – and served on the board of the Springfield Art Association.

Hinrichsen died at her home on South Third Street. She is buried in Diamond Grove Cemetery in Jacksonville.

This entry was posted in Arts and letters, Prominent figures, State government, Women. Bookmark the permalink.