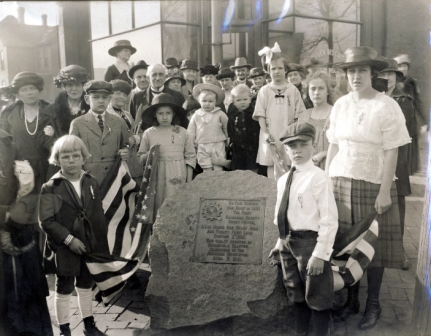 Ten children were the ceremonial participants a century ago, when the Springfield Chapter Daughters of the American Revolution organized a 100th-anniversary commemoration of the founding of Sangamon County.

The DAR sponsored the installation of a plaque, mounted on a granite boulder, at Second and Jefferson streets on April 2, 1921, 100 years to the day after the election of the first Sangamon County officials. The site was the location of the first Sangamon County courthouse, a log building constructed by early settler John Kelley. Corrected: See below.

The children all were descendants of early settlers involved with creation of the county.. They were identified in the April 3, 1921 Illinois State Register:

“Children were chosen for this part of the ceremony by the committee for the reason that the marking of this historic site is for future generations, and these children can pass on the legendary lore,” the Illinois State Journal reported earlier.

On This Corner Was Built in 1821 The First Sangamon County Court House. A Log House One Story High and Twenty Feet Long costing $72.50. This Marker Erected By Springfield Daughters of the American Revolution April 2, 1921.

The plaque was among five placed about the same time by the Springfield Chapter DAR. The others were at the old Wabash railroad station, 10th and Monroe streets,  site of Abraham Lincoln’s Farewell Address to Springfield; on the south side of the then-courthouse, today’s Old Capitol State Historic Site, bearing the names of Revolutionary War soldiers buried in the county; at Springfield High School, site of the first high school in the county; and on a tree in the Statehouse yard “in memory of the soldiers in the (first) World war.” 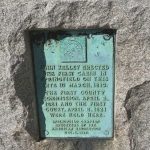 Correction: This entry previously said the DAR plaque commemorating the site of the first courthouse had been moved to the front of the Willard Ice Revenue Building farther west on Jefferson Street. In fact, that plaque remains in its original location at Second and Jefferson streets.

The plaque in front of the Revenue Building actually denotes the approximate location of the first settlers’ cabin in Springfield. The DAR erected that plaque on Dec. 3, 1927 on the northwest corner of Klein and Jefferson streets. The Revenue Building, erected in the 1980s, wiped out that corner.

John Kelley erected the first cabin in Springfield on this site in March, 1819. The first county commission, April 2, 1821 and the first court, April 3, 1821 were held here.
Springfield chapter Daughters of the American Revolution
Dec. 3, 1927

SangamonLink apologizes for the error.