Leroy Key made his mark in history as a prisoner of war.

Key died in Springfield in 1880, possibly because of aftereffects of the time he spent in the horrific Confederate prisoner-of-war camp at Andersonville, Ga., during the Civil War. He is buried at Oak Ridge Cemetery. 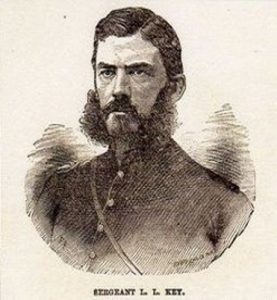 Key (1841-80) was a printer in Bloomington before the war. He joined the 14th Illinois Infantry Regiment in May 1861 and presumably was part of the regiment when it fought at the battle of Shiloh and elsewhere in the West. He was discharged from the 14th with the rank of corporal in March 1863, but re-enrolled that May in the 16th Illinois Cavalry, where he rose to the rank of quartermaster sergeant.

Key probably was captured by the Confederates on Jan. 3, 1864, in a battle near Jonesville, Va., known as “the Frozen Fight.” Portions of the 16th and another Union regiment were surrounded by about four times as many Confederates and forced to surrender. The 16th lost 356 enlisted men and 56 officers  in the battle.

Key was taken first to Belle Isle prison near Richmond and then transferred to  Andersonville (the prison’s formal name was Camp Sumter), which opened in February 1864. He was among the first 4,000 prisoners taken to Andersonville.

The National Park Service, which administers the site today, gives the following brief description of conditions in the camp:

Located deep behind Confederate lines, the 26.5-acre Camp Sumter … was designed for a maximum of 10,000 prisoners. At its most crowded, it held more than 32,000 men, many of them wounded and starving, in horrific conditions with rampant disease, contaminated water, and only minimal shelter from the blazing sun and the chilling winter rain. In the prison’s 14 months of existence, some 45,000 Union prisoners arrived here; of those, 12,920 died …

Union soldiers at Andersonville also were preyed upon by some of their own. A group of rogue prisoners, many inducted from the slums of New York City, terrorized other prisoners, stealing food, money and other belongings. They became known as the Raiders.

“By the end of June (1864),” the NPS says, “stories emerged that the Raiders committed crimes boldly, in daylight. Rumors included stories of raiders outright murdering other prisoners. The criminal activity fueled fear within the camp and authorities failed to set up any form of regulations or law enforcement inside the stockade.”

Key was the main organizer of the force of “Regulators” that broke the Raiders’ reign of terror. The New York Times described his role in an obituary published Dec. 4, 1880.

Life was in danger if these scoundrels suspected that money or food could be found in any part of the camp, and when, in June, they became so desperate as to make forays every hour, and disturbances were of constant occurrence, the more orderly prisoners could stand it no longer. The feeling of resistance developed silently, but it remained for Sergt. Key to take the lead in an organized effort to crush the “Raiders” and put a stop to their outrages. Gathering a band of trusty men about him, he stimulated them to make an attack upon and punish the offenders. …

The Regulators attacked the Raiders in front of their big tent, beat them back in disorder, after a savage encounter, and in five minutes put them to flight, capturing a number of prisoners.

Key himself told the Times earlier that 150-200 men made up the Raiders, while his Regulators amounted to about 400. After the Raiders were subdued, a prisoner court sentenced six of them to hang. Key supervised the executions as well. Because of the possibility that some Raiders might try to take revenge, Key and a few other leading Regulators were paroled back to Union lines after the executions.

Andersonville, however, remained a prison camp until the end of the war. Prison commandant Capt. Henry Wirz was hung for war crimes, although he may not have been primarily responsible for the worst of the conditions there.

After the war, Key, who was born in Mississippi, moved back to his native state for a time. He is listed as a resident of Jefferson County, Miss., in the 1870 Census.

Key apparently moved to Springfield n late 1879 or early 1880. His Illinois State Register obituary, published Dec. 3, 1880, said he had been “a resident of this city for about a year past.”

During his residence in this city, Mr. Key was general agent for a book called Andersonville, and also for other publications. He was a member of the Odd Fellows, of the Knights of Pythias, and was secretary of the State Association of Union Prisoners of War.

A coroner’s jury at first ruled Key’s death a suicide. He had recently bought arsenic rat poison; his symptoms before he died, including severe nausea and vomiting, could have been evidence of arsenic poisoning; and he supposedly had talked about suicide to his doctor.

However, after friends and family protested, the jury re-convened. Key’s wife Amanda said her husband had long been troubled by spells of vomiting and had suffered from heart disease for two or three years. “We had been greatly troubled with rats,” she added.

Dr. J. Norman Dixon told the reconvened jury he tested Key’s body for arsenic and found no signs of the poison. The jurors reversed themselves, declaring Key to have died “from natural causes or from some cause to the jury unknown.”

The Times’ obituary made a reasonable assumption about Key’s death:

Key was naturally a man of strong constitution, but his health was undermined by his prison life, and his death is believed to have been hastened by his experience of the horrors of Andersonville.

Key is buried in the Odd Fellows plot in Block 7 at Oak Ridge. His grave originally was unmarked, but brothers Frank Crawford of Belvidere and John Crawford of Paris, Ill. learned that Key had been buried in Springfield. They spearheaded an effort to give Key a gravestone; it was dedicated on Memorial Day, 2011.

This entry was posted in Military, Prominent figures. Bookmark the permalink.