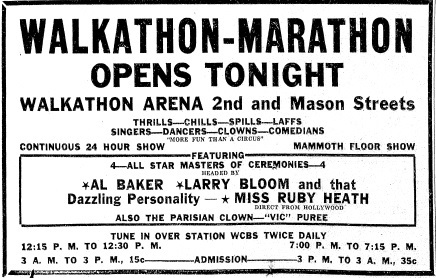 When Springfield’s Walkathon Derby shut down on May 18, 1934, it left a mountain of unpaid bills and eight groggy couples.

The competition, held in a large tent at Second and Mason streets, started May 5 with several dozen pairs of entrants. In addition to walkers, promoters promised 24 hours of entertainment daily, featuring bands, masters of ceremonies, comedians and a clown.

(The tent was) filled with circus seats, and included a pretentious platform, loud-speaker system, and an orchestra stand. Spectators did not throng to the show in anticipated numbers, however, and cash remuneration was lacking for most of the contestants and staff of attendants, employes said.

The climax came last night when a local tent concern secured a writ of attachment, which was served about midnight. …

Those connected with the show, including several footsore and weary marathon walkers, were doubtful as to the whereabouts of any cash receipts. Practically all remain unpaid, they said. 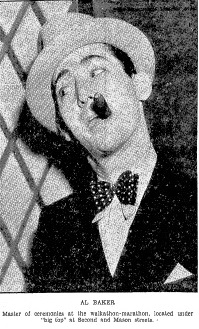 In reporting the closing, the Journal said the walkathon started with 24 couples. In an ad disguised as a Journal story on May 12, the promoters claimed 36 couples entered the competition, including one from Paris, France. However many there were, most of the contestants were from central Illinois, the Journal said in its closing story.

The promoters promised a $500 prize to the last couple standing, although any couple that finished the first week was supposed to receive $10.

“The Walkathon also features four masters of ceremonies, headed by Al Baker, joy-boy of song, who is assisted by Larry Bloom, Little Jack (Falls) Little, and Miss Ruby Heath,” the May 12 story said. “The Walkathon broadcasts three times a day over station WTAX.”

The walkathon’s owner reportedly was George Reed of Joliet. Police seized an automobile belonging to the show’s manager, identified only as William Welsh, when they shut down the contest. That may have been the only asset the walkathon had available for surrender; there was no followup story in the Journal, and it seems probable that most, if not all, of those involved in the show got no money from it.

One pair of competitors may have left the walkathon happy anyway: Georgie Woods and Lester Lancaster, hometown(s) not given, were married under the big top the evening of May 18, just a few hours before police shut down the show.

The debacle also led the Springfield City Council to enact new rules for marathon contests. The month after the walkathon folded, the city decreed that future marathon promoters had to post a bond guaranteeing payment of prizes and had to obtain a city license – the fee for which was $500, so high that walkathons were essentially priced out of Springfield.

This entry was posted in Amusements, Spectacles, Sports and recreation, Uncategorized. Bookmark the permalink.