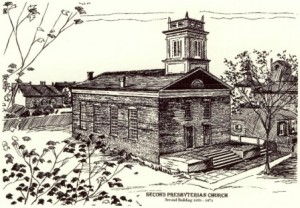 Although some researchers ascribe the split to a dispute over slavery, with Second Presbyterian members supporting abolition, a 1953 church history — Ten Ministers, written by First Presbyterian member Roger Chapin — says the division actually was caused by doctrinal differences:

Dr. D.S. Johnson, pastor of the Second Presbyterian Church at the time of its Fiftieth Anniversary, stated … that its birth could be traced to revivals held in the First Church in 1834, as a result of which “a deep desire had taken possession of some hearts in the First Church for a more pronounced spirituality in the church. In their view worldly influences had asserted too great a control in the affairs of the congregation.”

Another cause asserted at the time was that the First Church was not sufficiently enthusiastic about abolition. This Church was never an ardent supporter of abolition but it is clear that the slavery question did not enter into the trouble as the position of both churches on this question was alike as late as 1837 …

The 1837 question involved a proposal in Presbytery, the regional church governing body, to make slaveholding “a bar to communion,” Chapin reported.

This resolution was opposed by both Dr. (John) Bergen (First Presbyterian’s pastor) and Reverend Dewey Whitney, then the pastor of the Second Presbyterian Church, and they agreed in supporting a milder resolution looking to the ultimate extinction of slavery.

Local historian Richard Hart, however, says Second Presbyterian did gain a reputation as the “abolitionist church.” In the Summer 2006 edition of “For the People,” a newsletter of the Abraham Lincoln Association, Hart wrote that some Second Presbyterian members opened their homes to runaway slaves as part of the Underground Railroad.

In his 1985 A Walk Through Oak Ridge Cemetery, Floyd Barringer was candid about the approach to faith taken by Second/Westminster’s original congregation.

The founders of our church were moral, dour, and puritanical. They were prohibitionist and abolitionist. Their elders were the ascetic guardians of the morals of the congregation. Between 1835 and 1867, 31 members were excommunicated, most of them for “breach of the covenant vows” and “nonattendance at communion.”

Second Presbyterian Church originally was housed at Fourth and Monroe streets. The drawing above depicts the second church building, which was in use from 1839 to 1871.

The present Westminster church at Walnut and Edwards streets was dedicated in 1908. The church’s bell, however, dates from the 1840s. A virtual tour of Westminster Presbyterian’s imposing structure is available on the church website.

Hat tip: Thanks to Nancy Chapin for research assistance.