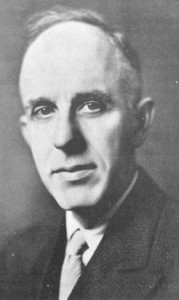 , to carry out his vision of a publicly owned Springfield water system.

Charles Spaulding designed and supervised City Water, Light and Power’s innovative filtration and precipitation systems, technology that later spread across the nation and the world, but turned down royalties for his patents. “He was a scientist, not a financier looking for personal gain,” CWLP said in a memorial when Spaulding died.

“Charles was a quiet, unobtrusive, unselfish man, much in contrast to Willis, with his fiery red hair, who engaged in fierce battles … to give Springfield one of the finest utility systems in the world …,” the CWLP statement said.

Spaulding received both the John M. Goodell Prize and the George Warren Fuller Award from the American Water Works Association for his contributions toward improved water supplies. He also received a U.S. Army award for exceptional service for designing a mobile water purification unit.

Charles Spaulding left CWLP after his brother was defeated for re-election as utilities commissioner in 1943. However, when John Hunter, one of Willis Spaulding’s successors, asked Charles Spaulding in 1959 to return as water technologist for the Lakeside Filter Plant, Spaulding agreed. He remained in that role until his death — but refused any compensation for the entire time.

Spaulding also was a talented musician. “After his retirement, he would play Chopin by the hour,” the memorial leaflet said. “Miss Elizabeth E. Graham tells of musicians in the neighborhood who came to ask ‘Who is that amazing musician who plays Chopin often on your grand piano?”