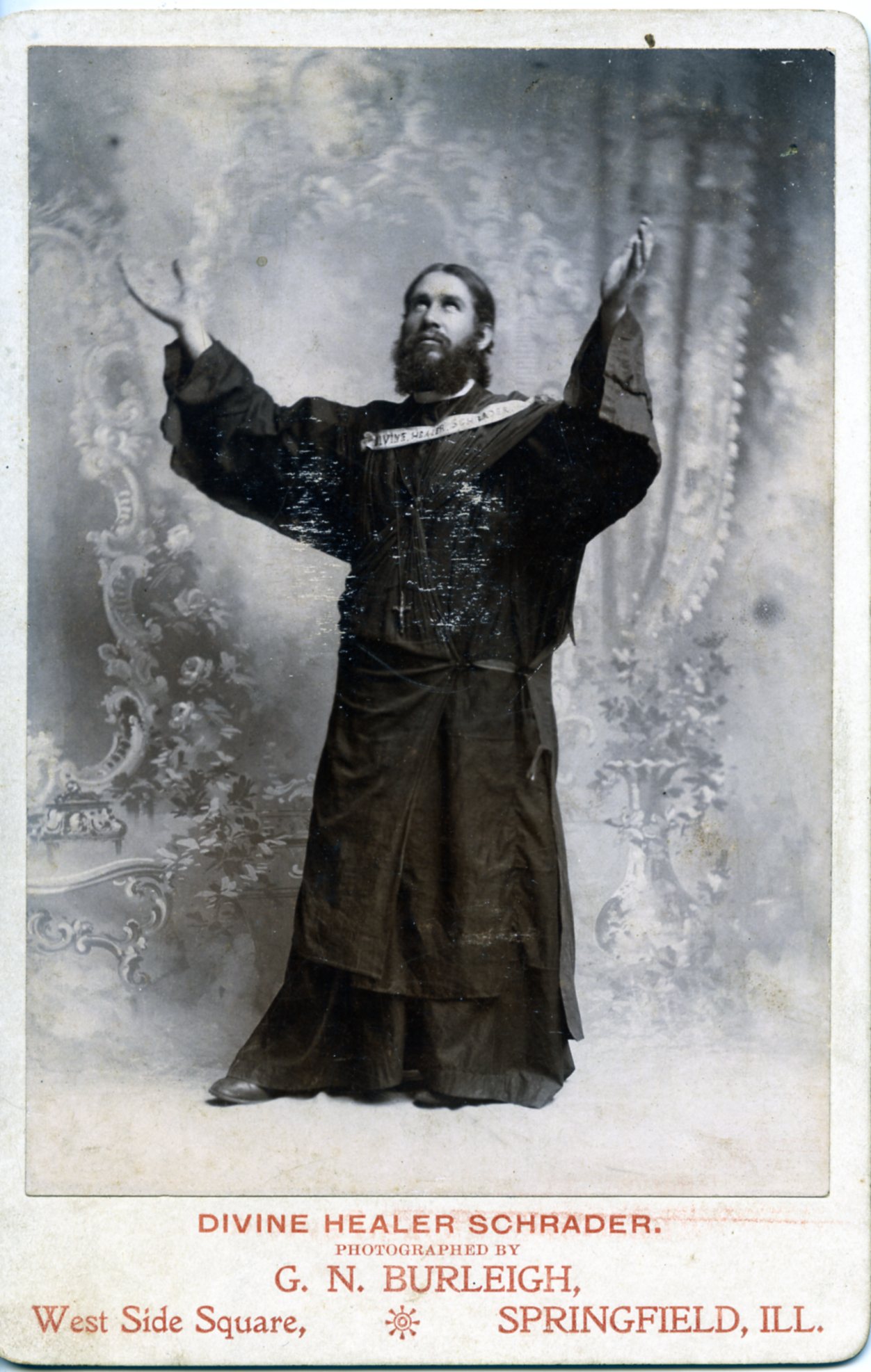 George Gutzwiller sold photos of the “divine healer” for 25 cents each at his restaurant, 517 E. Monroe St. (Sangamon Valley Collection)

August Schrader, “the divine healer,” set up shop in Springfield for 10 days in 1896. Thousands of people, complaining of maladies ranging from arthritis to kidney disease to blindness, sought treatment. Crowds blocked downtown streets, and trains brought people to town from as far away as Peoria so Schrader could lay his hands on them.

Schrader, in short, was a spectacle. And to the business people – notably, railroads and saloonkeepers – who sponsored his appearances around central Illinois, that was pretty much the point.

In fact, Schrader had a track record as a con man. But he apparently was persuasive and charismatic (despite some puzzling personal habits), and he may even have believed in his own divinity. But, most importantly, he drew crowds.

Dressed in a long robe with a sash that said “Divine Healer” across his breast, Schrader laid hands on the ill and invalid in assembly-line fashion. “People were scrambling and walking over one another even to get up stairs,” the Illinois State Journal reported on Feb. 23, Schrader’s first full day in town.

The scene presented was a queer one. Children, men and women were standing around on crutches. Others had bandaged heads, some had sore eyes, and many others had ailments that were not visible.

The “divine healer” worked hard for six hours during the day and treated in that time several hundred people.

At times, the crowd blocked the 100 block of North Fifth Street, where Schrader first set up headquarters, and police were called to clear the street. When he moved to a building at Seventh and Adams streets, Adams likewise became “of little use for traffic,” the Journal said.

“Pleasure riders make it a point to have the headquarters on their route through the city, and … the street is full of vehicles all day long,” the Journal said. The crowds included skeptics as well as believers, and watching the arguments apparently was part of the attraction. But the debates were civil; the newspapers reported only one arrest, for drunkenness, in connection with Schrader’s visit.

Schrader took no money in return for his treatments, although he did accept presents. Springfield restaurateur George Gutzwiller, who acted as Schrader’s manager for about six weeks in 1896, told the Journal later:

I will state that all the time I was with (Schrader), he never, either directly or indirectly, received a cent of money from any source. He would accept clothes as a present, but would not take the money to purchase them with. He had implicit faith that the Lord would provide.

Gutzwiller (1844-1907) invited Schrader to town after seeing him practice “divine healing” in Lincoln. After Springfield, Gutzwiller and his family traveled with Schrader to Alton, Roodhouse, Peoria and the Cincinnati area. (Gutzwiller’s wife, Ida, was considerably more skeptical of Schrader than her husband. “I think he’s crazy,” she said of her husband. “He is a great believer in Schrader, but I won’t say what I think.”)

At Alton, the Rev. R.J. Kellogg of Flora confronted Schrader, calling him “a fraud and a swindler.” Kellogg said he had met Schrader before in Flora, where Schrader had claimed to be a Methodist preacher from Wisconsin whose church had burned down.

“On being identified,” the Journal reported, “Schrader dropped the Christian-like calm he has affected for a worldly wrath and frantically denounced the … minister as a ‘dirty devil,’ ‘a liar and a cur,’ and attempted to assault him with a cane.”

After the denouncement, Schrader opened up business with an immense crowd of patients, many of whom came on the reduced rates being given by the railroads. … In the meantime, the ‘Healer’ tells his numerous patients that these persecutions do not bother him and are similar to those inflicted on the real Christ.

Schrader’s success in Springfield probably was due partly to a couple of young, talented public relations operatives, Will Colvin (1876-1982) and S. Leigh Call (1872-1952). They seem to have planted a series of adulatory stories about Schrader in the local newspapers, especially the Journal. Colvin would go on to a long reporting career with the Illinois State Register and Chicago Inter-Ocean, and Call was co-owner of the Journal from 1918 to 1928.

Schrader didn’t have the same support in Peoria, where, Gutzwiller said, “the newspapers attacked Shrader (sic) and we were unable to do any business.” Gutzwiller and family left Schrader and returned to Springfield after another lackluster response in Ohio and Kentucky.

In a statement to the Journal in November, Gutzwiller conceded that he no longer believed Schrader had any divine powers. But he still did some good, Gutzwiller said.

It is plain to my mind that Shrader is not endowed with divine power, but that he possesses what is known as animal magnetism to a remarkable degree. … You know, there are hundreds of people in every community that believe they are ill when there is really nothing the matter with them. … I believe he can aid one that has faith in him.

Aside from Schrader’s claims to be divinely inspired – Gutzwiller believed he was deluded but sincere – Schrader had some other odd habits. “He ate but little, and indulged in meat but on two occasions. His chief articles of food were oranges, bananas, pumpkin pie and milk,” Gutzwiller said.

You know, any generously inclined person that had been helped by the healer would hardly be likely to show his appreciation by offering to pay for a bath for the man. Consequently his ablutions were of rare occurrence, and he was arrested at Cincinnati on the charge of being a menace to the public health.

The original “divine healer” in the U.S. seems to have been an Alsatian immigrant named Francis Schlatter. August Schrader may have copied his persona, including the refusal to take money for treatments, from Schlatter, who worked in the West. The long robe and sash, however, were Schrader innovations.

Schlatter vanished about 1896. According to the crime website Captured and Exposed, that “created an irresistible opportunity for con men and imposters” to all claim they were the original Francis Schlatter.

Schrader hooked up with one of the bogus Schlatters somewhere around 1908, Captured and Exposed reports.

Styling themselves as “King” Francis and “Prince” August, the pair traveled around America and Canada organizing churches — they weren’t picky about the denomination — and officiating at weddings and funerals.

Schlatter and Schrader eventually set up shop in Los Angeles. Abandoning the no-cash policy, they offered – for a fee – to say prayers for sufferers and to mail them “divine handkerchiefs” that would cure their ills. When the handkerchiefs inevitably failed, postal inspectors had the pair indicted for mail fraud.

Schrader died, at about age 49, while his trial was under way. Schlatter – real name either Jacob Kunze or James Dowie, according to Captured and Exposed – was convicted and spent a year in prison.

Hat tip: To Curtis Mann of Lincoln Library’s Sangamon Valley Collection for drawing our attention to the Divine Healer.

This entry was posted in Amusements, Journalism, Medicine, Spectacles. Bookmark the permalink.

2 Responses to The “divine healer” sensation, 1896