For 15 years early in the 20th century, one of the United States’ most sophisticated private telescope systems operated from a modest house on North First Street in Springfield.

The Loomis Observatory eventually housed four telescopes – two larger scopes and two small “finder” telescopes – along with a camera arrangement and a spectroscope, which allowed astronomers to determine the direction and speed of moving objects, among other things. 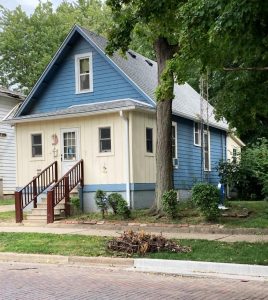 1126 N. First St., 2020. The observatory was attached to the near corner of the house, where the tree and bushes are in the photo. (SCHS)

The observatory was a family project. The main telescope, with a 7.5-inch lens, was put together by Leverett Loomis (1853-96), a jeweler and inventor from Carrollton. His brother, lawyer Webner “W.E.” Loomis (1851-1921), built an addition to the house at 1126 N. First St. to house Leverett’s telescope.

Leverett’s daughters, Myra (1882-1939) and Mabel (1880-1936) Loomis, lived in the house with their unmarried uncle, W.E. The two women worked at Sangamo Electric, and all three tended the observatory.

The Illinois State Journal announced the opening of the Loomis Observatory in a story published Sept. 3, 1905.

Residents of this city interested in astronomical research soon will be greatly aided in their efforts to gain more knowledge of the universe by a giant telescope located at 1126 North First street. The instrument, which is said to be one of the most powerful in the country, represents many years of work on the part of L.W. Loomis, now deceased, and will soon be in a finished state.

A special addition has been built to the residence at that number to accommodate the telescope and is perhaps the first thing to attract attention about the place. It is similar in form to a huge cylinder set on end and is twenty feet in diameter. The roof is a conical cap, with sliding doors of glass, and standing in the center of this department on a solid base of concrete is the telescope. This instrument is so mounted that it may be turned in any direction desired by a crank, and another attachment at the side of the building enables the user of the instrument to turn the roof cap so that the telescope may be pointed at any portion of the sky at any desired angle.

The whole is very conveniently and firmly arranged, according to the latest standards for exact measurements, and the work shows the expenditure of much money, care and energy.

The Loomis Observatory seems to have operated from 1905 until W.E Loomis died in 1921. It was open to the public at no charge “on very clear nights,” according to the 1915 Springfield City Directory.

Aside from the professions that provided their livelihoods, the Loomis brothers were inveterate tinkerers. Leverett held a patent for a low-friction pulley chain and invented a new type of induction coil. In optics, he built an eight-lens microscope as well as at least one other large telescope, which he donated to Blackburn College in Carlinville. It was in use from 1885 to 1918 and then brought out of storage to again view the skies for an undetermined period of time in the 1940s. For his part, W.E. Loomis patented a spring-loaded gun magazine.

As a lawyer, W.E. Loomis had a varied civil and criminal practice. His most famous cases probably were two in 1894 in which Loomis headed a group of lawyers who unexpectedly won acquittals for a Springfield physician charged with killing two women in botched abortions. “Dr. John H. Lawrence, contrary to general expectations, is again a free man,” the Illinois State Register reported after the second acquittal. 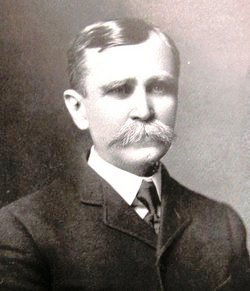 Loomis especially hoped schoolchildren would visit his observatory. A 1915 article in the Journal (probably written by Loomis himself – the writer was identified only as “L.E.W.,” an anagram of Loomis’ initials) explained what children would see.

The program usually includes the mountains, valleys, plains, etc., of the moon, Saturn, which is now at its best in showing the ball rings and moons, and also the … Andromeda and Orion Nebulae, and many millions of greater suns than is our sun. Such lessons will evidently prove the most valuable ones that the children have or ever will receive.

The Loomis house still stood at 1126 N. First St. in 2020, but the observatory addition had been removed decades earlier. (According to the 1917 Sanborn fire insurance map of Springfield, the observatory was on the southwest corner of the building.)

W.E. and Myra Loomis are buried at Oak Ridge Cemetery, while Mabel Loomis is buried in her hometown of Carrollton.

The top of W.E. Loomis’ tombstone displays an engraving, worn down over the years, of the solar system.

This entry was posted in Prominent figures, Science. Bookmark the permalink.