The Franklin Life Insurance Co. had to tear out windows and walls to accommodate Springfield’s first computer. Then it had to hire a derrick to hoist the “electronic brain” five floors up.

Franklin Life ordered the $1 million Univac from Remington Rand in the summer of 1952. When installed in December 1954 at the insurance company headquarters at Sixth Street and Lawrence Avenue, it was the 15th Univac ever built.

Because so much of its business involved computations, the life insurance industry was one of the earliest computer adopters. Franklin Life was only the second such company to install a Univac – the  giant Metropolitan Life was first – but it pioneered many of the first commercial applications of computer technology. JoAnne Yates of the Sloan School of Management at Massachusetts Institute of Technology explained why in a 1993 paper.

In contrast to Metropolitan Life, Franklin Life, the second insurance firm to take delivery of a Univac, was a medium-sized firm with roughly 1% the number of policies held by Metropolitan. Thus it seems an unlikely candidate for such early computerization. But when it ordered its Univac, Franklin Life was in a period of phenomenal growth, having increased its insurance in force 1100% between 1939 and 1952 (with sales growing at over five times the industry growth rate). The company continued to grow, doubling in size between 1952 and 1956. Its management thus felt that the new technology was necessary to keep up with its demand. Moreover, it felt that the computer would allow it to delay a major new building expansion.

The relatively small size of Franklin Life, in relation to Metropolitan Life, both required and allowed it to apply the computer much more innovatively, consolidating operations well beyond what the Society of Actuaries committee had recommended:

A general survey indicated that to justify economically the equipment, a medium-size company — such as Franklin Life — would have to use the equipment for many applications. Included in Franklin’s applications are premium billing, premium accounting, dividend accounting, agency commission accounting, and valuation of reserves (once annually).

Using the computer, Franklin consolidated twelve separate files of documents and punched cards, operating from one master file and one address file for each policy. These files were maintained on magnetic tape, without the punched card back-ups Metropolitan Life and so many other insurance firms were unwilling to give up. The consolidation of so many files was enabled by having 240 character master files for each policy, which would have required three 80-column cards each. Interestingly, Franklin Life, like Metropolitan Life, estimated a four-year payback period, though subsequent savings per year were estimated to be quite high.

This comparison highlights one of the drawbacks faced by the largest companies: the size of their applications. At this period and later, sheer quantity of policies in comparison to the size of available machinery and the time within which a particular application had to be run limited the amount of creative consolidation these firms could undertake. Moreover, the possibilities for easy paybacks from simply speeding up individual applications may have deterred these firms from pursuing more complex “reengineering” of processes to make the largest gains. Medium-sized firms such as Franklin Life, on the other hand, had the capacity and flexibility to try more innovative applications of their computers.

Jim Cranwill (1925-2014), later a division vice president at Franklin, was given the task of putting the new Univac to use. In a 1983 State Journal-Register article, Cranwill remembered he was called into his boss’s office and told he would have to go to Pennsylvania to learn how to use a Univac. “I said, ‘What’s a Univac?'” he told reporter Clark Spencer. 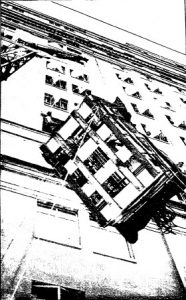 A portion of the Univac is hoisted up to the fifth floor of the Franklin Life building. (Courtesy SJ-R)

Many people outside the company doubted the value of computers. So did some inside it, Cranwill said, especially one vice president. So a Franklin technician worked out the present value of $1, printed it out and gave it to the vice president. The vice president checked the computer’s calculations against the value given in a book he had in his office. The results were different.

People were so interested in the new technology that Franklin Life built a special viewing room for visitors. The company continued to expand its computational abilities, buying a second Univac in 1959 and a third in 1962 (when the company also put another new technology, the optical scanner, into use).

Franklin Life’s first Univac was retired in 1968. Various parts were shipped off to museums, including the Smithsonian Institution. Franklin Life itself was taken over by American Brands in 1979. After a series of consolidations, what was left of the company moved out of the Sixth and Lawrence complex in 2008.

Correction: This entry has been edited to correct the spelling of Jim Cranwill’s last name.

This entry was posted in Business. Bookmark the permalink.