A wild shootout in Christian County in 1932 ended the bloody history of a Springfield-based murder and extortion gang. 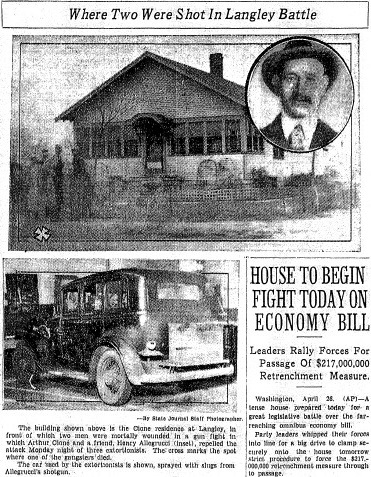 Authorities claimed their followup investigation solved a half-dozen area slayings. But Springfield’s chief of detectives struggled to explain why police hadn’t acted sooner against the mobsters, one of whom had been named as a suspect in a Springfield killing 18 months earlier.

Aside from alleged murders-for-hire, the gang ran an extortion racket. That’s what took them to Langley (now usually called Langleyville), an unincorporated village near Taylorville, the evening of April 25, 1932.

The gunmen – Pete LaRocca, Jack Scire and Vincenzo Mantella, all of Springfield – had told Langley resident Arthur Cioni they would kill him and his family unless Cioni paid them $3,000.

Instead, Cioni called police, who decied to ambush the extortion gang. Two Christian County sheriff’s deputies, two Peabody Coal Co. security guards and two officers from the Illinois Highway Patrol were stationed at Cioni’s home. Cioni himself and a friend, Enrico “Henry” Allegrucci, also armed themselves and laid in wait.

Walter Moody, chief of the Illinois State Highway Patrol, explained later how the trap was set up – and how it almost fell through.

“A description of the car to be used by the men was secured and we also knew the names of the three extortionists who were to take part in the plot to secure the money from Cioni.

“LaRocca, Scire, known to us as ‘Black Sammy,’  and Vincenzo Mantella of 1024 East Washington street were known to be the members of the band. LaRocca and Scire made several visits to Cioni and demanded the money. The first demand was for $3,000, but finally on Saturday the amount was cut to $1,500.

“Monday morning, I went to Taylorville and together with Sheriff (Charles) Weineke we assembled plans for the trapping of the gang at Cioni’s house on Monday night. …

“About 5 o’clock the officers were stationed at their posts in Cioni’s house. Two deputy sheriffs, the Peabody officers and two highway police were placed at the home.

“A call came to Cioni’s house telling the Peabody men and the sheriff’s men to come to Taylorville, that the plans had been changed. The four men departed, and this left Cioni and Allegrucci at their posts in the home. The highway police were stationed in the garage at the rear of the house.

“About 7 o’clock the car with the three extortionists in it appeared. They drove up in front of the house and stopped facing west. LaRocca alighted from the car and went to the front door of the house. After rapping and receiving no answer he went to the back door. Again he received no answer and walked back to the car and told the other members of the group that they ‘wouldn’t answer so give ‘em the works.’

“When LaRocca and Scire began firing at the house with revolvers, Cioni, who is an expert trapshooter, returned the fire from the house. Allegrucci was shot by a bullet from Scire’s gun and fell to the floor dead. As he dropped he fired a shot from the shotgun he was holding. This charge sprayed the bushes in front of the house.

“One charge from a gun struck LaRocca and he fell to the ground. Scire, after firing one shot at the house and hitting Allegrucci, jumped into the car and with the driver speeded away.”

Highway patrol cars had been stationed on roads leading out of Langley, and troopers Frank Nuckols and John Connors saw the extortionists’ car speeding through Kincaid. The ensuing chase ended in Taylorville, where the gunmen’s car hit a bump and blew a tire, Moody said. Scire and Mantella jumped out of the car firing their pistols at the troopers, who shot back.

Scire fell dead, hit in the face by a shotgun blast. Mantella, though apparently wounded, escaped on foot. Newspaper records indicate he was never found.

At Moody’s request, Scire’s .32-caliber automatic pistol was taken to the Scientific Crime Detection Laboratory at Northwestern University. Bullets from it were found to be identical to the ones that killed Springfield gambler Charles Dawson in December 1931. Police said Dawson had defied a crime syndicate that wanted to take over gambling in the city.

The Illinois State Journal also said another murder victim, former police officer George Mann, had given a deathbed statement to Detective Austin Jones identifying Scire as the man who shot him in November 1930. Chief of Detectives C.W. Jesberg, however, didn’t act on the information, the Journal said in several stories that carefully suggested Jesberg was generally reluctant to investigate local mob activities. (In the Mann case, Jesberg said Mann wouldn’t talk to him because of a longstanding personal dispute and that authorities otherwise had no evidence against Scire.)

“Existence in Springfield of an organized gang of murderers known to police but never molested by them was admitted by authorities during the investigation last night of the triple killing at Langley Monday night” was how the Journal led off its followup article April 27.

That story said the LaRocca/Scire/Mantella death toll may have amounted to seven people in Sangamon and Christian counties: Allegrucci, Dawson and Mann; Thomas Saranita and Sam Albrezzi, whose bodies were found on the side of a road near Glenarm in December 1931; and Dominic Severi and his wife Pia, who were shot to death in the basement of their Langley home in February 1932.

“LaRocca was generally credited by Italian residents of Langley as a collector of ‘hush money’ from persons engaged in illicit liquor business,” the Journal reported in another article.

An anonymous Journal editorial writer, however, was skeptical about authorities’ claims to have solved so many murders with the deaths of LaRocca and Scire.

“Now that Jack Scire is dead, he is pictured as the super-killer,” the newspaper said April 30, 1932. “All unsolved crimes can be attributed to the slain Scire. He may be the answer to the ages-old question: Who killed Cock Robin?”

The Journal did, however, commend Moody for leading a force willing to act against gangsters, implying that other police agencies – presumably including the Springfield Police Department – were not so diligent:

The little band of officers who patrol the highways has escaped besmirchment by the criminal element. It is pitifully wanting in numbers for the territory it must cover, but it is clean. Therein lies its strength. Uncontaminated, it is free to do its duty.

Persons who have been threatened by extortionists need not fear, when they confide in one of these officers, that they are talking to a man who is under obligations to a murderous underworld or who has been cowed by the guns, bombs and torches of gangland.

More: For more on some of the crimes mentioned above, see SangamonLink entries “Prohibition violence in Sangamon County” and “Gambling rivalry, 1931.”

This entry was posted in Crime and vice, Italians, Law enforcement. Bookmark the permalink.