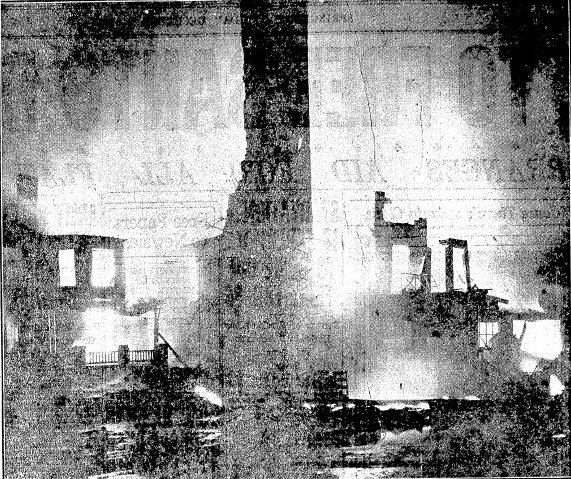 The Roosa-Diller fire at its height, just after the corner building collapsed (Courtesy State Journal-Register)

A “small army of suffering humanity” poured out onto the frozen streets of Springfield when a fire destroyed two dilapidated apartment buildings on Dec. 23, 1920.

A passerby discovered the blaze about 7:30 p.m. He alerted residents and the Springfield Fire Department. No one was hurt in the blaze, but the alarm sent 200 people rushing out of the buildings, many of them in their nightclothes.

A total of four buildings at First and Washington streets were demolished by the fire. However, almost all the evacuated residents lived in two adjoining four-story tenements known together as the Roosa-Diller Flats.

Eleven families, a total of 74 people, lived in the corner building at  100-02 E. Washington St. It was owned by plumber Edward Roosa when the fire broke out – Roosa had signed a deal to sell the apartments to Col. James Jefferson, but the sale wasn’t scheduled to close until Jan. 1. Roosa’s shop was on the ground floor, and the fire apparently started because a lit cigarette or cigar was left too close to some insulating materials in Roosa’s basement.

The adjoining building at 104-10 E. Washington St., owned by Isaac Diller, housed 126 people from 26 families. The Independent Thresher Co., a Diller enterprise, operated out of the first-floor storefront.

No deaths or injuries occurred because of the fire, partly, the Illinois State Register reported, because residents already knew the buildings were fire hazards. City officials had considered condemning the structures, the Register said, but held off because “of the long court litigation that would have ensued.”

Still, some escapees had close calls, according to the Illinois State Journal.

In many instances mothers returned to the flaming structure to carry out their young and the first army of volunteers that reached the scene saved the lives of a mother and baby by rushing to the upper floors of the burning structure and carrying them to safety. …

The double building now a mass of ruins has been the subject of controversy relative to its safety for a decade. On one or more occasions official objections to its make-up were made with the result that changes were made with a view of complying with the fire regulation. A majority of the families lived in limited quarters and in some instances five or six persons made their permanent homes in two or three small rooms. …

“God only knows (said Fire Chief Matt Cullen) what would have happened if the fire had broken out at the midnight hour. In my judgment there would not have been a possible chance of saving the women and children. The building was far from fire proof and I know that it would have been impossible for rescuers to make a successful effort if all had been asleep.”

Neighbors and passersby mobilized to care for the fire’s victims.

Standing in the nearby streets were children suffering from the zero weather. Sturdy men and willing women took off their overcoats and cloaks, wrapped them about the shivering forms of the little ones and hurried them to nearby homes. Men immediately began a subscription and perhaps never before in the history of Springfield did “good fellows” respond so quickly. 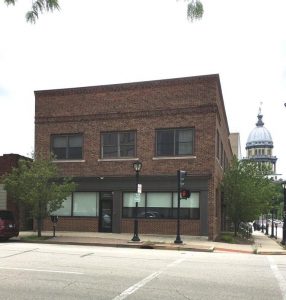 Within a few hours, all the victims had found temporary shelter, although some of the displaced men ended up spending the night sleeping on pool tables. The Red Cross, Springfield’s Associated Charities, the Washington Street Mission and the newspapers all began drives to provide homes, clothing and furniture for the families.

The city, made extra-generous because the fire happened so close to Christmas, responded quickly. An emergency relief committee headed by local business people set up headquarters in the Journal’s business office. On Christmas Day, the newspaper reported:

Residents of the city in all walks of life, in keeping with the Christmas spirit, responded nobly to The State Journal’s request for financial relief and clothing. Scarcely had the sun appeared over the eastern horizon yesterday morning, when men, women and children flocked to The State Journal office with bundles of clothing and cash donations. …

As a result of the responses, the two hundred persons who had narrow escapes from death in the burning structure and lost wearing apparel, furniture and other belongings, are assured of restoration of a part of their losses. When nightfall came, a large number had been provided with clothing from the supply depot which had been established in the state arsenal, and all had been given temporary homes at the residences of relatives, or persons living in the immediate vicinity of the scene of the fire.

Some of the displaced families needed support for several months, but all were off the books of the relief committee by fall 1921, the Journal said.

The Roosa-Diller Flats were replaced by several commercial structures, including a  two-story brick building at First and Washington streets.

That site was the home of the Burton M. Reid Co., a jewelry and watch wholesaler, when it was heavily damaged by fire in November 1957. This time, however, the structure was repaired; as of 2020, it housed offices.

This entry was posted in Buildings, Disasters, Fires. Bookmark the permalink.