Uncle Tom stands on the auction block to be sold to Simon Legree in the Big Tent Theatre’s 1936 production of “Uncle Tom’s Cabin” in Springfield. Unusually for the times, the cast was integrated (a line of African-American female singers/dancers is at stage right, ready to go on), and a close look at the backs of heads in the packed house suggests so was the audience. (Sangamon Valley Collection)

The Big Tent was formally part of the Federal Theatre Project, which in turn was a division of the New Deal’s Works Progress Administration. The project was designed to keep performing artists and theater professionals working during the Great Depression. The central Illinois troupe set up shop in Springfield in late July 1936 and put on a different play almost every week until late October.

The productions ranged from “Shepherd of the Hills” to “Uncle Tom’s Cabin;” Abraham Lincoln, naturally, was the focus of “The Great Commoner.” Most of the season’s 13 plays, however, were comedy/melodramas.

A news release apparently published verbatim by the Illinois State Journal on July 15, 1936, laid out the theater’s plans.

Plays presented under a big tent where the cool breezes bow will be the innovation of the Federal Theatre players when they open their summer stock engagement here next Monday night in their mammoth tent theatre located on West Grand Avenue  and the Outer drive.

This is probably the first and largest of the federal theatre shows to use a tent theatre and present popular Broadway plays and a large variety of vaudeville at popular prices. The entire personnel of the organization, including actors, vaudeville artists, musicians, directors, stage mechanics and ushers will number over one hundred. 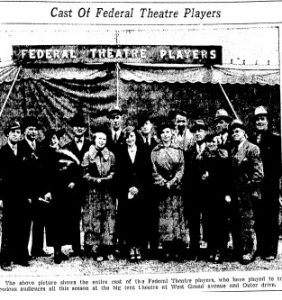 Plays were presented six nights a week. The tent was dark on Mondays, and a new play debuted every Tuesday night, with the exception of the week of Aug. 18, when performances were cancelled for the Illinois State Fair. A 12-piece band accompanied the productions.

Audiences also got 15 minutes of vaudeville between acts of each night’s show – dancers, acrobats and especially The Buckaroos, a five-piece cowboy band – for their admission fee (25 cents for adults and a dime for kids).

The Federal Theatre Project, according to Wikipedia, was designed to “employ artists, writers, directors, and theater workers.”

It was shaped by national director Hallie Flanagan into a federation of regional theaters that created relevant art, encouraged experimentation in new forms and techniques, and made it possible for millions of Americans to see live theatre for the first time.

Among artists the project helped boost were Orson Welles, Arthur Miller, Elia Kazan and John Houseman. As many as 30 million people attended Federal Theatre Project productions between 1935 and 1939. 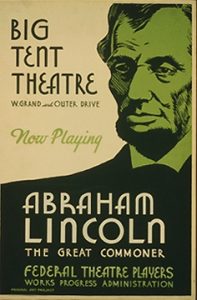 Poster for “The Great Commoner” (Library of Congress)

The Big Tent Theatre’s summer lineup in Springfield included an example of the kind of thing Dies objected to. Its biggest hit was the second-to-last play, “Uncle Tom’s Cabin,” which had a giant – and integrated – cast.

The Federal Theatre players will enlarge their own cast for this gargantuan undertaking. In addition to the army-sized white cast, there will be a whole company of colored performers used to furnish the local color, the singing and the dancing. “The Sepiatone Follies,” a fifty-people colored show, is being brought to Springfield in order that this may become “the world’s greatest performance of ‘Uncle Tom’s Cabin’ for all time. There will be a fourteen piece all-colored orchestra – one of the hottest units this side of New York, quartet, solo singers and every performer is a dancer.”

The troupe ballyhooed “Uncle Tom’s Cabin” with a downtown parade and with auditions to choose a blonde-haired local child to play Little Eva. The extra steps worked: the production was held over for three more days following its standard six-day run. The project’s weekly news release – apparently the Federal Theatre Project provided employment to press agents as well as actors – boasted:

During the current week’s production of “Uncle Tom’s Cabin” people have been turned away nightly. People have come to Springfield from seventy miles away to witness the grand old show. Never has such enthusiasm been shown over a stage show in Springfield.

The Big Tent was taken down following the final production, “Cheating Husbands,” on Oct. 18, and the theatre project moved on to perform in Peoria. 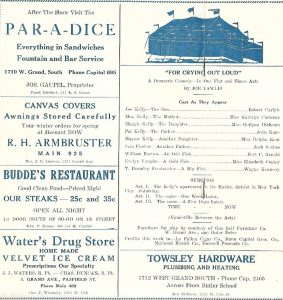 Hat tip: To Robert Lutz of Pekin, for bringing The Big Tent Theatre to our attention.

This entry was posted in Amusements, Arts and letters, Depression, Uncategorized. Bookmark the permalink.