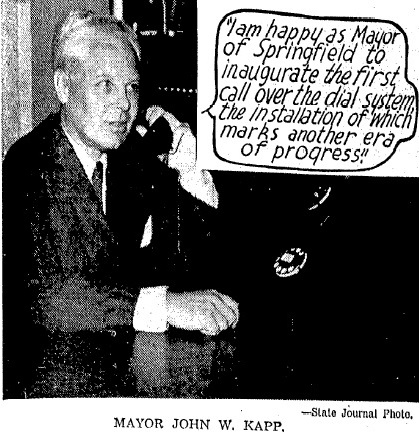 Dial telephones went into use in Springfield in dramatic fashion on Aug. 20, 1939. Four minutes before midnight, crews of workmen in two separate locations simultaneously disabled the old operator switchboards and plugged 21,000 telephones into the new one.

“With an ease that amazed those who watched,” the Illinois State Journal reported, “the Illinois Bell Telephone Co. at 11:56 p.m. yesterday threw into operation a complete dial system and moved its central exchange three blocks – all within the space of a few seconds.”

At 422 South Fifth street, a crew of men, when the signal was given, jerked scores of ropes, and thousands of heat coils jumped from the main distribution frames crackling like popcorn, cutting off every subscriber at once.

Three blocks away another group of ‘phone men waited a second or two for the clear signal, then jerked poles carrying strings which pulled small blocking tools from the banks of line and cutoff relays, establishing new connections for the thousands of subscribers to the Springfield telephone system. …

The changeover was the final step in the occupation of the new telephone building at Sixth and Cook streets, the corner stone of which was laid in July 1938. As the snapping of dropped cord pairs in the exchange on Fifth street was stilled, the end came to manual operation of telephones in the city. …

Inauguration of the dials climaxed a year’s preparation, all pointed toward preventing any slip which might paralyze communications in Springfield at last night’s zero hour. Nervous technicians checked and rechecked their plans, tested toe ropes strung behind the heat coils, looked at the knots in the strings that pulled the blocking tools – then grinned with relief when the job was successfully done. 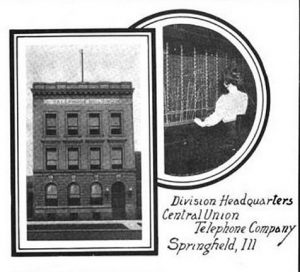 Previously, Springfield used alphanumeric phone numbers (in which every number was combined with the name of a region where it was assigned), a system that began in 1918 at the state Capitol. Parties calling the Capitol switchboard asked operators for “Capital 1400” to be connected to an office in the building.  The same number also connected to the Illinois Supreme Court, the state power plant and the utility commission, housed in the DeWitt Smith Building at Fourth and Monroe streets.

Springfield’s other alphanumeric exchange was “Main.”

While connecting through a telephone operator added a human touch to each call, direct dialing was both more convenient and more private. Most dial-phone numbers were five digits, although some were only four.

Sangamon County started to run out of five-digit numbers in the late 1950s.  In 1959 Illinois Bell added two digits – either 52 or 54 – to all existing local numbers in Springfield.  As a way to help people remember the longer numbers, Bell created two alphanumeric exchanges: LAkeside (52) and KIngswood (54). That system lasted until late 1961.

By then, local phone users apparently were accustomed to the longer numbers, and “Lakeside” and “Kingswood” fell by the wayside.

In 1960, Illinois Bell expanded its downtown headquarters, creating a complex that ran along Cook Street between Fifth and Sixth streets. The addition “brought more than 300 Illinois Bell employees and their families to Springfield from other communities,” the Journal reported. AT&T still operates from that complex. 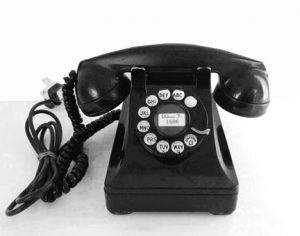 Touch-tone telephones were rolled out in central Illinois in 1965, although users had to pay an additional charge.

The state Capitol changed to an electronic switching system in May 1974. That same year, numbers starting with a 525 prefix were updated to the 782 prefix, the same prefix used for many state offices in 2020.  Pay phones were also updated so the public could reach an operator without needing to deposit a coin

Bell Telephone/AT&T was ordered to disband in 1982 by the Department of Justice due to “monopolistic practices.”  Its complete divesture in 1984 led to seven telecommunication providers handling long-distance, local and (eventually) cellular phone service across the U.S.

Ameritech became the provider in Illinois.  In 1999, Ameritech merged with SBC, formerly Southwestern Bell Corp., and in 2005, SBC became AT&T. AT&T methodically consolidated independent telecommunications firms and branched out by acquiring DirecTV in 2015 and Time Warner Cable in 2018.  As of 2020, AT&T’s umbrella also covered media providers Warner Brothers, HBO and Turner in addition to cellphone and fixed-line long-distance service.

This entry was posted in Business, Communications. Bookmark the permalink.