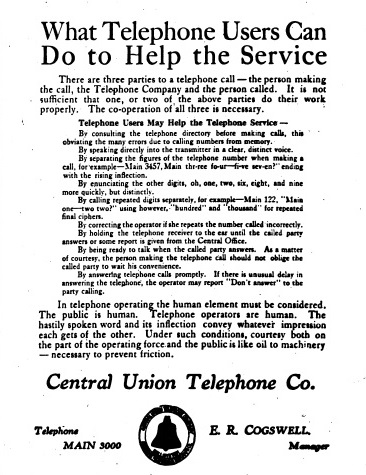 Sangamon County was a hub for early telephone development, thanks partly to its geographic position between St. Louis and Chicago and partly to the county’s relationship with Bell Telephone.

The company to offer broader telephone service in Sangamon County was the Central Union Telephone Co.  Incorporated in 1883, Central Union was a consolidation of Midland Telephone, Central Telephone and Western Telephone. It provided service throughout Illinois, Iowa, Indiana and Ohio, making it the largest telephone company in the world at the time.

The city of Springfield gave Central Union a franchise to “erect and maintain a telephone exchange… under contract with American Bell Telephone.” Newspapers from the time sometimes listed Bell phone numbers for customers, but their phone service actually was provided by Central Union.

Central Union had “some six hundred miles of telephone lines connecting … some fifteen towns in Sangamon County,” the Illinois State Journal reported in 1883. Among its customers were about 400 Springfield subscribers. Dr. Edwin S. Fowler had two phones — number 370 for his office and 380 for his residence. William B. Ridgely had phone number 387, and number 392 connected to the Charles R. Post residence. Number 396 would call the city’s baseball grounds.

Service to outlying areas of Sangamon County was provided by various independent phone companies, among them Central Union.

New Berlin got telephone service around this period, but not all of its residents were pleased. A German-born resident there was quoted as saying, “I went to the machine and talked the best kind of English to a friend off somewhere, and by and by we got into Dutch, and then the machine broke right down.”

At the time, telephones had neither a dial nor buttons, so a caller had no choice but to connect to an operator. The caller would pick up the handset and put it to the ear until an operator asked “Number, please?”  The person making a call would then tell the operator the single-, double- or triple-digit phone number they were calling and the operator would connect them. The operator (who usually was a young woman) might say “hello” after making the connection, thus ushering in the era’s nickname for operators – “Hello Girls.” 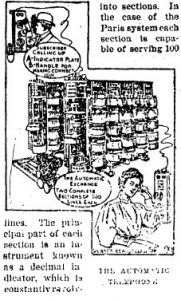 When American Telephone and Telegraph bought out American Bell in 1899, it became the parent company of the Bell System.  Alexander Graham Bell’s patents allowed Bell to have a tremendous lead on the competition. Nonetheless, by 1900 there were still about 6,000 independent telephone companies. It would take about 20 years for Bell to fully absorb all the independent telephone providers across the Midwest.

Around 1902, a second phone company began local service in central Illinois.  Inter-State Independent Telephone provided service as far north as Wisconsin and as far west as the Mississippi River.

As a marketing lure for local customers, Inter-State offered “free service every Sunday” between Springfield and nearby rural communities. The offer was a real benefit because Sangamon County suffered from very limited phone connections both within the county and to surrounding counties.

The Springfield City Council granted Inter-State a 20-year franchise to operate its phone system in competition with Central Union’s existing service, and the opening of Inter-State’s office at 513 E. Monroe St. began a long era during which two different companies served Springfield.

Business owners weren’t happy with that arrangement, which was expensive for them and confusing for customers. Some businesses subscribed only to a single service, but larger firms tended to keep their Central Union (“old phone”) numbers, but added Inter-State (“new phone”) service as well.  This meant they needed two telephone instruments and usually two different phone numbers.  (A few businesses did manage to obtain the same number on both systems.) Meanwhile, residents used two different telephone directories.

On the other hand, nobody was happy with Central Union’s service, and many people thought Springfield would benefit from competition.

“How are we to tell which one of these two companies can give us better service?” attorney James Patton asked an August 1903 meeting of the Springfield Business Men’s Association. “It is a well-known fact that the service of the old system is abominable. It is merely an institution for the promotion of profanity.”

Central Union executives admitted at the meeting that their service had “a large number of imperfections,” and promised to do better.

After a long debate, those at the meeting decided to wait a couple of months in order to evaluate both operations. In the end, Springfield had two competing phone systems for 16 years.

In 1916, however, AT&T, already the majority shareholder in Inter-State Telephone, struck a deal to buy the rest of the company. After some legal jockeying, the Illinois Supreme Court approved the takeover, foreshadowing an era when Bell Telephone would control all telecommunications in Illinois.

“[If] both telephones were formerly installed, and both services contracted for, the Interstate (sic) service was simply disconnected, doing away with all duplication,” the Journal reported.

In December 1920, the Chicago Telephone Company bought the Illinois assets of Central Union Telephone, creating a new company, Illinois Bell Telephone. All 13,000 Springfield telephone subscribers then were cut over to the Bell System. The Western Electric Co. supplied telephones, but customers had to lease them from Illinois Bell at a cost of $50 a year (equivalent to $485 in 2020).

The Bell System would predominate in Sangamon County for the next 64 years.

This entry was posted in Business, Communications. Bookmark the permalink.