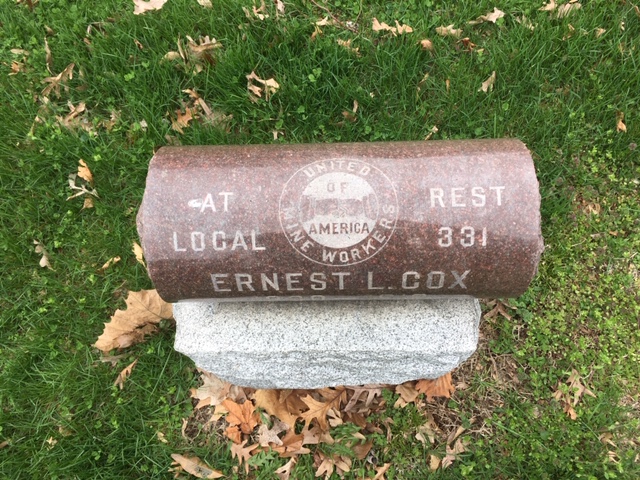 The gravestone of 18-year-old Ernest Cox, one of the victims of the Mine A blast, bears the symbol of Local 331 of the United Mine Workers. (SCHS photo)

Four coal miners were killed Feb. 23, 1918, in the worst coal mine accident in Sangamon County history. Six employees of the mine, Citizens Coal Co.’s Mine A west of Springfield, were charged with negligence and violating mining laws, but it’s not known whether any actually were punished.

The victims died in an explosion caused by a “windy shot,” the Illinois State Register said. Killed were Ray Hiner, 27, night manager of the mine (the blast took place at 4 a.m.); driver Thomas Reilly, 40; and trackmen Ernest Cox, 18, and Walter Whelchel, age not given. Whelchel was from Kalo, Iowa; the others were Springfieldians.

Among the party of miners who located the victims was Ernest Cox’s father, Frederick. (It was common for members of the same family to work together in coal mines at the time.)

The explosives had been planted in the coal seam earlier, but their detonation was delayed when a coal car derailed. Hiner took a party of miners into the shaft to put the car back on its tracks. The Illinois State Register reported what happened next.

After the men had re-railed the car the three charges of powder were lighted. The explosion which followed blew the men with hurricane force against the wall several hundred yards away. …

It was explained yesterday by Robert Reavly, state mine inspector that if a shot stands for a long period after it is placed before it is fired the tamping becomes loose and the blast breaks into the direction where there is the least resistance. Unfortunately the men were in the path where the shot tore loose.

The mule which was taken into the room by the men to pull the derailed car into the main clearing was instantly killed by the explosion. The mule was known as “Jim.”

The shots are usually fired in the evening after the miners leave. When extra shots are fired a signal is required to be given to warn men to keep out of the way. It is said that Hiner gave no signal yesterday as he and the other three men were the only ones present at the time of the firing.

It took 45 minutes for the air to clear enough for other miners to enter the area, according to G.P. Moughan, a mine examiner and president of the United Mine Workers at Mine A, the Register story said.

When we got to a point in the east entry where it turned to the right, we found a young man by the name of Cox who was in a dying condition. His father was one of the four men with us.

The boy was lying with his face downward. I turned him over and his father said, “That’s my son,” and then turned back and left us. In a doorway fifteen or twenty feet from where we were we found a dead mule and then I knew that every one in there was dead.

Following an inquest Feb. 25, a coroner’s jury issued the same verdict in all four deaths. It read:

The victim came to his death February 23 from a fracture of the skull and other injuries received in an explosion in Citizens’ mine A February 23. The explosion as caused by a blowout shot. We the jury believe that this was an improperly placed shot, that the regular shot firer was negligent in not properly reporting these shots. We would censure the management of this mine for failing to have this part of the mine sprinkled at proper intervals and for allowing shots to be fired while men were still in the mine.

Researcher Wayne Hinton included the text of the 1918 Illinois Coal Report’s coverage of the incident on his website, Wayne’s World of History & Genealogy.  Like the inquest verdict, the report suggests a variety of safety violations were to blame:

At the face of the 1st and 2d south entries was found a number of unlawful drill holes which had been fired by the regular shot firers.

All that section in 1st and 2d south off the main east is in an unlawful and dusty condition.

In room No. 3 off No. 1 south offset evidence showed that dust had been unloaded along the track, and it was in this room that the most violent results of the explosion were seen.

The explosion of dust caused by the windy shots, destroyed the slack and dirt stoppings in eight crosscuts, throwing the material to the west. These crosscuts had been built with unlawful material.

The direction of the force of the explosion was north and west.

The south entries were exceedingly dusty and no indications that the roadways had been sprinkled or cleaned for years; the dust and dirt had been placed on each side of the track, and in places it was but a few inches from the roof of the entry.

It is recommended that this company be required to place the mine in a safe and lawful condition by cleaning all the haulage roads of dust and spraying or sprinkling the same with water at once.

Six Mine A employees were arrested a week after the blast. Mine manager John Scattergood was accused of not keeping mine hallways in safe condition; superintendent Henry Martini allegedly allowed miners to be in the mine when the shot was fired; shotfirers John and William Flynn were accused of not posting notices of the numbers of shots to be fired; and miners Israel and Frank Ward were charged with drilling a “dead hole.”

All six posted appearance bonds. After that, however, the case disappears from newspaper records, and the men apparently never went on trial. Martini, at any rate, was still the superintendent of Mine A in August 1918.

Reilly, the oldest of the dead miners, was married with eight children; two sisters also lived in the household. His grave is in Calvary Cemetery in Springfield. Cox and Hiner, both unmarried, are buried in Oak Ridge Cemetery; Whelchel, who was married with two children, is buried in Iowa.

The four were among hundreds of miners who died accidentally in Sangamon County mines in the first third of the 20th century, when the county was home to dozens of coal mines.

This entry was posted in Coal mines and mining, Industry. Bookmark the permalink.