The genesis of Springfield’s Mary Bryant Home for the Blind and Visually Impaired was the meager life savings of a blind woman who understood the need for a safe home.

Mary Bryant, born in Chicago in 1854, lost her sight at age 9 to scrofula, a tubercular infection that sometimes damages the eyes. According to the Mary Bryant Home history, she first appears in records of the Illinois Institution for the Education of the Blind (today’s Illinois School for the Visually Impaired) in Jacksonville fat age 14. The history adds:

Little is known about her life at the school except that in 1869, a fire broke out at the school.  Capable of distinguishing dark from light, Mary was able to evacuate the completely blind students in the school, thus saving many lives.

Mary completed her education and graduated in 1878.  Superintendent Dr. Joshua Rhoads stated, “Mary Bryant graduated with credit to herself and honor to the institution.  She is prepared to teach music and as such, is recommended to the public.”

Bryant returned to work at the state school in 1892 and remained there until her death in 1921. According to the home history:

No photo of Mary Bryant is known to exist, but her pocket watch is on display at the home. (SCHS)

Her salary would never go higher than $10 a month, but she would faithfully put money into her savings account every month.  Mary passed away in the school’s hospital on January 11, 1921, and her ashes were laid to rest in Jacksonville Cemetery.

Mary Bryant’s sympathy and understanding for people less fortunate was understood by all with the reading of her last will and testament shortly after her death.

By living modestly, she managed to save $3,589.83 — the equivalent of $43,770 today.  Mary requested that a safe home for blind women be created with her endowment.

It took 25 years for Bryant’s wishes to be carried out. Alumni of the school for the blind finally raised enough money by 1946 to open the original Mary Bryant Home at 1001 S. Fourth St. The home’s first superintendent was Margaret Howse, assisted by her husband, Frank. Both were blind alumni of the Jacksonville school (they had been students of Bryant), and both had been part of the decades-long fundraising effort. The Howses worked for free for the first nine months the home was open.

“It was pretty tough at the beginning,” Margaret Howse told the State Journal-Register’s Loretta Green in 1976. “We started on practically nothing.” Each of the home’s seven residents (at the time, admission was limited to women) paid $30 a month rent. That gave the Howses $210 monthly to pay for food, utility bills and the salary of a cook, the home’s only paid worker. 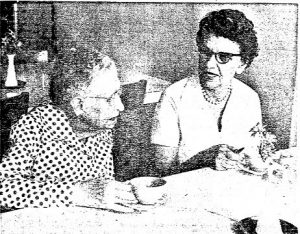 The Fourth Street building couldn’t hold everyone who wanted to live at the Mary Bryant Home, so the facility moved in 1948 to 107 E. Lawrence St. That structure had space for up to 20 residents.

In 1960, the home moved again, to a mansion at 1100 S. Fifth St. that had been built by businessman/philanthropist Col. Henry Davis in 1901. Another fundraising drive paid for the new quarters and for an addition that allowed the home to start accepting male residents.

The Mary Bryant Home has always been funded by a combination of rent payments from its residents, gifts and bequests, and continual fundraising – volunteers held an annual Christmas tree sale to benefit the home for years. Although many residents are supported by various public assistance programs, the home itself has never received any direct government funding.

The current Mary Bryant Home at 2960 Stanton St., purpose-built for people with vision problems, opened in 1983. According to the home’s website:

The staff at the Mary Bryant Home and its Board of Trustees continue to strive towards Mary Bryant’s dream of bringing comfort and safety to its visually impaired residents as they maintain their own independence. 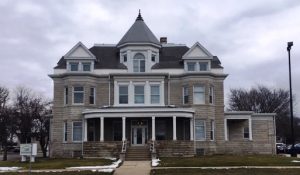 Col. Henry Davis (1849-1929) made his fortune as a farm mortgage broker, “a business,” the Illinois State Journal reported in 1942, “in which he won the reputation of never foreclosing.” His military rank derived from his long service in the Illinois National Guard. Among many other civic roles, Davis for a time headed the board of directors of the Home for the Friendless.

Especially after they moved into their 18-room mansion at Fifth and Allen streets in 1901, Davis and his wife played major roles in Springfield social and political circles, the Journal said.

Colonel Davis, a Democrat, and Mrs. Davis, a staunch Republican, entertained in the splendor which followed the Gay Nineties noted personages of both parties. Governors Altgeld, Yates, Oglesby, Stephenson, Deneen, Lowden and many other noted public officials were their guests.