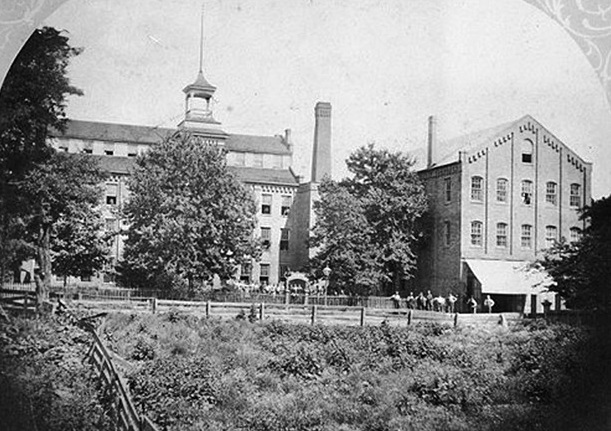 The Springfield Woolen Mills produced woolen cloth and textiles for Central Illinois and consumers around the United States.  The mills operated from 1834 until 1906. For much of that time, the operation was housed in a three-story brick plant on the east side of Fourth Street between Jackson Street and Capitol Avenue, just north of the Executive Mansion. 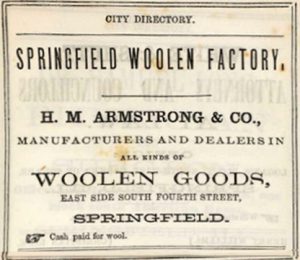 Founded by Hugh M. Armstrong (1809-1902) and his father-in-law John Dryer (1783-1854), the Springfield Woolen Mills began as the Springfield Woolen Factory, a small wool carding operation. Armstrong, a Kentucky native, was a hatter who served in Abraham Lincoln’s company during the Black Hawk War; Dryer, born in Massachusetts, reportedly was the first man to cultivate a nursery and introduce fruit trees in Sangamon County. 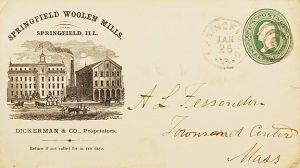 The mills expanded to manufacture cloth in addition to their regular carding operations. By 1865, the factory was producing cassimeres (a light wool), jeans, tweeds, flannels, blankets and stocking yarn.

Armstrong described the mills’ growth in a letter to Henry Street Dickerman (1835-1889), a Connecticut native who was a bookkeeper for the firm and later became the mill’s owner-manager:

At first we run our cards with ox-power, on inclined wheel, but when I added cloth dressing I substituted steam power. After I commenced cloth dressing, my patrons (the farmers) wanted me to add machinery for spinning and weaving, … we built a house sufficiently large to put up one set of machinery for that purpose. … (A)fter a few years, the demand for our goods was such that we were compelled to pull down our old house and build larger; hence the present establishment.

The “larger, present establishment” mentioned by Armstrong was the brick structure built in 1860, which reportedly “covered an area of about ten thousand square feet.”

Dickerman and Edward Thayer bought out Armstrong’s controlling interest when he retired in the mid-1860s, and the corporate name of the firm became Dickerman & Co. 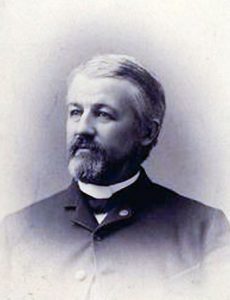 Walter Horace Bradish (1848-1906), a New York native, later bought a share of the mills and served as vice president. Another prominent partner was John Taliaferro Capps (1841-1904), a Civil War veteran who joined the company as a bookkeeper. He became a manager and partner in the 1870s.

In the 1880s, the Springfield Woolen Mills was shipping its products to Boston, New York and a host of cities in the Northwest.

As of the 1881 History of Sangamon County, Illinois (Inter-State Publishing) “one hundred hands are employed in the factory. A capital of over $100,000 is invested in the business, and the monthly product amounts to about $18,000.” 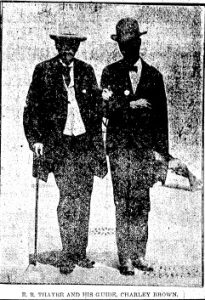 Dickerman, Capps and Bradish had died by the time the mills closed in August 1906. Only Edward Thayer survived.  The closure created a public outcry over the loss of jobs, but keeping the mills open was a financial risk, and the remnants were sold off.

Not long after the mills shut down, C.R. Talbott Automobile and Buggy Repository moved a garage into part of the site.  The Illinois Secretary of State dissolved the Springfield Woolen Mills corporation in January 1910.

The former mill building remained standing until 1940, and Alfred Booth’s garage occupied the structure for many of its last 35 years. The site’s owner, J.E. Hemmick, finally had the building torn down to make way for a Nash auto dealership.

Hemmick wrote a short history of the structure that was published in the Nov. 28, 1940, Illinois State Journal. He wrote:

Mr. Thayer built the recently razed woolen mills building in 1857. It stood for eighty-three years. It was built to last for many years, since we found in demolishing the structure at least twelve timbers more than forty feet long, some of them measuring 12 by 12 and others 14 by 14 inches.

At Mr. Thayer’s death in 1912, when the woolen mills passed out of existence, it was estimated that more than $5,000,000 has been paid out in wages during its seventy-five years of activity. …

With the completion of my plans for a new building on the site, there passes one of Springfield’s oldest landmarks. Taking its place, however, is an aggressive business which I wish every success and I am confident the public shares my hopes.