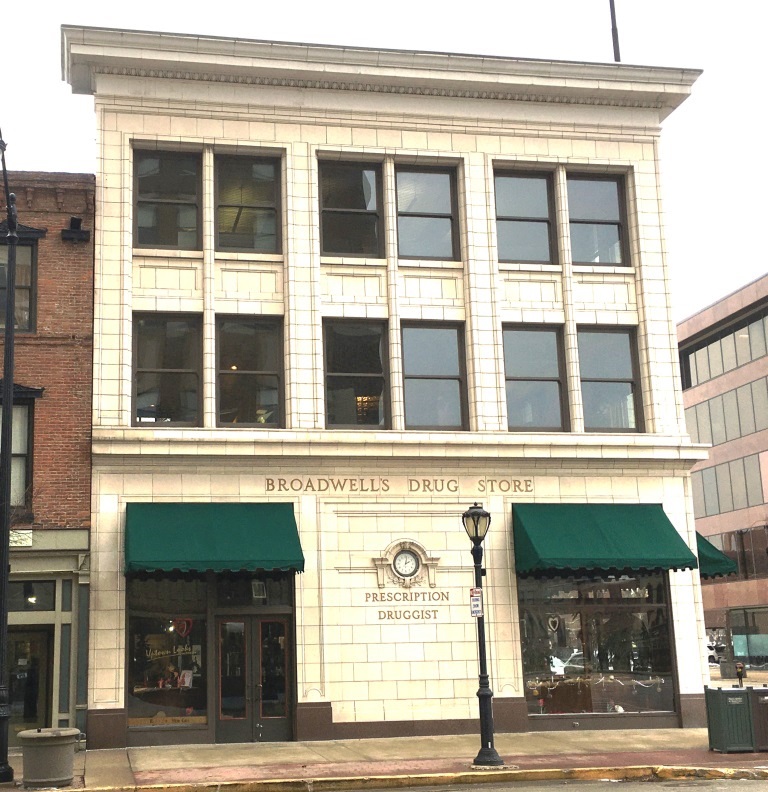 This entry has been edited to correct information in a photo caption.

The building on the northwest corner of Fifth and Washington streets in Springfield was a drugstore for about 125 years. While that tradition ended in 1981, the old terra cotta building, which still bears the name “Broadwell’s Drug Store – Prescription Druggist” on its façade, remains a symbol of an era when downtown Springfield bustled.

The last owners of Broadwell’s Drug Store were two Chicago-based architects, Donald Powell and Robert Kleinschmidt. Along with a group of local investors, Powell and Kleinschmidt bought the building in 1978, restored it and tried to keep it in business as a pharmacy. Their endeavor failed, however, and by 2020, the former pharmacy space housed a hair salon.

Powell and Kleinschmidt were part of the Skidmore, Owings and Merrill (SOM) design team that created the Illinois National Bank Center in the early 1970s. The pair became intrigued with the old Broadwell building across Fifth Street from the bank and decided to try to bring it back “to its splendor,” according to newspaper reports at the time.

Powell said the building was a significant example of “a design which was prevalent in the Midwest and in smaller cities.”

The ground floor, where the drug store operated, was restored to its early 20th century look, while the upper floors were built out as modern office space. In the process, Powell and Kleinschmidt found the store had much to offer in the way of hidden architectural features. 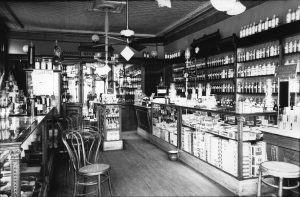 Interior of the first Broadwell’s building, 1914. Joseph Fosselman had it constructed in the 1860s; Stuart Broadwell built his new drug store in 1916. (Sangamon Valley Collection)

All the original woodwork was solid mahogany from Honduras. Near the entrance, an image of a mortar and pestle, in expertly laid foot tile, reappeared after years of being lost to grit and grime. The terra cotta exterior was cleaned to bring back its bygone luster.

Powell and Kleinschmidt left SOM in 1976 and established their own firm, Powell/Kleinschmidt Inc. Broadwell’s was one of its first endeavors. At the time, Powell commented that the building, while in decent structural condition, had never been restored. One reason was that it had been in continual use for 60-plus years at that point.

The architects commuted back and forth from Chicago to Springfield for more than a year. The renovated Broadwell’s – polished, oiled and shining – reopened in November 1979.

Prior to becoming the site of a pharmacy, the northwest corner of Fifth and Washington was occupied by a grocery store, Clarkson Freeman & Co. Freeman sold the business in 1858 to Joseph B. Fosselman (1830-95), a native of Pennsylvania, who erected a brick “drug and fancy store” on the corner. Fosselman arrived in Springfield during the 1850s and worked as a pharmacist for about 10 years before entering the wholesale grocery trade. 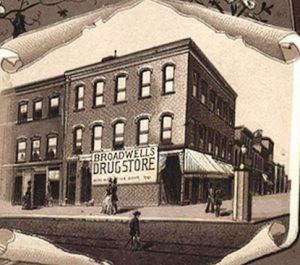 Fosselman sold the corner store to Dr. Samuel H. Melvin (1829-98), who operated an apothecary there until the 1870s. Melvin was the president of the Springfield and St. Louis Railroad and also president of the Home for the Friendless from 1862 to 1874. Melvin lost much of his income in the Panic of 1873 and left Springfield. He died in Oakland, Calif.

After Melvin’s ownership, the store changed hands several times. It was known as the Old Corner Drug Store when Stuart Broadwell (1867-1928) purchased it from Dr. Frank Fleury in August 1888.  Broadwell apparently entered the pharmacy business as a clerk for J.B. Adelsberger, whose drug store was at 331 S. Fifth St. in the 1880s.

Broadwell’s occupied Fosselman’s 1860s structure until 1916, when he had a new store built.  The 1916 building, the one recognized today as Broadwell’s, was designed by George H. Helmle and was hailed as “one of the most modern in Central Illinois.” The new Broadwell’s had an open floor plan and lots of windows to provide light, fresh air and room for merchandise display.

The upper floors were used as additional commercial space. There was a barbershop onsite, too. The building was clad in white terra cotta tile, a popular look for commercial structures at the time.

The new building became a busy place, and the area around it was endearingly called “Broadwell’s corner.”

Stuart Broadwell was the son of Nancy Iles (the daughter of Sangamon County pioneers) and Norman M. Broadwell, a lawyer, Sangamon County judge and two-term mayor of Springfield. In addition to his pharmacy duties, Stuart was a director of the First National Bank, served as a Democratic county supervisor and was a member of the Springfield School Board. He married Olive Latham in 1890.

During World War I, Broadwell was part of “Unit W,” a medical unit formed privately in Springfield by Dr. Daniel Ottis. The unit was federalized and deployed to Great Britain, but Broadwell reportedly did not travel to Europe with it.

After Stuart Broadwell died in 1928, his son Norman operated the store until 1961. Guglielmo “William” Vespa, an Italian immigrant, bought the business in the 1960s, although Norman Broadwell retained ownership of the building. The store kept the Broadwell name during Vespa’s tenure, which ended in the late 1970s. Pharmacists Charles Vespa (William’s son) and Roger Schnelten ran Broadwell’s thereafter. 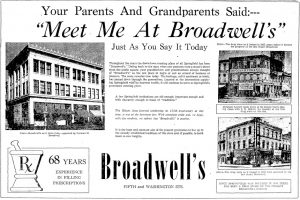 The Powell/Kleinschmidt renovation brought the old store back to its original 1910s aesthetic. During this period, the building also housed the Blue Parrot vintage clothing store and a music shop called the Pickin Parlor.  However, the combination wasn’t enough to save Broadwell’s, as local storeowners were hurt by downtown’s decline and the national recession of the 1970s and early ‘80s.

Dan Cronin, business writer for the State Journal-Register, reported on the demise of Broadwell’s in 1981. “(T)he store has consistently lost money since it reopened,” Powell and Kleinschmidt told Cronin. The pharmaceutical inventory was purchased by a local pharmacy, and cosmetics, gifts and other items were sold to the public at half off.

In 1982, the building was sold to Springfield architect Carl Fischer, and the upper floors became the offices of Carl Fischer Associates, Inc. With the later addition of August Wisnosky as partner, the firm became Fischer-Wisnosky Architects Inc.

Over the years, the Broadwell’s building has seen a variety of retail establishments open and close within its historic space. But thanks to the restoration work of Donald Powell and Robert Kleinschmidt, the Broadwell’s Drug Store building remains a downtown icon.