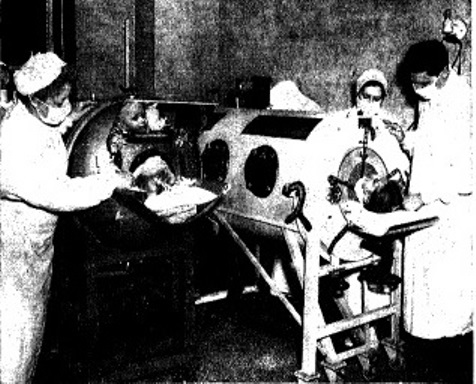 Nurses and a physician crowd around two young polio victims in respirators (“iron lungs”) at St. John’s Hospital in September 1949. One girl was 20 months old, the other 7 years of age. (Courtesy State Journal-Register)

In July 1949, with a polio epidemic under way, Springfield officials ordered children under 16 years old into quarantine – confined, with few exceptions, to their own backyards. Hours later, 4-year-old Thomas Suttle died of polio.

The boy was the third person in 10 days in Springfield to succumb to the disease. By the time the 1949 polio “season” ended (polio was most likely to appear in summer and early fall), the city would report 88 cases of the disease and 11 deaths.

Poliomyelitis is caused by a virus transmitted through contact with an infected person’s feces or mucus. Most people with polio show few, if any, symptoms, but they can still pass the virus on to others. In its severe forms, polio causes paralysis and sometimes death.

Children are among those most susceptible to polio – it was often known as “infantile paralysis” in the 1940s and ‘50s – a characteristic that made polio perhaps the most feared disease of the mid-20th century. Creation of vaccines in the 1950s, however, has virtually wiped out polio in the U.S. and the rest of the developed world.

The children’s quarantine edict was issued by Dr. J.H. Shamel, city superintendent of health, “because the incidence of polio in this community has reached theoretical epidemic proportion.” …

Police Chief William Williams announced last night he ordered all policemen to enforce rigidly the quarantine and to see that no tickets to theaters were sold to any children 16, or under, with or without their parents. The enforcement order applies to keeping children away from all public parks, pools and gathering places, he said.

Shamel’s order contained only a couple of exceptions: children could be out in public to “engage in necessary gainful work” and to go to necessary appointments, accompanied by their parents. Children also could ride in  the family car with their parents “as long as no stops are made and no attempt is made to visit or be with other persons.”

When the quarantine began, St. John’s Hospital’s communicable disease ward held 47 polio patients, including many from out of town – St. John’s was one of two regional polio centers downstate – and had room for only eight more, Shamel said. 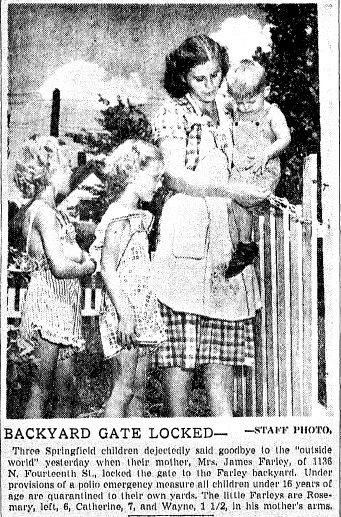 As the newspaper caption says, Mrs. James Farley locked the gate to the family’s backyard as the polio quarantine went into effect. (Courtesy SJ-R)

“The quarantine here will bring practically all youth activities to a standstill,” the Journal reported.  Swimming pools and playgrounds were closed, Boy Scout and Girl Scout camps shut down, and the Soap Box Derby was scrapped for the duration. Sunday schools, picnics, band concerts, ice cream socials and dances were abruptly called off.

“Children will be barred from church attendance, summer school, the state fair and the K. of C. (Knights of Columbus) barbecue,” the newspaper said.

Attendance at the 1949 Illinois State Fair dropped 30 to 50 percent because of Springfield’s quarantine and public fear of polio in general, the Journal reported in the middle of the fair Aug. 17. But the fairgrounds was in a peculiar legal situation. The quarantine barred Springfield children from attending, but the fairgrounds was outside city limits, so children from elsewhere were allowed to visit the fair – if they and their parents dared. The Journal’s Aug. 17 update led off with a photo of Gov. Adlai Stevenson accepting a basket of “the finest peaches in the state” from the Southern Illinois Peach Queens of both 1948 and 1949. Both queens were 16 years old.

Aside from the quarantine, city officials focused their polio prevention efforts on cleaning up garbage and sewage and on fly prevention. At least five people were arrested for health violations in connection with allowing rubbish to pile up. To kill flies, city Health and Safety Com. George Doyle considered a plan to fog the city with DDT from an airplane. He finally settled for having spray crews roam the city in trucks.

The fairgrounds was “swamped” with chlordane and lindane before the fair opened, according to a Journal editorial.

Polio researchers later determined that fly extermination had almost no impact on the spread of polio. Neither did most garbage cleanups. However, Doyle’s department also tried to eliminate “unscreened, ill-kept outhouses (and) open sewer overflows.” To the extent those steps reduced human exposure to fecal material, those were useful measures.

The quarantine was called off Aug. 24, in time for school registration.

“When the quarantine was invoked the city had 16 cases of polio and listed two dead from the disease,” the Journal reported. “When restrictions were lifted last night, there were 58 cases and had been 10 deaths.”

While the worst of the epidemic was over by Aug. 24, many of its victims faced long, excruciating bouts of therapy.

The Journal’s talented feature writer, Beulah Gordon, described conditions in St. John’s polio ward in a September 1949 article. There was a scattering of ill adults on the ward, but children, one of them only six months old, made up the bulk of the patients.

Almost all the children are paralyzed. They cannot feed themselves or hold a picture book. Those who can talk make frequent requests as “Move my leg.” “Move my arm.”

Helpless and homesick in a strange new world, they need constant care and reassurance.

Some children can scarcely breathe. They are placed in iron lungs (St. John’s had three – ed.). Out at St. John’s a fair haired little 20-month-old girl has lain in an iron lung for more than 10 days. After the first week, the sisters tell you proudly, she was well enough to stay out three minutes at a time. ….

After the crisis passes, some of the hardest work is needed. The children and the scattering of adults … lie with stiffened arms, legs or backs. All but the babies begin to wonder about recovery…. A few, including a three-year-old and a five-year-old, lie quietly, unable to move, their backs arched and paralyzed.

A “little, blue-eyed boy of 3” who had been hospitalized since July was ready to transfer to St. John’s Crippled Children’s Hospital, on the campus of St. John’s tuberculosis sanitarium near Riverton. There, with financing from the National Foundation for Infantile Paralysis, he would learn to cope with losing the use of one of his legs, Gordon wrote.

Both Shamel and Doyle pronounced the quarantine a success.

Incidence of polio was largely confined to east and southeast Springfield, Shamel said. “The few isolated cases occurring outside this area have not produced additional spread of the disease, presumably due to the avoidance of exposing other children,” he said.

During the quarantine, Doyle said, his inspectors uncovered improper sewage disposal, outside toilets and numerous health menaces in the worst affected areas of the city. Inspectors were headed next for the far southeast corner of Springfield, he said. “Premises will be condemned whenever it is deemed necessary,” Doyle said. 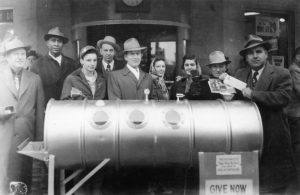 Fundraising for polio eradication and treatment continued well after 1949. Here, a group of fundraisers displays a new iron lung in front of the Thrifty Drugs at Fifth and Monroe streets in 1952. (Sangamon Valley Collection)

Beyond city government, private fundraising efforts – the March of Dimes and other fund drives, auctions, dances, and many other events – raised more than $100,000 during 1949. The local chapter of the National Foundation for Infantile Paralysis, however, reported expenses of more than $122,000. The foundation paid all expenses for a polio victim as long as treatment showed progress.

Polio was a cyclical disease. In 1950, Springfield reported only 24 cases and one death from polio. Similar figures were reported during the next few years.

Finally, in 1955, Dr. Jonas Salk’s injectable polio vaccine went into widespread use. In Sangamon County, the first doses were given on Monday, April 25, 1955, to 1,100 first- and second-graders at eight schools throughout the county. The program continued the rest of the week, eventually making the vaccine available at no cost to every first- and second-grade student in the county. A second round of “booster” shots was scheduled for a month later.

Older children and adults had to arrange to get polio shots at doctors’ offices at their own cost.