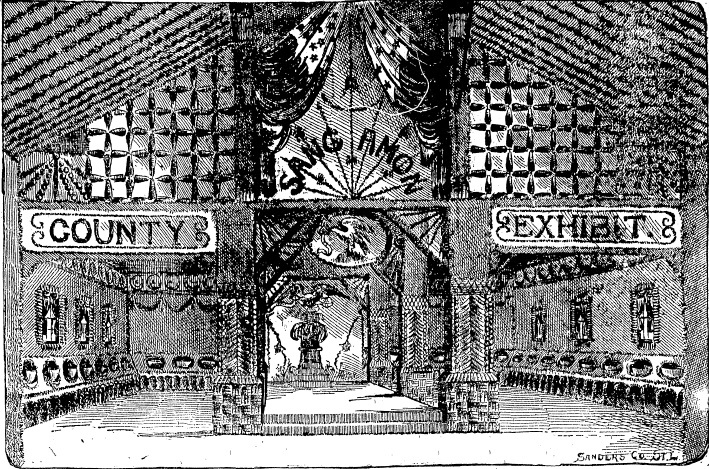 Sangamon County’s display at the 1894 state fair, the first whose permanent home was in Springfield, was made entirely of products from the county. The eagle was sculpted of corn, both shelled and on the cob, with feathers of wheat and eyes of rice and popcorn. The roof used oats displayed on blue cloth, the main pillars were corn and wheat, and the platforms rested on pillars of Sangamon County coal and tile. (Courtesy State Journal-Register)

An unelected board designated Springfield as the permanent site of the Illinois State Fair in 1894, after lawmakers spent 15 years proving they couldn’t do the job.

From 1853, when the first state fair was held in Springfield, the show moved regularly around the state – 12 cities (see below) ended up hosting the fair between 1853 and 1894. In an 1879 editorial, the Illinois State Register compared that practice to a traveling circus.

That the circus system … has finally worked out its own destruction is a fact within the knowledge of every intelligent person in the state. It was adopted years ago, when railroads were few, and when, as the larger part of the people of the state could not visit the state fair, the fair was obliged to change its location from year to year and visit the people. But now that the state is gridironed with railroads, the location of the fair at any central point on the great through lines will render it accessible to more people than did its location at any point in the state twenty years ago. …

It is not clear why anyone connected with the agricultural department should be still in favor of retaining a practice so antiquated, stupid and expensive.

Agreeing, the Illinois House twice voted to designate a permanent site for the fair; Springfield was the House’s pick in 1887, while Peoria got the House’s nod in 1893. In both cases, however, legislators representing the losing cities blocked the House bills in the Senate.

The Illinois State Board of Agriculture put on the fair, including selecting the various locations, but the board took the position for years that only the legislature had the authority to select a permanent location. The fair originally moved from town to town every year. Recognizing the inconvenience and expense of putting on a fair, however, the board eventually started to select sites for multiple years – two years at a time at first and finally four.

In 1893, however, officials had the luxury of an extra year to consider a permanent site. The Illinois State Fair was canceled that year in deference to the Chicago World’s Fair. So when Peoria’s bid to be the fair’s permanent home failed in the state Senate in June 1893, the Board of Agriculture finally decided to take the initiative itself.

Armed with Illinois Attorney General Maurice Moloney’s ruling that the board could determine a permanent location for the state fair, the board accepted proposals from interested cities. The four final contenders were McLean County (Bloomington), Peoria, Decatur and Springfield.

The specifications the board published in October 1893 might as well have been written for Springfield. They required a 100-acre fairgrounds with water, electric power and easy transportation access. All four cities pledged to meet the standards, but only Springfield had a facility ready for use: the 155-acre Sangamon County Fairgrounds north of the city. (The fairgrounds was expanded to 366 acres in 1924.)

Ballot-by-ballot vote tallies from the Illinois State Board of Agriculture, Jan. 11, 1894 (SJ-R)

Members of the Board of Agriculture visited all four communities, then gathered in Springfield Jan. 11, 1894, to make a decision. Springfield led from the first ballot, but it took eight rounds of voting before the city got the final nod, with 11 votes. Runners-up were Peoria and Bloomington, 3 each; Chicago (which hadn’t submitted a bid), 2; Decatur, 1; and “no location,” 1.

The first state fair at its new permanent home was held Sept. 24-30, 1894. The Illinois State Register previewed its attractions on page 1 of its Sunday, Sept. 23, edition.

The features of this fair are varied. Coupe’s celebrated Midway Plaisance rivals the glories of Pain’s “Last Days and Fall of Pompeii;” the trick horses, ponies and dogs will do honor with the races of the charioteers, and the littl peole from Dahomy, Samoa and the Fijee Islands will divide honors with the others from other foreign buildings on the grounds.

The beautiful lake, the animals and attractions of many kinds will provide entertainment that has never been seen outside the gates at Jackson park, where last year was located the famous and never-to-be-forgotten World’s Columbian exposition.

The greatest of all attractions at the grounds here is the beautiful exposition building (which was built explicitly for the 1894 fair – ed).

“Every citizen of Springfield should attend the fair as often as possible. Give the permanent fair a grand sendoff by making its first exposition a magnificent success.”

Here is a list of state fair locations in the decades before it was permanently moved to Springfield.