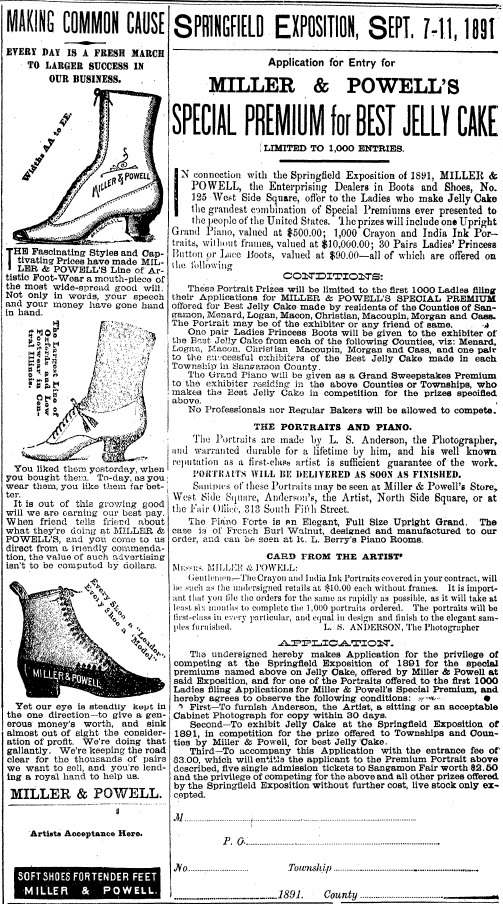 When Springfield shoe merchants J.F. Miller and P.P. Powell offered a grand piano as top prize in the jelly-cake bakeoff at the Sangamon Fair and Springfield Exposition in 1891, they expected a bushel of free publicity. They got more than they bargained for: a national debate over the definition of a jelly cake.

More importantly, perhaps, Miller, Powell and all of the fair’s Springfield supporters got an early boost in the statewide competition to choose a permanent home for the Illinois State Fair.

Miller & Powell’s shoe store was on the west side of the Springfield square. In addition to the piano – a $500 full-size upright grand from R.L. Berry’s Piano Rooms in Springfield – the shoe partners promised that the first 1,000 jelly cake cooks all would receive crayon portraits done by local photographer L.S. Anderson. What’s more, the best jelly-cake bakers from each of seven area counties would receive a free pair of “Ladies Princess Boots, Button or Lace,” as would the top jelly-cake cooks from every township in Sangamon County.

At full retail, the value of Miller & Powell’s special premiums came to more than $10,000. That was far more than the publicity could have been worth, considering that Ladies Princess Boots, for instance, sold for $3 a pair. The year before, Miller & Powell’s contribution to fair premiums was only $75. 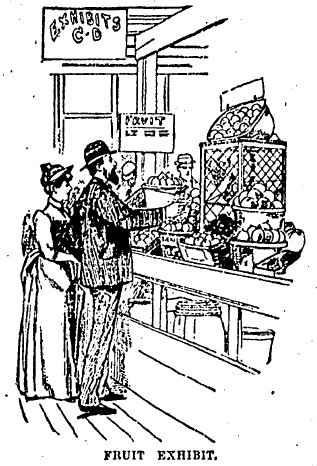 The Illinois State Journal depicted scenes from the fair , possibly from stock images. At any rate, the paper did not illustrate the jelly-cake pyramid (SJ-R)

Six hundred to 700 bakers entered jelly cakes at the fair, more entries than in any other contest at the fair. The value of the prizes and the number of entrants also may have suggested to state officials that central Illinoisans would enthusiastically support the state fair if Springfield was chosen as its permanent site.

The Illinois State Journal reported on the contest:

No better illustration of the liberality and public spirit of Springfield merchants toward the Sangamon county fair and exposition is afforded than that of Miller & Powell, whose almost prodigal awards for the best jelly cake were made in the ‘annex’ to the exposition hall yesterday.

As a result, over 700 ladies entered the contest, and the result of their work can be seen by a visit to the center of the north wing of the annex to the exposition hall. It consists of a pyramid of the most tempting jelly cakes arranged on shelves several feet high.

Neither the Springfield Exposition nor the contest sponsors spelled out in advance exactly what constituted a “jelly cake.” Apparently, they figured everybody understood it was a cake whose layers were separated by layers of jelly.

Someone, however, cried foul when the winning entry, baked by Clara Willett (1865-1931) of Springfield, turned out to be an angel-food cake interspersed with layers of crab-apple jelly. Traditional cooks, the protestor or protestors said, used pound cake, not angel food, as the basis for their jelly cakes.

Willett’s position, the Journal said, was:

(T)hat a jelly cake is a jelly cake, whether the layers be cup cake, sponge cake or angel’s food cake, which Is a very light and white sponge cake made without the yolks of the eggs. The best cake, in the estimation of the committee, was made of layers of this tempting culinary compound and put together with alternate courses of jelly, similar to the manner in which a bricklayer puts up a wall, using mortar to hold the rows of bricks. 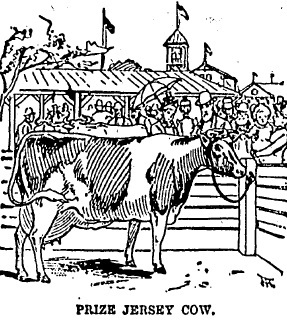 The resulting question, “What Is a jelly cake?”, was milked of every possible drop of publicity. Journalists rummaged through cookbooks, but came up with no clear answer. Illinois Attorney General George Hunt declined to issue a ruling. Plans were made to convene a “Congress of Cooks” in Springfield to end the dispute (it never came to pass). Newspapers in Chicago, St. Louis, and New York, among others, took note of the debate.

According to one Journal article:

One lady rushed into the Fair office yesterday morning and exclaimed: “I am sure the committee is right. I have telegraphed to New York asking Delmonico (a famous restaurant of the time – ed.) if a cake like that made by Mrs. Willett is really a jelly cake and the reply I get is ‘yes.’ That settles it in my opinion.”

Willett’s victory eventually was upheld more or less by default – the committee of judges had made its decision, and no agency, including the fair’s managers, had the power to overturn the ruling.

The piano arrived at the Willett residence on Springfield’s west side in October 1891, a month after the fair. To celebrate the occasion, Clara and Samuel Willett threw an “angel food jelly cake tea.” Clara Willett played her new piano, and invitees got a chance to taste both traditional and angel-food jelly cakes.

“The unanimous decision,” the Journal reported, was that Willett’s 1891 version was “as near perfection in jelly cake as it was possible to arrive at, and for real genuine, delicious eating could not be beaten.”

It’s not clear today that the jelly cake controversy was genuine – no protestors were identified in any of the 1891 newspaper coverage, and none were quoted.

But the debate, legitimate or not, no doubt helped keep Springfield in the minds of members of the Illinois Board of Agriculture, which was beginning to consider the need for a permanent home for the state fair. Despite serious competition from Bloomington and Peoria, the board voted on Jan. 11, 1894, to make Springfield the fair’s permanent site.