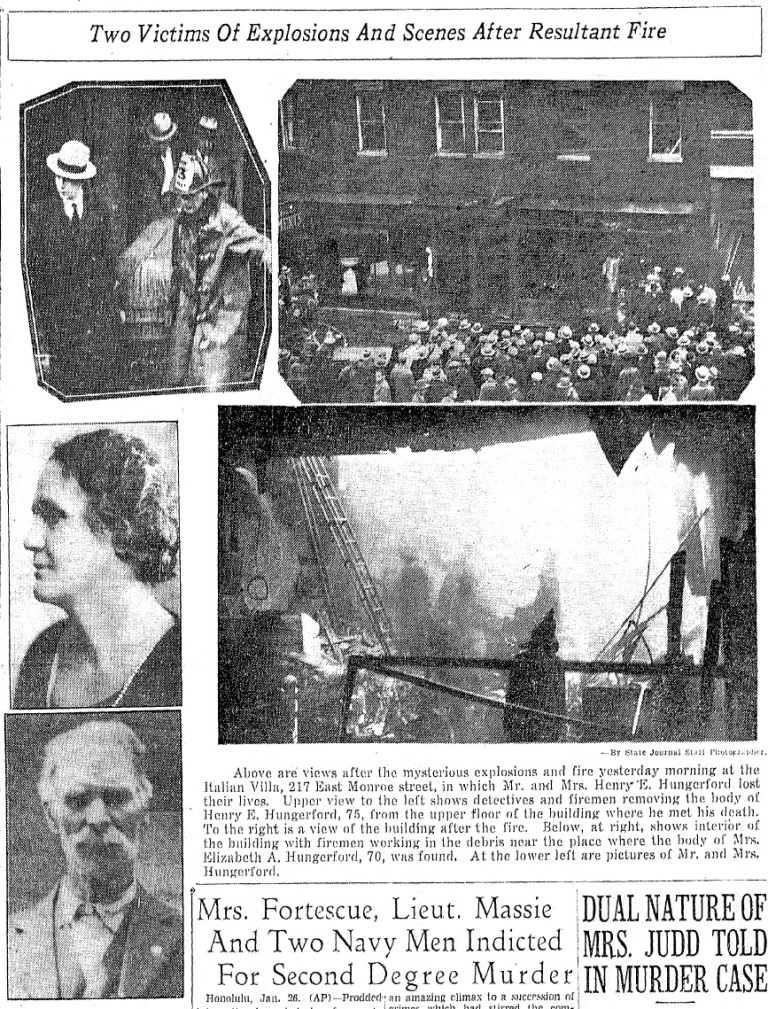 The explosion that wrecked the Italian Villa nightclub on East Monroe Street in 1932, killing two, was never explained.

Suspicion, fueled by testimony from passersby, the track records of the club’s owners, and a rash of explosions around central Illinois at the time, was that the destruction of the Villa was crime-related. But investigators quickly ruled out natural gas, gasoline and dynamite as causes for the blast. No one ever determined whether the explosion was intentional or accidental.

The couple who died, Henry Hungerford, 74, and his wife Ava, 70, lived in a second-floor apartment. The Hungerfords, the parents of eight, had lived in Curran most of their lives. They moved to Springfield about 1927. After five years at First and Allen streets, the Hungerfords rented the apartment at 217 E. Monroe only two weeks before they were killed.

Five other tenants escaped from the building, which was owned by local investor Edward W. Payne.

Over the next several weeks, investigators said evidence ruled out the most likely causes of the explosions. If the blasts had been caused by natural gas, meter readings should have showed a sharp increase in gas consumption; they didn’t. Dynamite or black powder would have knocked down the east or west walls, or both; they still stood. Gasoline ignition should have left some residue; there was none.

As a result, the probe focused more on statements from witnesses who said they had seen a man or men near the Villa shortly before the first blast. But the witnesses’ statements conflicted – one, two or three men were said to have approached the building, depending on who was making the statement.

In March, the Illinois State Journal reported that circumstantial evidence, “believed sufficient to warrant an indictment,” was about to be presented to a Sangamon County grand jury. If that happened, however, the grand jury never returned any indictments. A coroner’s jury in May declared the explosions and fire of “incendiary origin,” meaning arson. That decision, however, was based largely on a statement from a witness who had already died (of natural causes), and the investigation of the fire went no further.

The Italian Villa, which the Journal described as a “dine-and-dance establishment,” was operated by Paul Termine (1906-69) and his stepfather, Salvatore “Sam” Vizzini (1891-1948). Vizzini managed several bars and clubs over the years. In 1923, he had been convicted of illegal liquor sales after a raid on his “soft drink parlor” at 114 N. Sixth St., the Journal said.

(Federal) officers allege they found three bottles of whisky under the counter in a specially prepared case which with the pull of a string would drop the bottles ten feet to the basement. When the string was pulled, members of the raiding squad said, two of the bottles were smashed into bits but the third remained unbroken and was confiscated by the raiding party.

The home of Sam and Carmella Vizzini (Carmella was Termine’s mother) at 1114 E. Carpenter St. also had been destroyed by an explosion and fire in February 1930, but nothing in newspaper records indicates the origin of that blast was suspicious. In its first story on the Italian Villa explosions, however, the Journal reported:

Multiple explosions and arson fires  had also rattled authorities in Lincoln and Bloomington in early 1932, the Journal said in its story speculating on an Italian Villa indictment. “Nearly a million dollars in property was destroyed in this section of the state by fires within a month,” the paper reported. 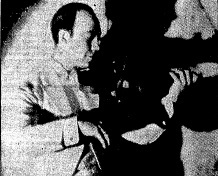 In addition to managing the Italian Villa, Paul Termine was a talented violinist and band leader. He had no criminal record – except for one odd incident 10 months before the Italian Villa fire.

Termine and his wife Goldie, along with Vizzini and a woman named Helen Varcelona (also known as Helen Mitchell) of Chicago, were arrested about midnight March 7, 1931, at Sixth and Madison streets, near both the Springfield city jail and one of Vizzini’s businesses, the Italian Importing Co. The group, arresting officers believed, intended to break into the jail.

Varcelona/Mitchell, according to the Journal’s accounts of the arrests, was the sister-in-law of Ted Patterson, one of four men arrested on Nov. 26, 1930, for the Bonnie-and-Clyde-style robbery of the Rochester State Bank.

The arresting officers said they found two revolvers in Vizzini’s car, and they suspected the Vizzini group intended to slip the weapons to two of the bank robbery suspects, Patterson and Archie Brown, who were being held in the jail. 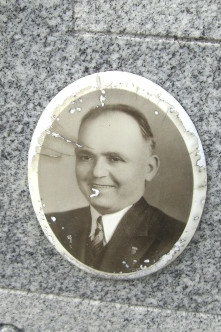 Sam and Carmella Vizzini already had pledged their house and other property to bail a third alleged robber, Jack McCoy, out of jail. The Journal added that police believed Vizzini’s importing company had been the bandits’ pre-robbery headquarters.

When the officers turned the spot light on the machine, Termaine (sic) and Miss Varcelona were seen standing at a rear door of the jail that leads into the prison kitchen, police reported.

Termaine, the officers in the squad car declare, was trying the door. As soon as the light was flashed on the car, Termaine and Miss Varcelona hurried into the parked machine, officers say.

The group was arrested less than a block away. The guns were found in a subsequent search.

However, charges were dropped against the group six weeks later. The Journal reported the dismissals in a three-paragraph story that gave no explanation for authorities’ change of heart.

Vizzini and Termine resumed their careers following the Italian Villa Fire. Vizzini opened another club, the Coconut Grove, “the largest open air beer garden in central Illinois,” at 230 N. Sixth St. He held leadership posts in local Italian-American groups and was a Democratic precinct committeeman. When he died, Vizzini was a clerk in the secretary of state’s office.

Termine went back to his music, fronting a variety of combos and big bands over the years. He performed regularly in clubs, for dances and at other venues in Springfield for more than two decades. He gave up professional music in the 1950s to become an insurance broker.