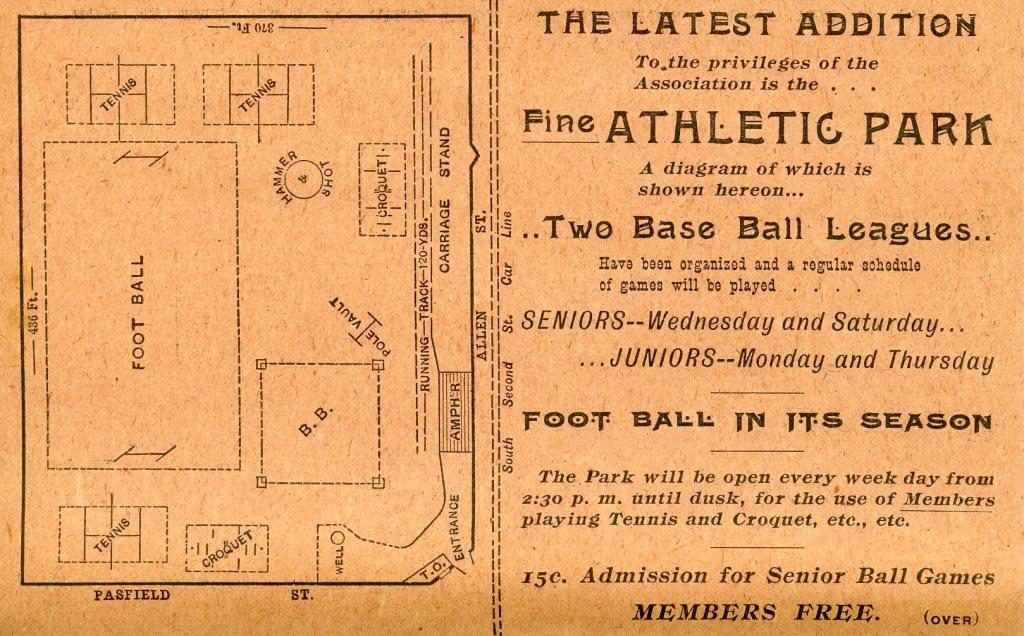 For a brief period in the 1890s, the Springfield Young Men’s Christian Association maintained what it called an athletic park. The park was on 10 acres leased by the YMCA at the southwest corner of Pasfield and Allen streets. A street car line ran past its gate.

The site boasted a football field, a baseball diamond, croquet grounds, lawn tennis courts, and fixtures for track and field events. A 500-seat amphitheater and a carriage stand allowed spectators a view of the diamond and track.

The park opened on June 1, 1895 with a baseball game between teams from Springfield and Decatur; the home team won.

In general, baseball was the choice event at the park. The YMCA had a league of its own with four teams. The athletic park’s baseball diamond also hosted games against teams from other towns and matches to benefit charities. One game in 1895 matched two teams made up of YMCA members – the Fats vs. the Leans, presumably describing players’ body styles; proceeds went to the Home for the Friendless, an orphanage, and the Home for Aged Women.

Another game matched local lawyers against Springfield preachers. That match, which one newspaper suggested be titled the Sinners against the Saints, ended with the preachers prevailing, 11-10.

In 1896, the YMCA reported that two track and field days were held at the park, as well as 26 games of baseball and seven football games.

The athletic park continued to be used at least through the summer of 1898, after which problems with the land’s lease caused the YMCA to abandon the park. City directories suggest single-family homes were built on the block shortly after the turn of the century. 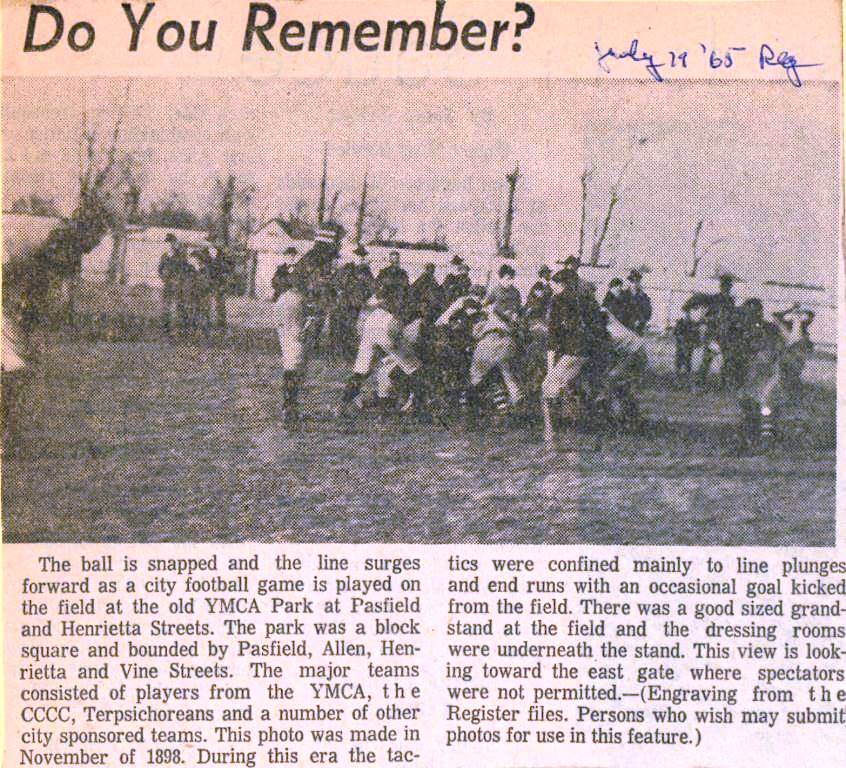 The photograph above, published as an Illinois State Register “Do You Remember” feature in 1965, purportedly shows a football game under way at the YMCA Athletic Park in November 1898. The original photo apparently doesn’t exist, leaving only the somewhat degraded newspaper clipping. The name of the photographer is unknown.

Some parts of the photo back up the description given in 1965, but the evidence isn’t conclusive.

On the plus side, the park is known to have been surrounded by an eight-foot-high fence, and the photo does show a tall wooden fence in the background. Other descriptions of the park’s facilities are generally consistent with what’s shown in the photo. Spectators’ clothes, as much as can be determined from the grainy reproduction, also seem appropriate for 1898.

However, the 1965 caption says the photo was taken in November 1898; the YMCA Athletic Park is thought to have closed by then. What’s more, the caption says the original photo came from “Register files.” But no such photo appeared in the newspaper in 1898; in fact, Springfield newspapers apparently didn’t publish actual photos (“halftones,” which differentiate between shades of gray) until 1900 or later. Up till then, newspaper illustrations were engravings that reproduced only pure black and pure white. In addition, action sports photos were rare, because most camera shutters were too slow to capture movement.

On the other hand, handheld Kodak cameras were being sold in Springfield by the early 1890s. And it’s even possible that the photographer staged his picture, persuading the players and spectators to appear to be moving when they were actually standing still.

Even if the 1965 description is wrong in some details, the photo has historic value as apparently being one of the earliest images of any athletic event in Springfield.

The Y created another sports facility in about 1902 at Amos and Washington streets. Newspaper stories and city directories don’t give any better location for that park, or any description of its facilities either. The only detail known is that the field was used for both baseball and football.

The second YMCA park was most heavily used from 1902 to 1907, but Springfield High School played several football games at YMCA park in 1910. At least one football game was held at what the Illinois State Register called “the old Y.M.C.A. park” in 1911. 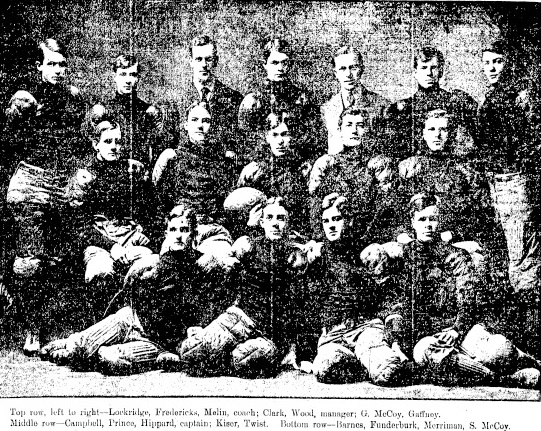 The biggest game ever played at the park took place on Nov. 29, 1906, when SHS took on Chicago’s Wendell Phillips High School in football. Organizers had to build bleachers solely for that game, which the Illinois State Journal said attracted more than 1,500 spectators.

SHS had a tough squad, one that had lost only one game and had been scored on only twice all season, but Phillips won the game 11-5.

SHS halfback John Merriman was pushed over the goal line for Springfield’s only touchdown. (Under football rules at the time, touchdowns were worth 5 points.)

“With the entire Springfield team at his back, Merriman was sent over the line for the first touchdown after only six and one-half minutes of play,” the Illinois State Journal reported. “Merriman failed at an easy try for goal (point after).”

Phillips, however, answered with two touchdowns and an extra point, all in the first half. The two teams exchanged punts for the entire second half.

This entry was posted in Amusements, Parks, Sports and recreation. Bookmark the permalink.