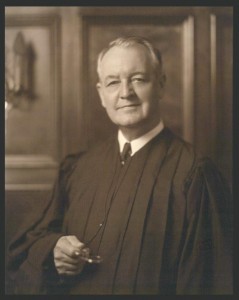 Judge Lawrence E. Stone (1875-1946) served as a Sangamon County circuit judge and then an appellate judge from 1932 until his death.

At his death, he was thought to hold the record for having his circuit-court decisions upheld by higher courts. More than 100 of his rulings were appealed to the Illinois appellate and supreme courts, and 90 percent of them were affirmed.

Stone, born in DeWitt County, began his law career in Clinton, but moved to Springfield in 1914. He was appointed a circuit judge in Sangamon County in 1932 and elected to the post in 1933. The state Supreme Court later named him to the First District Appellate Court.

Stone also was a delegate to the 1940 Democratic National Convention from Illinois. He is buried in Oak Ridge Cemetery.

This entry was posted in Prominent figures. Bookmark the permalink.