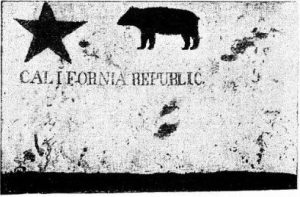 William Todd’s version of the Bear Flag, photographed in 1890 (Wikipedia)

William B. Ide (1796-1852), was the rebellion’s leader and military commander. William L. Todd (1818-1876), one of Ide’s soldiers, helped create the “Bear Flag,” the symbol of the short-lived California Republic and an ancestor of today’s California state flag.

Ide was the classic peripatetic pioneer. A Massachusetts native, Ide migrated to Kentucky and then Ohio before arriving in Illinois in 1838. He and his family lived briefly near Jacksonville, then moved to a farm eight miles east of Springfield in the spring of 1839.

Photo believed to be of William Ide (Wikipedia)

Still restless, Ide joined a wagon train heading west in 1845. The family’s intended destination was Oregon, but at Fort Hall (in what is now southeastern Idaho), Ide convinced much of the rest of the party to make for California instead.

Todd had deeper local roots. The son of Dr. John Todd, the uncle of Mary Lincoln, William Todd was born in Edwardsville and grew up in Springfield. He was unmarried when he enlisted in the same wagon train as the Ides and was one of those Ide convinced to travel to California instead.

Todd initially was disillusioned by what he found in California. He wrote a letter back to his father in Springfield in April 1846, two months before what became known as the Bear Flag Rebellion. The letter didn’t reach Dr. Todd, however, until that August, more than a month after the revolt. The letter was published in the Aug. 13, 1846, Sangamo Journal. He wrote:

If there are any persons in Sangamon who speak of crossing the rocky mountains to this country, tell them my advice is, to stay at home. There you are well off. You can enjoy all the comforts of life – live under a good government, and have peace and plenty around you – a country whose soil is not surpassed by any in the world, having good seasons and yielding timely crops. Here everything is on the other extreme – the government is tyrannical, the weather unseasonable, poor crops, and the necessaries of life not to be had except at the most extortionate prices, and frequently not then.

At least the “tyrannical” government could be corrected. The overthrow of Mexican rule in Califormia coincided with the Mexican-American War of 1846-48. The Bear Flag Rebellion’s main instigator, playing on a number of resentments shared by many immigrants from the eastern states, was explorer and U.S. Army Capt. John C. Fremont. Fremont and his troops, however, played no direct role in the rebellion itself.

Ide, designated “Captain General” or “General in Chief,” led a tiny band of insurgents to take over an undermanned Mexican pueblo near San Francisco.

Emboldened by Fremont’s encouragement, on June 14, 1846, a party of more than 30 Americans under the leadership of William Ide … and Ezekiel Merritt invaded the largely defenseless Mexican outpost of Sonoma just north of San Francisco. … Merritt and his men surrounded the home of the retired Mexican general Mariano Vallejo (1807-90) and informed him that he was a prisoner of war. Vallejo, who was actually a supporter of American annexation, was more puzzled than alarmed by the rebels.

He invited Merritt and a few of the other men into his home to discuss the situation over drinks. After several hours passed, Ide went in and spoiled what had turned into pleasant chat by arresting Vallejo and his family.

Having won a bloodless victory at Sonoma, Ide and Merritt then proceeded to declare California an independent republic. With a cotton sheet and some red paint, they constructed a makeshift flag with a crude drawing of a grizzly bear, a lone red star (a reference to the earlier Lone Star Republic of Texas) and the words “California Republic” at the bottom. From then on, the independence movement was known as the Bear Flag Revolt. 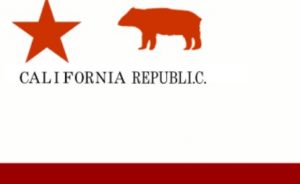 Meanwhile, however, the Republic had produced its famous flag. Todd wrote later that the flag was the work of four of the insurgents, among them Todd and a Norwegian immigrant named Peter Storm. According to many accounts, Storm designed the republic’s very first flag, including a bear as a sign of strength, but the rebels decided that flag’s standing bear “looked too vicious.” A few hours later, according to those stories, that flag was removed and Todd designed a new one, this time with the bear on all fours.

Todd described his design in a letter written 30 years later. A portion of the letter was published by the San Jose Mercury-News in 2013. He wrote:

When the Americans, who had taken up arms against the Spanish regime, had determined what kind of flag should be adopted, the following persons performed the work: Granville P. Swift, Peter Storm, Henry L. Ford and myself; we procured, in the house where we made our head-quarters, a piece of new unbleached cotton domestic, not quite a yard wide, with strips of red flannel about four inches wide, furnished by Mrs. John Sears, on the lower side of the canvas. On the upper left-hand corner was a star, and in the center was the image made to represent a grizzly bear passant so common in this country at the time.

The bear and star were painted with paint made of linseed oil and Venetian red or Spanish brown. Underneath the bear were the words “California Republic.” The other persons engaged with me got the materials together, while I acted as artist. The forms of the bear and star and the letters were first lined out with pen and ink by myself, and the two forms were filled in with the red paint, but the letters with ink.”

Todd’s version had its own artistic problems – many of those who saw it thought Todd’s bear looked more like a pig – and the state flag of California today shows a more sophisticated image of a grizzly bear.

After the republic folded, Todd was more or less ordered to join Fremont’s U.S. Army troops. He served under Fremont until March 1847, when the U.S took full control of California. Among other exploits, Todd was briefly captured by Mexican fighters but escaped. 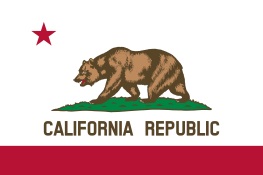 Todd complained in another letter home, published in the Journal in September 1847, that he and others in the same situation received only $20 to compensate for nearly a year of military service.

In the same letter, Todd briefly discussed the Donner Party tragedy, which had occurred the preceding winter, and said he regretted, somewhat, his 1846 letter discouraging people from moving to California.

The letter I wrote you last spring, was written in haste, and before I had seen enough of the country to form a correct opinion about it. I had been at that time, but a few months in the country, and in but one part of it (emphasis in original) – and the rainy season had prevented me from seeing that sufficiently to form an opinion of the whole. Since then I have travelled through the most of the country from the bay of San Domingo (1200 miles south of this) to the head of the Sacramento valley, and I am much better pleased with the country now than I was then.

Still, Todd went on to say, “were I well situated in the States, knowing what I now do, I would never leave them to come here.”

Todd nonetheless stayed in California, and he died in Los Angeles in 1876. His original Bear Flag was destroyed in the fires that followed the 1906 San Francisco earthquake.

Ide has an additional distinction: he is thought to have been the first Mormon to enter California.

Following the rebellion, Ide had a successful mining career and served as a judge and in other local  offices. He died of smallpox in December 1852. He is remembered by the William B. Ide Adobe State Historic Park near Red Bluff in northern California.

Hat tip: To prolific Springfield researcher Richard Hart, who discussed Ide and Todd in a presentation Oct. 1, 2019 at Books on the Square in downtown Springfield.

This entry was posted in Military, Politics, Prominent figures. Bookmark the permalink.