When the DeWitt Smith Building caught fire in 1918, modern firefighting equipment saved the building, and a heroic elevator operator rescued many of its tenants.

Even so, the top floors of the building, on the southeast corner of Fourth and Monroe streets, were heavily damaged by the blaze. The fire began shortly after noon on March 12, 1918. 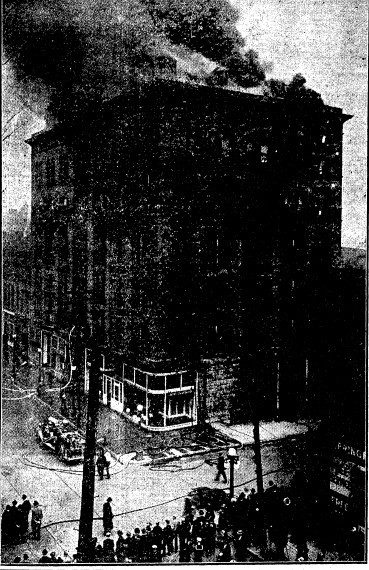 The Smith building, constructed in 1896-97 for the International Order of Odd Fellows, had a confusing configuration. Springfield architect John Rinaker Jr. originally proposed a seven-story structure. The final design was for a six-story building, but a seventh level was shoehorned into what from the outside appeared to be the sixth floor. The original building also had a roof garden, unusual at the time.

At some point, however, the owners had two more floors built on the roof. The addition, which was wood frame, was set back from the edges of the original building, so it doesn’t show in many photos taken from ground level.

The result was that, at the time of the fire, the building had nine floors of various dimensions. The top two floors – the “studio superstructure,” as the Illinois State Register called them in its fire coverage – were where the fire began. The Journal, whose articles on the fire were considerably more confusing, called the addition a “cupalo” (sic).

Whatever the name, the fire apparently began in a music studio operated by D. Spence Wiley on the Smith Building’s eighth floor, part of the rooftop addition. The cause apparently was never determined, but Springfield Fire Chief Peter Jacobs told the Journal the two top floors were a fire hazard.

“That frame superstructure was a regular firetrap and should never have been allowed to be built on top of the rest of the structure,” Jacobs said. “Of wood, and protected by tin as it was, it was so dry that the flames spread in it like tinder.”

The two newspapers differed on who should get credit for discovering the blaze. The Register said the fire was found by “negro janitors” Earl Stevenson and John Williamson. The Journal reported that the first to smell smoke was another music teacher, Ila McClelland, whose studio was on the seventh floor. She and elevator operator Edna White, joined by the two janitors, eventually located the source of the fire in Spence’s studio. All four began warning other people in the building.

Both newspapers agreed that, after starting the alarm process, White returned to her elevator and began ferrying tenants to the ground floor. The Journal reported:

Mrs. J. Harold White, colored, elevator attendant at the burning building on the west wing, was given much well merited credit for sticking to her post, being among the last to quit the doomed structure. Answering the ever ringing and insistent call for the elevator, she gamely kept sliding the shift up and down the shaft carrying employees and office inmates to safety. Panic was a thing unknown to her and even after the first rush of stiffling (sic), black smoke she calmly attended the car.

… With a steady hand and cool head the attendant made possible to use the elevator as the quickest and safest way to open air, avoid(ing) the more dangerous use of fire escapes and stairways.

When she surrendered her car to a janitor, John William (apparently John Williamson, mentioned above – ed.), he made but one trip from the second to the eighth floor and returned, when just as he was clear of the shaft, the car fell to the bottom empty.

The Register agreed. “That Mrs. White’s action undoubtedly prevented loss of life was the opinion of several of the firemen, who pointed out that had all in the building crowded down the stairs, panic would have resulted and some might not have escaped from the place.”

Springfield had purchased its first gasoline-powered fire equipment in 1915, and by March 1918, the fire department was almost fully motorized. The remaining fire horses had been turned out to pasture, and the old steam-powered pumpers, except one, known as “the Old Abe Lincoln,” had been farmed out to outlying fire stations – which were closed anyway (see below).

The Smith building fire “was the first real test for the new equipment …,” the Journal reported. The motorized pumpers passed their exam, pushing thousands of gallons of water a minute up to the building’s original roof. “The performance of all these engines displayed the efficiency of the modern equipment which was recently purchased,” the newspaper said.

On the other hand, the firefighting effort was hampered because the number of city firemen had been cut by one-third – from a force of 77 to 51 – seven months earlier. That was an unanticipated outgrowth of the April 1917 referendum by which voters banned liquor sales in Springfield. The saloon shutdown cost city government $110,000 annually in liquor license fees, almost one-third of its budget. Then, in August 1917, citizens voted overwhelmingly against raising taxes to make up for the reduction.

The city council responded with drastic cuts in police and fire protection, including layoffs and closing all firehouses except the downtown ones. Among the council’s other budget steps were to turn off streetlights and eliminate much of the health department and other city services.

The entire fire department on duty turned out to battle the Smith blaze, but that amounted only to about 30 men. The fire happened during downtown’s lunch hour, however, and thousands of people lined the streets to watch the spectacle. Many spectators, including some laid-off firefighters, joined in to haul hoses up the Smith building’s fire escapes.

“Then came Mr. Volunteer to the rescue,” the Journal said. “The business man laid aside his coat to take a pull at the hose with the man from the shop and factory.”

Another batch of onlookers drove 10 cars out a display window of Harry Stratton-Newman’s auto dealership on the Smith building’s first floor.

The superstructure collapsed in the flames. None of the estimated 20 firefighters on the roof were injured, however, and most of the damage to the building’s lower floors came from water and smoke.

Although total damage came to more than $90,000, some offices were back in operation in the Smith building within days. The reconstructed building did not include a rooftop superstructure. 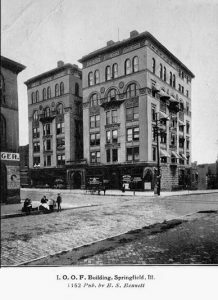 DeWitt Smith (1844-1929), a Sangamon County businessman and farmer, purchased the structure from Odd Fellows stockholders in 1912. Major tenants at the time of the fire included the Illinois Utilities Commission, the Springfield Gas and Electric Co., and the Newman-Stratton dealership.

The United Mine Workers of Illinois bought the building from Smith in 1921. It was the union’s state headquarters for four decades.

According to Shifting Sands: Springfield’s Architectural Legacy, Part 2, by Erika Holst, Curtis Mann and Stephanie Martin (2017), developer Paul Wanless purchased the building in 1964, modernized it (including adding a porcelain/steel façade) and rented it to Illinois Bell. The building remained in use In 2019 as headquarters of the Illinois Department of Children and Family Services.

A July 1918 article in the Journal described Edna White (1891-1951) and her husband, J. Harold White, as leading members of Springfield’s African-American community. “They are members of St. Luke’s Episcopal church, of which he is secretary,” the article said. “They both come from families of the best standing and rank high socially.”

Although records aren’t entirely clear, it appears the Whites divorced sometime before 1930, and Edna White then married Emil Coleman. The Colemans moved to Chicago sometime after 1940. Edna Coleman died there, but she is buried at Oak Ridge Cemetery in Springfield.

In a second referendum held only a month after the fire, city residents, by a bare 200 votes, agreed to a tax increase to restore the lost city services. Finance Com. J. Emil Smith issued a statement after the votes were in:

As soon as arrangement can be made and the necessary men engaged, the fire and police departments will be augmented so that outlying engine houses can be reopened and Springfield be assured of full measure of protection to life and property.