The flag of Ireland lay draped beside the Stars and Stripes at a banquet held at the St. Nicholas Hotel on St. Patrick’s Day 1915. Springfield’s Irish Fellowship, led by the Irish-born Rev. Timothy Hickey, had organized Lá Fhéile Pádraig, the Festival of St. Patrick, to commemorate the saint’s death.  The saint’s portrait, bedecked with green moss bunting, hung in the hotel banquet hall. An electrically illuminated harp – a symbol of old Ireland – also sat nearby.

The evening’s invocation was given by Rev. Daniel Quinn of St. Benedict’s church in Auburn. Along with the food and camaraderie that evening there was the canting of a traditional port a’bhéil, an Irish lilt, by Marie McNamara, Margaret O’Brien and Bernadine McCabe.  Joining in the celebration were families of St. Patrick Parish, who had gathered to hear the night’s main speaker, Sangamon County State’s Attorney Edmund Burke, and to celebrate the 10th anniversary of the consecration of St. Patrick Church. 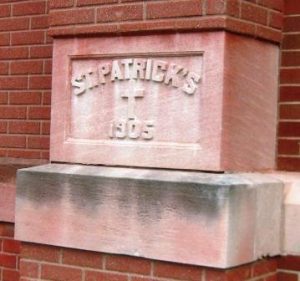 Hickey oversaw construction of St. Patrick Church, which was completed by February 1906 at Wheeler Avenue and Cedar Street.  William Henry Conway (1857-1937), an Irish-American architect and a devout Catholic, designed the church. Conway also designed Springfield’s Sacred Heart Academy and the Ursuline convent and chapel on North Fifth Street, along with other houses of worship around Sangamon County. He had the distinction in 1898 of being the first Springfield-based architect awarded membership into the American Institute of Architects.

Families of Irish descent, some of them immigrants themselves, dominated the neighborhood around St. Patrick, although the area also was home to German, Austrian and Italian residents.

Hickey celebrated services at St. Patrick until 1908, when Rev. Thomas Fennessey was named pastor. The parish built a school in 1910, but the structure was six blocks from the church on the southeast corner of 18th Street (now Martin Luther King Drive) and South Grand Avenue. 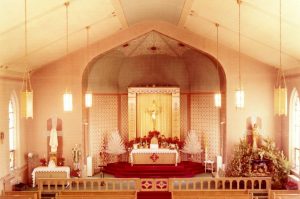 In February 1912, however, St. Patrick’s church building and rectory were hauled by a team of horses to the southwest corner of 18th and South Grand. Fennessey announced the move Feb. 18, saying it would take place “in a few days,” the Illinois State Register reported:

The present church building is of brick and when it is placed upon its new foundation the structure will be considerably enlarged. The parochial residence will also be moved. The church will face on South Grand avenue and when completed will be one of the handsomest churches outside of the down-town district.

The church had to cross the 19th Street railroad tracks, according to an anonymous history of the parish written in the 1950s (available in the Sangamon Valley Collection at Lincoln Library). 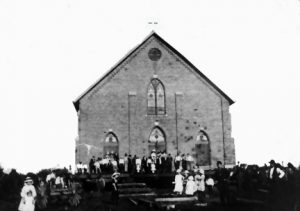 “The story runs that the school children watched the operation from the second floor, praying all the while that no train would come along,” the history says.

The Dominican order of nuns administered the two-story, six-room school, which housed first through eighth grades. However, the school quickly proved far too small.  Classes swelled to more than 100 students, and overcrowding meant pupils sometimes stood during lessons.

In 1915, the church established a dining hall at the Illinois State Fair, proceeds of which went to pay the sisters’ salaries. This also marked the beginning of a long tradition of school and parish fundraising.  The parish operated the state fair dining hall – a tent at first, but later a permanent structure –until 1941. 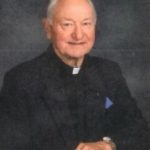 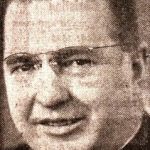 Haggerty was pastor when the church building underwent its most significant expansion in 1953-54. Among other changes, the church was lengthened by 40 feet, pews were added to accommodate 150 more parishioners, and a front archway was constructed, overlooked by a large rosette stained-glass window.

The construction project was completed in time for the parish’s 50th anniversary on March 17, 1955 — St. Patrick’s Day.   At the dedication ceremony, Bishop William O’Connor commented that St. Patrick’s was no longer “an Irish-based church,” an allusion that the neighborhood was changing and growing. 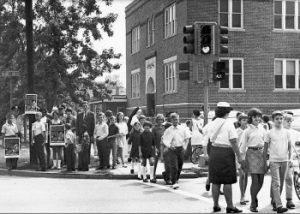 In the 1970s, however, the neighborhood began to change from a predominantly European-descended Catholic community to a largely African-American, non-Catholic section of the city, and numbers fell in both the parish and school. A January 1994 report put enrollment at St. Patrick School, by then a modern, single-story structure, at only 95. Instead of Irish Catholics, most students were African-American and non-Catholic.

Even with the change, St. Patrick School continued to struggle, and the board, facing a long-term deficit projected at more than $500,000, voted to close the school. The announcement, however, prompted a campaign to keep the school open, and supporters raised $300,000 in a matter of months.

“It was a blessing in disguise,” said Sister Marilyn Jean Runkel, a Dominican nun who was president of the St. Patrick School board of directors. “As word got out that one of the city’s long-lasting educational institutions was about to be lost, the community became involved.”

The board developed a long-range plan to keep the school solvent, and in 2018, nearly all the students were covered by a state initiative that helped pay tuition for middle- and low-income families. 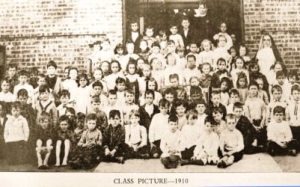 Runkel likened St. Patrick School to a mission. “It is the only Catholic school remaining on the east side of Springfield, and it serves families who are in dire need of extending education to their children. This keeps us going – it’s supposed to be there – it’s an icon”.

In 2015, Bishop Thomas John Paprocki announced that priests from the Chicago-based Society of St. John Cantius would be assigned to serve St. Katharine Drexel Parish. As of 2019, most regular services were being held at Sacred Heart Church, but St. Patrick Church still offered one Mass weekly.