Women served as principals in the Springfield public schools for the first time in the 1874-75 school year, but only following a debate in which some board members declared they opposed “so hazardous an experiment as the employment of lady principals.”

The issue also led to an argument over whether women principals should be paid the same as their male counterparts. Perversely, it was those who opposed the appointments who argued for equal pay.

At the time, Springfield had five public schools: a high school and one elementary school in each of the city’s four electoral wards. The schools were part of city government, and the mayor, with consent of the city council, appointed members of the school board. At the end of one school year, the school board would appoint principals and teachers for the next year 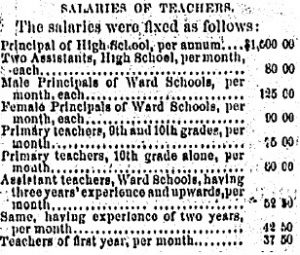 Up through the 1873-74 school year, school principals, who also had classroom teaching duties, had always been men. The rest of the elementary school teaching staffs were women.

On June 6, 1874, however, the nine-member board voted 5-4 to name two women as principals for the next year: Estella Hughes to replace Charles Wilcutt as principal of the Third Ward school; and Carrie Moore to replace A.M. Gardner in the Fourth Ward. Both women previously had been teachers and assistant principals at the same schools.

The votes caused a brief, but vociferous, controversy. The uproar played out in the columns of the city’s two main newspapers, the Illinois State Journal and the Illinois State Register, and at an “indignation meeting” sponsored by those who thought Gardner should have been retained in the Fourth Ward.

Some newspaper letter writers claimed that the board’s majority, led by Dr. D.M. Griffith, wanted mainly to oust Gardner. Wilcutt’s firing, they said, was simply cover for the anti-Gardner effort. The suggestion was that Griffith felt Gardner had gone too far in punishing a student.

Clearly, however, the main point of contention was whether “ladies” were up to the job of principal. Among those who – somewhat surprisingly, in his case – argued “no” was John M. Palmer, who was appointed to the school board in April 1873, just three months after he stepped down as governor of Illinois.

One of Palmer’s first initiatives on the board was to lead the effort to close Springfield’s segregated “colored school” and admit African-American students to the ward and high schools. That change also was to take effect in the 1874-75 school year, though it apparently played no role in the principal controversy.

The Journal summarized arguments about the principal changes made by Palmer and another school board member, R.P. Johnston.

Gov. Palmer and Mr. Johnston expressed the opinion that the placing of lads entirely under the government of women was dangerous. Women were good teachers, but they did not believe (women) were fitting examples to the elder boys under the immediate direction of lady principals. The philosophy of life required the combined example of both sexes in moulding the character of the youth. Both gentlemen were opposed to so hazardous an experiment as the employment of lady principals.

For his part, Griffith denied any personal objection to either Gardner or Wilcutt. The main reason for replacing the two men with women, he said, was to save money – female principals in the ward schools were paid $90 a month under the school salary schedule, while male principals received $125. In that case, the former principals’ supporters asked, why weren’t male principals also replaced in the First and Second Ward schools?

In a letter to the editor published in the Journal, a pro-Gardner citizen (he or she signed the letter “Parent”) asked the other obvious question:

Why this great difference in salary? The lady Principals of the Third and Fourth Wards are expected to teach the same number of children (probably more) as their male predecessors did; they will be on duty the same number of hours, days and weeks that the former Principals were; and in all respects they are selected to fill the places and do the duties of male Principals. … Their education and experience are equal, doubtless, to the requirements of their male co-laborers, in other words. Then why this discrimination against the ladies? If the lady Principals are fitted for the positions to which they have been appointed, by all means pay them the same salaries as male teachers of the same grade.

Gardner’s backers also pointed out that a majority of Fourth Ward voters (all of whom were male) had signed petitions supporting Gardner’s retention as principal, but the ward’s two school board representatives, Griffith and E.P. Burlingham, voted to fire him. People attending the July 16 “indignation meeting” passed a resolution calling for both to resign.

“(By) their arrogant tone to the people and dictatorial course pursued (they) have shown themselves unworthy public servants and forfeited our confidence and respect as such,” the resolution said.

None of the majority school board members took the meeting’s advice, and the dispute faded well before school resumed that fall. Charles Wilcutt opened a private school for 1874-75, and both he and A.M. Gardner are listed as teaching in the Sangamon County Normal School (the county teachers’ training school) in June 1875.

Estella M. Hughes had been a Springfield teacher for about 15 years when she was named Third Ward principal. She apparently showed some administrative talent before that – when women were ruled eligible to serve as county school superintendents in 1873, a letter to the Journal suggested she be considered. “Her experience, quickness of perception and other necessary qualifications make her peculiarly fit,” the anonymous writer said. There’s no indication Hughes considered the idea, and Sangamon County didn’t get its first female county superintendent until 1892.

Hughes remained Third Ward principal through the 1877-78 school year. An 1880 newspaper article said she was principal of the intermediate grades at the Bettie Stuart Institute, a prestigious private school for girls. She returned to the public schools as an elementary teacher at Edwards School for a period, then moved to Bloomington sometime in the 1880s.

This entry was posted in Education, Local government, Schools and school districts, Women. Bookmark the permalink.