Springfield in 1939, according to the Federal Writers Project

Editor: This entry, originally published in 2014, has been revised and expanded.

Illinois: A Descriptive and Historical Guide was part of the American Guide series, which profiled each of the then-existing 48 states during the 1930s. The American Guides were the best-known project of the Federal Writers Project, a subdivision of President Franklin D. Roosevelt’s Works Progress Administration, which provided work relief to millions of people during the Great Depression.

According to Wikipedia, the FWP employed an estimated 10,000 people between 1935 and its official end in 1943 (the bulk of the FWP’s publications were completed by 1939).

The Illinois Guide was published in 1939 (and reprinted in 1983 with a new introduction by Neil Harris and Michael Conzen). Below is what it said about Springfield: 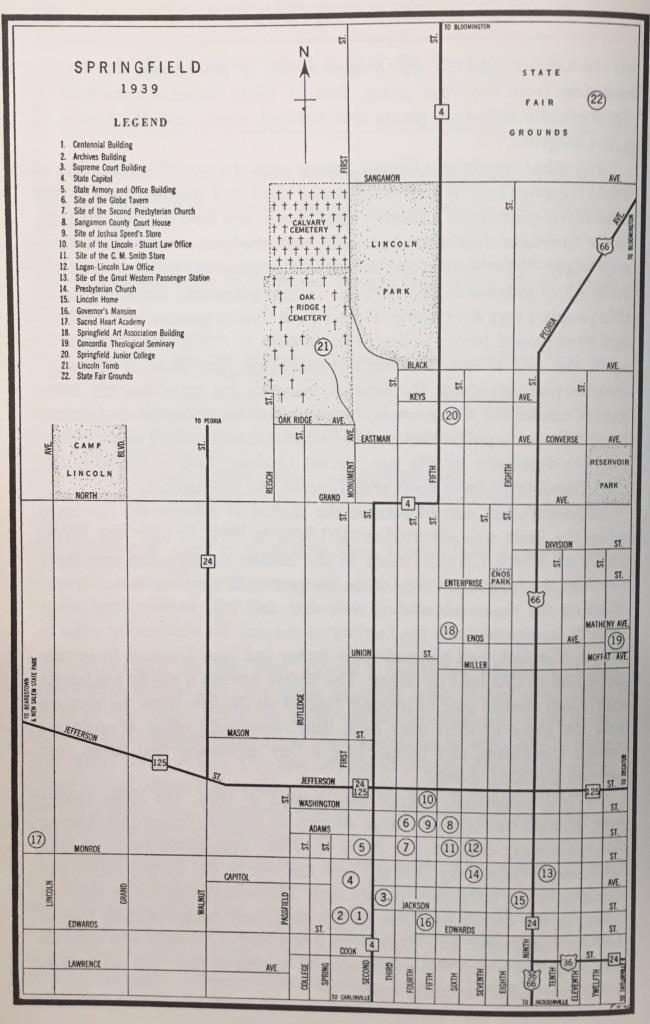 Partial map of Springfield in 1939, with “points of interest” identified (Illinois: A Descriptive and Historical Guide)

SPRINGFIELD (71,864 POP., 598 ALT.), capital of Illinois, and the State’s fifth largest city, lies some 20 miles west of the geographic center of the State. From the softly rolling prairies that stretch for miles in all directions the dome of the Capitol can be seen, announcing Springfield long before the first scattered homes come into view. Large farms, shadowed here and there with a mine tipple, extend to the city’s door. For Springfield, capital of a farming and coal mining State, reflects its basic industries.

The city proper manifests both the well-ordered spaciousness typical of capital cities, and the disorder of smokestacks and railroad yards that attend factories and mines. Ninth Street, a north and south thoroughfare paralleling a railroad, divides Springfield roughly into capital and industrial areas. West of Ninth Street lie the business section, the great landscaped quadrangle of State buildings that center on the Capitol, and the wide shaded streets of fine houses that border and stem from the State group. East of Ninth Street are the bulk of Springfield’s industrial plants and railroad yards, and the homes of 3,324 Negroes.

No other city in the United States, with the possible exception of Washington, D.C., is such a tribute in itself to a national hero. More than three-quarters of a century ago Lincoln left here for Washington, never to return alive, and at the old Great Western station told a farewell party, “My friends, no one not in my situation can appreciate my feelings of sadness at this parting. To this place and the kindness of this people I owe everything. Here I have lived a quarter of a century, and have passed from a young to an old man. …” The mark of Lincoln upon the city is now well-nigh ineradicable. Bronze placques (sic) mark the sites of many of his activities, his name graces one of the finest hotels, his tomb and his home are maintained by the State as public shrines, and notable contributions to American poetry – especially by the late Vachel Lindsay, long a resident, and Carl Sandburg – have dealt with Lincoln and Springfield. …

Since the closing decades of the nineteenth century Springfield has closely paralleled the State in growth. In 1914 the capital was chosen for one of the several sociological surveys made by the Russell Sage Foundation; the detailed findings of this wok, published in 1918, proved of great aid to local social welfare organizations.

A comprehensive plan, making numerous suggestions for a long-range program of civic improvement and stressing Springfield’s function as State capital in its city layout, was drawn up by Myron Howard West and a staff of the American Park Builders in 1924. At present the plan has been fulfilled only partly, but the work is progressing. The major civic project in Springfield’s history, the creation of artificial Lake Springfield, was approved in 1930, a bond issue was voted, and the immense job was carried out with the aid of Federal funds.

2 Responses to Springfield in 1939, according to the Federal Writers Project