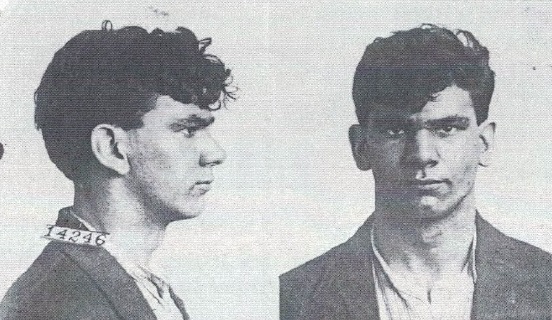 This entry has been updated with the photos above.

Diaz (1897-1975), an immigrant from Spain, claimed he had made the liquor “only for his own use ‘cause he needed a drink after the country went dry,” the Illinois State Journal reported June 1.

The 18th Amendment to the Constitution, which banned the manufacture and sale of almost all liquor in the U.S., was passed and ratified before Diaz was arrested, but it didn’t go into effect until January 1920. The Illinois State Journal nonetheless labeled Diaz “the first Springfield moonshiner.”

Officials seized the whiskey at a saloon operated by Frank Diaz, Servia’s brother, at Ninth and Madison streets. Diaz’s tavern apparently operated openly, even though the city of Springfield had enacted its own prohibition ordinance in 1917.

Both brothers were arrested, and Servia was charged with failing to pay a federal tax on his whiskey stash.

Diaz made the whiskey in the basement of his home in Devereux Heights, then outside the northeast city limits. He claimed he didn’t know the name of the man who sold him the still. According to the Journal’s story:

“I met the man who sold stills in my brother’s place,” said Diaz in beginning a detailed account of his whiskey making career. … “He said he would get me a still if I would pay him two dollars down, and thirty-eight dollars when he delivered the goods. I paid the two dollars, and a little over a week ago the still came. I built a brick furnace in the basement at home and there set it up. I bought my corn and yeast and made my first mash last Monday. I run off the fourteen gallons of whiskey from this mash.”

He added that he had taken the moonshine to his brother’s place only to compare it to the whiskey Frank Diaz sold.

“I was afraid it might be poison,” Servia Diaz said. “You know I didn’t want to sell it, but this country is going dry, and fourteen gallons would last me a year, and then I could make some more.”

Servia Diaz pleaded guilty a month after the arrest. He was sentenced to four years in Leavenworth federal prison – he ultimately was paroled after two years in custody – and to pay a $600 fine. Frank Diaz, who denied knowing anything about his brother’s distilling activities, apparently was never prosecuted.

In 1925, the Diaz brothers opened what may have been Springfield’s first car rental business. Their  partner in that enterprise was Thayer native Bryan Bolton, who went on to gain criminal fame for his connection to the 1929 St. Valentine’s Day massacre and as a member of the Barker-Karpis gang of hillbilly mobsters.

At some point, Servia Diaz moved to Decatur, where he died.

Frank Diaz (1895-1969) later operated a series of taverns in Springfield, including the Bungalow, 111 North Fifth St., the Riverside Club on North Fifth Street Road, and The Windsor, 425 E. Monroe St. He also was a suspected bookmaker, according to several newspaper stories, although it’s not clear if he was ever prosecuted.