The alfalfa train was an automobile caravan that traveled to the ends of Sangamon County for five days in June 1913, carrying experts who preached the gospel of alfalfa hay. 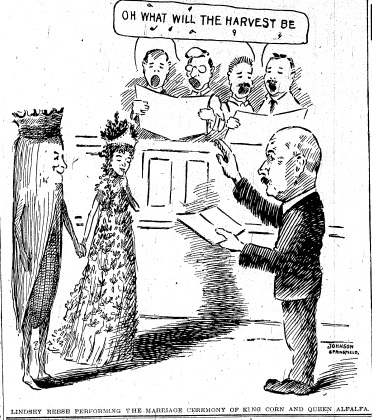 “The marriage of King Corn and Queen Alfalfa” was a metaphor coined by Lindsey Reese of Pana, one of the alfalfa train’s main speakers. The idea was that corn depletes soil nitrogen, while alfalfa replaces it. (Cartoon from the June 7, 1913, Illinois State Journal, reprinted courtesy State Journal-Register)

Over the five days, the half-dozen alfalfa advocates and dozens of supporters drove more than 300 miles and spoke at 40 to 50 meetings held at hotels, village halls, and farmers’ lawns and living rooms. After the final round of meetings on June 7, 1913, the Illinois State Register – both the Register and its competitor, the Illinois State Journal, covered the alfalfa tour in boosterish fashion – estimated the train reached between 8,000 and 10,000 people and distributed 100,000 pieces of literature.

Alfalfa is more nutritious as a livestock feed than many other grasses. It also rebuilds soil nitrogen. However, it’s also trickier to plant than some crops – a field planted in alfalfa for the first time must be “inoculated” with bacteria to encourage root growth. As a result, although Illinois had had alfalfa pioneers for decades, it hadn’t reached its potential, organizers of the alfalfa train believed.

The named sponsors of the auto tour were the Illinois and Sangamon County Alfalfa Growers Associations along with the influential Illinois Farmers’ Institute, whose president, Scott County farmer A.P. Grout, was among the state’s most vocal alfalfa advocates.

Behind the scenes, however, was farm equipment manufacturer International Harvester. IH’s president, Cyrus McCormick, subsidized Dr. Perry Holden of Iowa, the nation’s best-known alfalfa expert, in his efforts to persuade more farmers to plant the crop. (IH got no direct benefit from wider cultivation of alfalfa, which required no different equipment than any other hay crop, but McCormick reportedly believed that when farmers prospered, they naturally bought more equipment.)

Holden spoke to farmer gatherings the first two days of the Sangamon County tour before heading to Ohio for a similar series of meetings.

The alfalfa train paraded through Springfield June 3 on its way to its first stops in Cantrall, Sherman, Williamsville and Buffalo. Each day’s itinerary included stops at existing alfalfa fields and speeches – eight or ten a day – to farmer meetings, with stopovers for lunches provided by women’s groups or churches. The out-of-town experts usually slept overnight at local hotels or in farmers’ spare bedrooms.

The whole of Williamsville shut down when the tour arrived in that community. The “X.X.O.B.” band – initials not explained – greeted the travelers, and local women provided a lunch for 1,000 people in the “large stables of Taylor & Jones, the well-known horsemen,” the Register said.

The next day saw meetings in Illiopolis, Rochester and elsewhere.

The whole populations of some communities turned out for the show, amateur photographers among them.

“Several small kodaks made their appearance yesterday and the members of the touring party will have remembrances which tell the truth, the whole truth and nothing but the truth,” according to the Register’s second-day story.

Day 3 took the tour to Pawnee (where a bagpiper substituted for a marching band welcome), along with Divernon and Chatham. The next day, the itinerary took in Curran, Auburn and Loami, and the alfalfa train concluded June 7 in New Berlin, Pleasant Plains and Auburn.

The complicated tour ran into some inevitable hitches. A naysayer in Illiopolis complained that the experts’ advice about alfalfa implied local farmers had been mismanaging their acreage for nearly a century. “Skeeter” Reed, who drove the press car, had to repair a couple of blown tires. And the pathfinder car that led the caravan took a couple of wrong turns.

The tour also got some bad guidance in Lowder, when organizers asked for directions to the “Workman farm.”

Directions were given to the B.F. Workman farm three and a half miles north of Lowder, and thither the “Pathfinder” car hurried to blaze the trail for the cars which followed.

Arrived at the farm home of Mr. Workman, it was found that the men were in the field, and that the women of the house had heard nothing of the proposed meeting at their place.

Further inquiry developed the fact that the place meant was the Webb Workman farm, four miles out of Loami. The auto engines were pushed a little more, and paper was generously scattered at all road turns by occupants of the “Pathfinder,” with the result that the first section of the train reached the right place less than fifteen minutes late.

The Register declared the alfalfa train a triumph.

The tour was a success from the first day until the last, according to the speakers and members of the tour. Interest was at the highest pitch during the entire campaign and farmers from this county and adjoining ones traveled several miles to hear about alfalfa. The speakers figure that anyone who will travel some distance and leave their work to do it want to know about alfalfa badly. These men will undoubtedly be alfalfa growers.

“We feel decidedly ‘chesty’ about this,” reported A.H. Leinbrook, IH’s general agent in Springfield, “as the people are freely giving the Harvester Company’s agricultural extension department credit for these results.”

This entry was posted in Agriculture, Farming, Science, Soil. Bookmark the permalink.